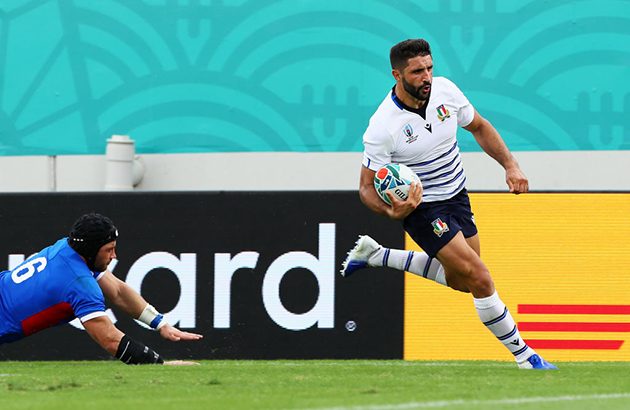 Italy and Namibia started off their Rugby World Cup (RWC) campaigns looking to get the better of each other in a tight affair.

Namibia got off to a fine start in the fifth minute when an Italian lineout didn’t go to plan and the Namibians took full advantage of it. Scrum half Damian Stevens finished off the run and Cliven Loubser added an extra two points for an early 7-0 lead.

The Italians immediately tried to get back into the game, driving Namibia further and further back. A penalty try was awarded for the Italians when Namibia collapsed their scrum near the try line.

A fantastic run by Italian fullback Hayward and his winger Padovani brought Italy to the 5-metre line for yet another scrum. Sergio Parisse believed he had gotten his 17th career try when he got over the line. However, a penalty was given for an earlier offence.

After a comedic moment involving Parisse and referee Nic Berry, the Italians tried again to score but just couldn’t get over the line.

Italy finally managed to do so when inside centre Luca Morisi broke through the Namibian defence. The ball fell to Tommaso Allan to finish the run. Allan then converted to put seven points between the sides.

Stevens did his best to disrupt the Italian scrum throughout the game and Italy’s own errors helped Steven’s cause.

Tiziano Pasquali went off injured just before half time but Namibia could not capitalise. Italy, however, could, with Tito Tebaldi finishing off a try made by Ruzza. The half ended with Italy fourteen points ahead at 21-7 after Allan’s conversion, the scoreline not reflective of the Namibian efforts.

Italy started the second half brightly, with Benvenuti playing a lovely kicked pass to Padovani who was open to score. Tommaso Allan converted their bonus point try with ease, before coming off for Canna.

Italy’s handling errors continued as they came close once again but Minozzi failed to control the ball, due to the heavy rain most likely.

A minute later, Carlo Canna thought he had put the ball down, but TMO Marius Jonker had to confirm it before Canna could celebrate. Canna then converted his first kick of the game.

Namibia got three back after Italy conceded a penalty for not releasing, Loubser popping it over. They didn’t give up, even though the game was already over, a credit to them.

Namibia got what they deserved in the 57th minute when JC Greyling took advantage of a disconnected Italian defence, his 14th try in his last 16. Loubser missed the conversion, the tough angle proving to be too much.

As the game reached its close, both teams grew sloppy in their passing and the quality lowered. Repeated knock-ons made any possible chances void.

A Namibiam error in the scrum led to a try for Italy, Polledri touching down with little opposition. Canna could not convert but I get the feeling he wouldn’t have lost sleep over it.

Minozzi grabbed the seventh try for the Azzurri, with Canna adding the extra two. The score, at this point, was rubbing salt into Namibia’s spirited wounds.

Namibia grabbed their third try right after with an excellent score by Chad Plato, converted by Loubser.

The game finished with 10 tries in total, Namibia, unfortunately, missing out on their try bonus point.

For the Namibians, this was a good game, the loss aside. A great display of their qualities today, the African side showed the world why they’re at the RWC with a never-say-die attitude, one to be proud of. Their only hope of points is Canada and they might not even beat them – I doubt any Namibian fans will care as long as their team keeps playing with pride.

As for Italy, they could have done better. A tier 1 nation shouldn’t have this much trouble against a lower rated team. This is why they won’t beat South Africa, certainly not New Zealand. This Azzurri side will probably not affect Ireland’s possible quarter-final but they might have a go.

However, both teams gave the world a great game of rugby, showing how beautiful the game can be, even with flaws. The sport is sure to get more popular after this RWC.