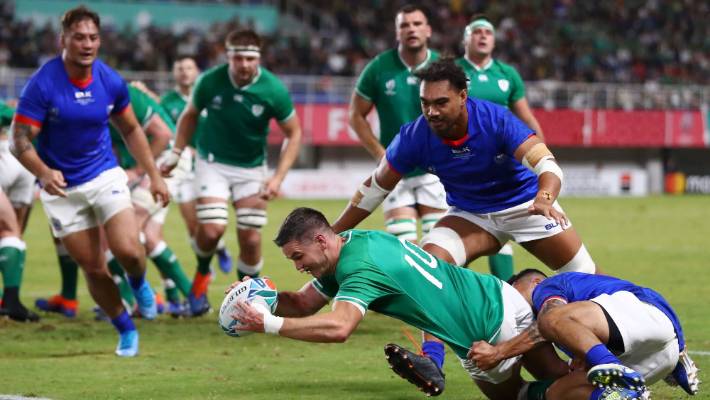 Ireland concluded their Rugby World Cup (RWC) pool with a match against Samoa.

Ireland were looking to redeem themselves after their disappointing displays in previous games and advance to the quarter-finals.

Samoa, already on their way home, were looking to spoil the party and send the previous world number one packing.

The two played out the tie on a woeful pitch, a result of poor weather conditions currently ongoing in Japan.

Indeed, the controversy surrounding the weather conditions have been discussed more than any on-field action at the tournament so far, with the fate tomorrow’s Scotland-Japan game, at time of writing, still up in the air

Ireland started as they meant to go on, controlling the game, leading to an early try for Rory Best from our trademark lineout.

The TMO checked for a potential ruling out of the try but referee Nic Berry let it stand.

Sexton converted to add something extra to a perfect start.

The TMO was back in business a moment later, leading Berry to give Samoan hooker Lam a yellow for a high tackle on Henshaw.

Irish dominance continued with Tadhg Furlong touching down for our boys in green. Sexton kicked between the posts once again to grow Ireland’s early lead even further.

A string of small mistakes could have proved costly for Ireland with lucky knock-on by outside centre, Leiua.

A fantastic lineout, coupled with great hands, led to Sexton touching down after some brilliant play by Jordan Larmour. Sexton converted with ease to compliment his own try.

Confidence began to seep into Ireland but this turned to cockiness and the Samoans intercepted and forced a penalty.

Jack Lam punished the Irish for their cocky plays with a humbling try for Samoa. Henry Taefu missed what seemed to be an easy kick.

Sloppy Irish passing led to a concerning collision between Bundee Aki and Samoan fly half Seuteni. A clear red, meaning Ireland had to finish the rest of the game with 14 men. Ireland’s first red card in RWC history.

Ireland managed to pull themselves together before the half ended and grab their bonus point try, Sexton the scorer. However, he could not convert the kick, but it did not matter – Ireland were where they needed to be.

Ireland came very close to adding a fifth early on in the second half but not close enough as the TMO showed.

Larmour added the fifth after a brilliant pass from UL graduate, Conor Murray – a display of the Munster man’s quality. Sexton finished off his outstanding performance with another two points.

Ireland didn’t relax their approach after Murray and Sexton came off, pushing for more even when the game was over.

Flanker TJ Ioane was binned for repeatedly infringing at the ruck.

Another TMO decision refused Ireland a try. CJ Stander added a sixth only minutes later, however. Carbery added two points to the scoreline with his conversion.

Andrew Conway added Ireland’s seventh try, putting some sparkle on an already finished game. Carbery made it 47-7 with a fantastic kick.

Another TMO decision ruled out a try – this time for Samoa.

Ireland will be satisfied with their win, a quarter-final beckoning. However, their handling is still not up to scratch at times – if it were Cheslin Kolbe or Beauden Barrett who intercepted, the outcome would have been a lot more lethal.

A quarter-final appears to be the outcome for Ireland, with South Africa being most likely due to Typhoon Hagibis.

The Samoans will return home with their head held high, knowing they never gave up in any of their games and made their country proud.

Hopefully, tomorrow’s games go ahead, for rugby’s sake, but I don’t think Irish fans will mind.

A quarter-final berth will surely calm nerves, whoever the opposition is.

UL begin season with narrow loss to Waterford IT