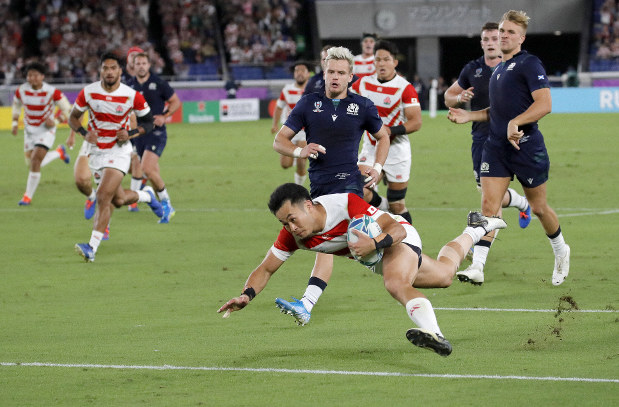 Japan and Scotland faced off in the final pool game of the 2019 Rugby World Cup (RWC).

After the worries concerning Typhoon Hagibis, the game was allowed to go ahead, much to the delight of Scottish, Japanese, and neutral fans everywhere.

With a win (or draw), Japan would finish Pool A as the winners and face South Africa in the quarter-finals, a rematch of the biggest shock in RWC history.

Scotland had a tougher challenge.

They had to beat the Japanese, not allowing Japan the two losing bonus points – score four tries and lose by seven or less. Scotland could win without a bonus point, considering Japan didn’t get one, as well as win, providing they have the same amount of bonus points.

A huge challenge, one Irish fans can enjoy without much care.

It was always destined to be a brilliant game.

A moment of silence was held for those who passed and those who are missing due to Typhoon Hagibis.

The terrible conditions and consequences were sure to give Japan extra reason to rally behind their team.

This was evident during their national anthem; a beautiful, emotional rendition belted out by the home fans.

The Scottish contingent offered a rousing rendition of ‘Flower of Scotland’ in return – the hype for this game evident.

A fantastic start from both teams got hearts racing, due to brilliant play from Japan’s Lafaele and Scotland’s Russell.
Scotland capitalised on a kick from Russell, with Magnus Bradbury winning it back, leading to Russell getting over the line early.

Japan responded dangerously, getting into Scotland’s 22.

Scotland defended brilliantly, turning it over and getting it away.

Having not conceded since the heavy defeat to Ireland, the Scottish were starting to display some defensive consistency.

Tamura came up short with his first kick of the game, an unusual sight for such an in-form player.

A minute later, the dangerous Japanese wings combined to put Matsushima in for a try.

A fantastic play by their deadly wingers set the game alight, with Yu Tamura making up for his last kick with his conversion.

Jiwon Koo, Japan’s tighthead, was forced off through injury. 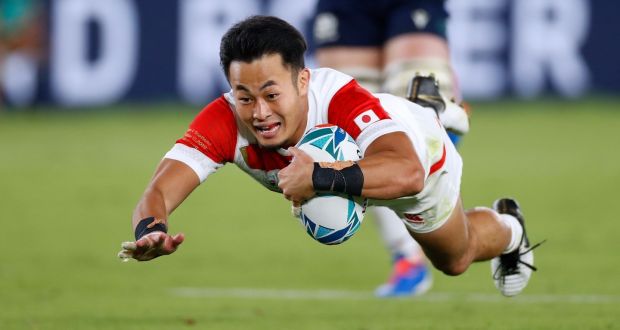 Asaeli Valu replaced him in the lineup.

The emotion of missing such a big game as this was painted all over his face.

Japan kept up their pressure through brilliant scrummage and attacking play.

The pressure paid off with a fantastically set up try for loosehead Keita Inagaki.

Tamura knocked the extra two over with ease.

Scotland’s once consistent defence was in danger of inconsistency throughout the game due to the sheer brilliance of Japan’s handling, a mirror image of the first 10 minutes.

His 6’7” frame was enough excuse to let him off.

Tamura missed the chance to take the host’s lead to double digits with his penalty veering left.

It didn’t matter, with an absolutely outstanding try, Lafaele breaking Scotland’s defence with a perfect kick for the electric Fukouka.

After Tamura’s crisp conversion to finish the first half, I think we all had the same question in our mind – how the hell is this Japanese team tier 2? A phenomenal first half from the hosts. This Japanese team has been the most entertaining team to watch this tournament. The fact it’s in Japan this year makes it even more special.

Surely tier 1 beckons after their RWC? The funding should be thrown at them after this.

The second half began with a fantastic strip by Fukuoka, who of course ran all the way, Tamura converting.

Scotland realised the situation they were in and woke up.

Ritchie and Hogg made huge metres to help tighthead Nel get over the line. Laidlaw converted to complement Scotland’s work.

Pressure mounted on the Japanese defence and another try came from it, Fagerson scoring after a fantastic offload by Jonny Gray.

Japan had their share of the ball for the next few minutes, but the Scotsmen turned it over with brilliant defending.

Tempers flared and put a stain on a fantastic game – a consistent narrative of this otherwise brilliant RWC.

Scotland maintained their pressure, with Japan weathering the storm.

Japan held on to progress to the quarters, facing South Africa next Sunday.

A brilliant match-up that will surely be one of the best in this tournament.

The two share many similarities as well as some history.

Japan are also now the first Asian team to make the RWC quarter-finals.

A massive achievement for a fantastic squad.

Scotland head home after this loss.

A monstrous second-half effort wasn’t enough for the Scotsmen, and they were sent packing.

Ireland are now confirmed to play New Zealand. They’ll need to be at their best to beat the All Blacks, but the nation will be behind Conor Murray and the rest of the Ireland squad, hoping for another improbable victory.

That’s the pool stage over, and what away to end it.

Certainly, the best game of this RWC so far.

The IRB MUST take notice of Japan.

For now, the fairytale continues for the host.