“I was young enough to be compelling to them by virtue only of my youth, standing in as a monument to whatever things they felt they no longer had access to.” 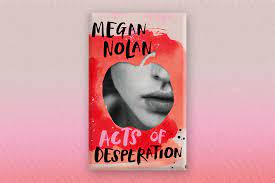 This hotly anticipated debut from the Waterford-born Megan Nolan is a self-assured anti-romance, detailing an obsessive relationship’s collapse.

This self-exploration starts in Dublin in 2012 and chapters are aided with from the more mature narrator reflecting from Athens Greece seven years later,  punctuating accounts of self-destructive narrative with maturity and insight.

An art critic Ciaran becomes the subject of the narrator’s obsession, but this is far from a love story.

It details the entire relationship, with the failings of their love analysed throughout.

Nolan is an established talent, marked by the popularity of her essays published with The New York Times, The New Statesman, and The Guardian.

While the novel embodies her analytical explorations of identity and love, it also veers into an upsetting trauma of a failed relationship, and the novel often feels like a case study of catastrophes.

A trigger warning is in order for those sensitive to themes of self-harm or eating disorders with an uncompromising detailing of mental health issues throughout.

What prevents this novel from becoming melodramatic is the insight from a wiser, self-aware narrator reflecting on her naivety and shortcomings.

This dynamic propels the novel from harrowing to daring.

“Mediating your own victimhood is just part of being a woman,” informs a fearless narrator who reflects on topics such as youth, femininity, and sexuality while detailing the all-consuming relationship.

While a compulsive read, the stark and analytical honesty of obsessive love can often veer into a claustrophobic narrative.

Facing the idea of victimhood straight on, there is an element of exhaustion experienced by a reader stuck with a problematic and destructive narrator’s unrelenting accounts that border on self-indulgent.

The obsession rarely allows rebuttal from any other perspectives, even with the more neutral and informed narrative from Greece failing to relieve this hyper-focus.

This taut narrative becomes devastatingly brilliant in dealing with youth. There is a strong sense of urgency to the unnamed narrator’s words when addressing selfhood, aware of the impossible standards held by the patriarchy towards young women.

This is where Nolan’s pinpoint observations cement this novel as excellent, transforming from a doomed romance to a detailed observation of a generation’s challenges:

“I was young enough to be compelling to them by virtue only of my youth, standing in as a monument to whatever things they felt they no longer had access to.”

An exploration of the sexual monopoly of youth is so perfectly articulated in Nolan’s writing. It is sharp with clarity and insight and vibrant with passion fuelling the words.

While the subject matter may veer into grim self-destruction, Nolan’s talent manages to make a single flawed relationship analyse aspects of life detailed with unique articulation and insight.

This harrowing exploration of selfhood marks Megan Nolan’s ascent into becoming the defining voice of her generation.