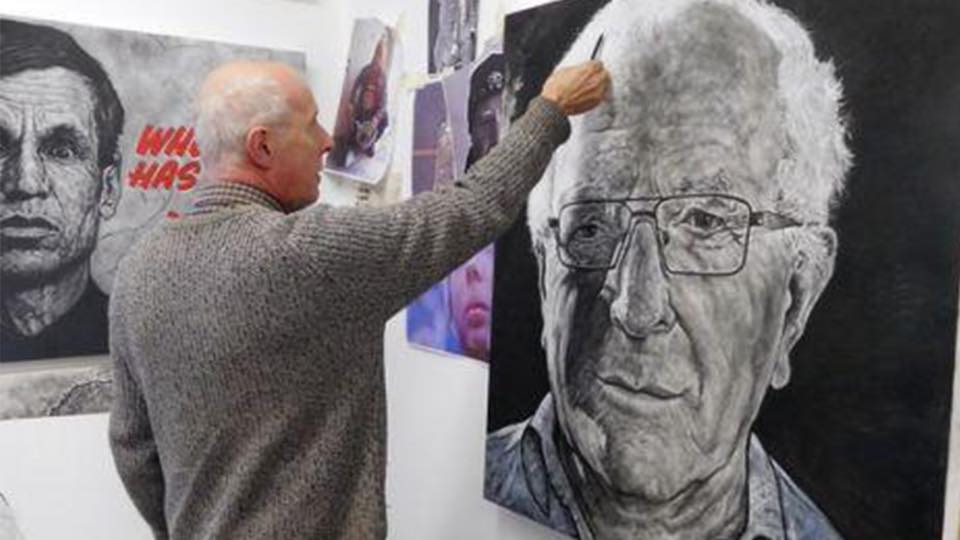 Limerick is a flourishing artistic hub, with many creatives inspired by the city due to its vibrant residencies and an internationally renowned art college.

Artist and educator Jim Furlong takes inspiration from the city. A resident of James Street Studios, the painter often sketches from life to produce his critically acclaimed work.

He continues to produce art in his studio, however the deserted streets are lacking the inspiration his work usually thrives on.

Despite art often being assumed as solitary, Jim’s inspirations are firmly rooted in community and people are an important component of his creative process.

“Doing the work can be solitary but finding stimulus and your ideas would take root in a community and be influenced by other people, a two-pronged thing- one solitary, and one very social,” said Jim.

Jim is originally from Worthing, Sussex. After working as a sign writer for years, he returned to education in the Limerick College of Art and Design and developed his distinctive style of using charcoal to create pop art-inspired portraiture.

He graduated with a First Class Honours degree and was the recipient of the 2016 Tom Fox Painting Award, an annual accolade bestowed on an outstanding graduate of that programme.

He also received The Revenue Commissioners Innovation Prize and his work has been purchased by the Irish State Collection, with his critically acclaimed exhibitions exploring themes of masculinity, popular culture, and alienation.

Jim now shares his expertise as a teacher, renowned for his engaging art lessons at the Limerick College of Further Education (LCFE).

His night classes cater from beginner to advanced level, with many students returning each term to expand their knowledge and learn from their fellow classmates.

“I really miss the art classes because I have always enjoyed them and the people I have met.

When you join a class, there is a group dynamic where everyone comments on each other’s work,” noted Jim.

Despite being a highly technical artist, his ethos is to make art as accessible as possible to anyone interested in learning.

“I see myself much more as a facilitator in creating a comfortable and stimulating environment rather than a big job pouring loads of water into small glasses.”

The educator believes social engagement in classes is a key to the creative process that often provides a much needed outlet to people.

“Much as the same way as you would go jogging with necessarily entering any sporting events, you do it for your wellbeing it’s much the same thing,” Jim said. “I get a satisfaction out of opening new avenues for people creatively that they wouldn’t necessarily be aware that they did have.”

Art classes provide a means of two-way communication for Jim, with students often inspired by their creative classmates.

The dynamic range of attendees often takes up different mediums inspired by their peers and nurtures friendships with like-minded creatives.

“You view art in a certain way, through a particular lens, and then when you meet other people they expose you to a different way of looking at it,” said Jim.

While the restrictions have postponed the classes for now, the benefits of attending a night course in art are endless.

“I think an art class creates a feeling that when you are gathered with a people of like-minds, you feel that what you are doing is important and necessary because you see the ideas and results of creativity,” said Jim. “It creates an importance to what you are doing.”

The skilled painter continues to work on his own personal projects while also looking forward to returning as an educator.

When the art classes resume, Jim hopes to continue encouraging his students in the process of creating without being deterred by critics.

“I feel very passionate about art, but I’m not so interested in creating the fantastic masterpiece,” said Jim. “I’m more interested in people using art and painting as a means of enhancing their life.”