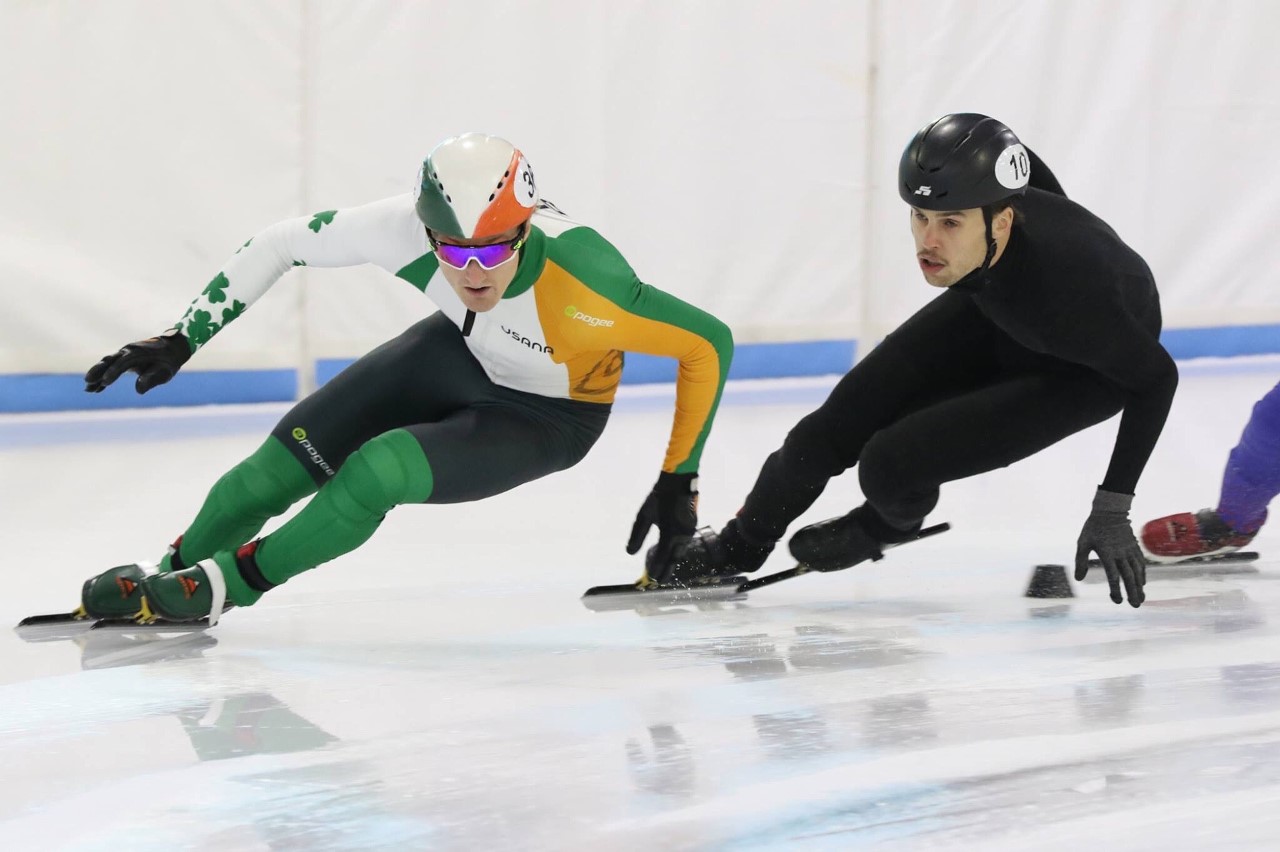 “I want the next generation of kids to be able to represent their country.”

Ryan McAnuff is not your average medical student. He was born in Canada but is speed skating for Ireland while combining running a business and trying to become a doctor.

The 24-year old’s grand parents lived in Belfast before moving to Canada. He held dual citizenship from a young age, like the rest of his family.

His aim is to represent Ireland on the world stage but also to inspire children to take up the sport.

He said: “When I’m finished speed skating, whether it be in the next year or ten years, I want the next generation of kids to be able to represent their country in this sport.”

Ryan competes alongside his younger brother Seán, who currently lives in Canada, with the pair representing Ireland at the European Short Track Speed Skating Championships in Holland last January.

The older sibling lives in Limerick but he cannot train on ice in Ireland which makes preparing for major competitions difficult.

He stated: “We have no permanent speed skating rinks in Ireland. We hope this changes in the future but for now we make do with what we have.”

He was unsure whether he would compete in the Championships due to his lack of training on ice but he returned to Canada for Christmas and practiced.

The hard work paid off as he broke the national record time that he had previously held for the 1,500 metres. He recorded a time of 2:14.413 which was more than three seconds faster than his previous best.

The inability for him to train on ice is problematic but McAnuff is keen to look at the positives.

The speed skater has access to facilities in UL, Limerick and Dublin to help keep him fit for the demands of speed skating plus he is hoping that a permanent ice rink will be opened in Dublin sometime in the future.

Himself and Seán trained in Holland two years ago and would fly over to Dublin every week for a two-hour training session with children in ice rinks that were opened for the Christmas period.

He stated: “The problem for us is the fact that it is hard for kids to be attracted to it when they can train only once a week for seven weeks.”

The Irish-Canadian is the third oldest of four siblings. Patrick and Conor are the oldest while Seán is the youngest. The first-year student admits it can be tough competing alongside a sibling.

He laughed as he said: “I am the older of the two so I always try to be better than him.”

“We were very close growing up and we push each other to try and constantly improve.”

The Irish Skating Association of Ireland (ISAI) contacted the brothers about representing their grandparents homeland in 2014 and they came over in early 2015.

At this time, ice skating was the only sport that the ISAI represented in Ireland.

The pair volunteered to coach people from the ages of 3-60 to speed skate before the International Skating Union (ISU) granted Ireland provisional membership for speedskating.

Since then the brothers have both represented Ireland in major championships and World Cup events.

Ryan stated: “The ISAI are really good for getting funding from Sport Ireland. In some countries you only get €1,000 for costs, which is very little as equipment, accommodation, tournament expenses and other things need to be paid for. We do pay for things ourselves but luckily we have a great support system around us.”

The World Championships are taking place in four weeks time in Sofia, Bulgaria. Such is the demand placed upon him by his studies he will not be competing.

It is left to Seán to fly the flag when the Championships take place from Friday 8th to Sunday 10th March. Ryan is listed as an alternate athlete which means he will attend the three days of racing and may compete if athletes pull out.

He said: “Unfortunately I won’t be racing at the Worlds. Even though the event is three days long, I would need to take the week off college to prepare and train. I dream of becoming a doctor so in 10 years it will all be good.”

He owns a company alongside Seán in which the pair make fitness workouts for teams and individuals.

The pair established Elite Performance Training after creating an Instagram account showing their workouts in January 2015. Ryan and Seán are both certified personal trainers.

The certified personal trainer said: “It is tough to co-ordinate the fitness videos. We Facetime a lot but it is difficult with him being in Canada due to the time difference. We make it work though.”

His aims are to continue studying to become a doctor, grow Elite Performance training and most importantly inspire the next generation to consider speed skating for Ireland.

The 24 year old stated: “If I retired right now, what would happen to speed skating in Ireland? That is the problem. I want people of all ages to see us and consider taking the sport up.”

The path he has chosen is unique but he is hoping to forge a path for future generations to follow. Watch this space.