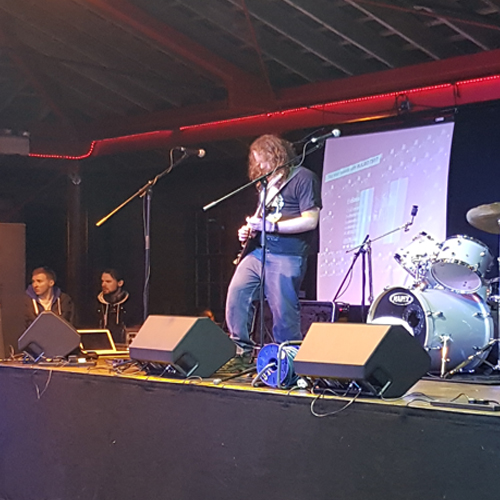 Four acts took to the stage to show their worth on Tuesday night at the annual UL Music Society’s Battle of the Bands in Stables.

Each act played a number of songs to impress the voters to get through to the final which will take place on Tuesday, Feb 28th.

The winner of the whole competition will open for All Tvvins in the Students’ Union Courtyard Thursday, March 2nd.

“It’s an event we have been running for the past six years,” said Donagh Sugrue, a committee member for the UL Music Society as well as MC on the night.

The first act to take the stage was, Oceann McCormack as an instrumental act with just himself, his guitar, and a pedalboard.

Oceann played such songs as, Prince’s Purple Rain and a fantastic almost heavy metal version of Bad Romance by Lady Gaga, which got the event off to a terrific start and set the tone perfectly for what was to come.

The next act to take the stage was Black Hole Cone, a new four-piece rock band from Limerick who made a great addition to the event as many of their songs were taken from TV shows with Margarine from Homer Simpson’s band Sadgasm in The Simpsons being the highlight of the act.

“We chose to do the event for exposure as we are a new band from Limerick and wanted to get our name out there,” the lead singer of the band said.

The third act to perform were Sovereign Slang another rock band who played some wonderful original songs such as ‘Mess of a Man’, ‘Streets’ and ‘Lake in the Sun.’

The fourth and final act to perform were the winners of the night, Cassavettes, who will proceed to the final in two weeks.

They played as an original band and their set list included the songs, ‘You Say,’ ‘Reunion,’ and ‘Voices Close.’

“Any opportunity is great and we want to support all events,” the band said when asked why they chose to play Battle of the Bands.

Heat Two of Battle of the Bands will take place in Stables at 8:30 pm next Tuesday, Feb 21st.

Thoughts You Have When Staying In