Time to dust off your dancing shoes! 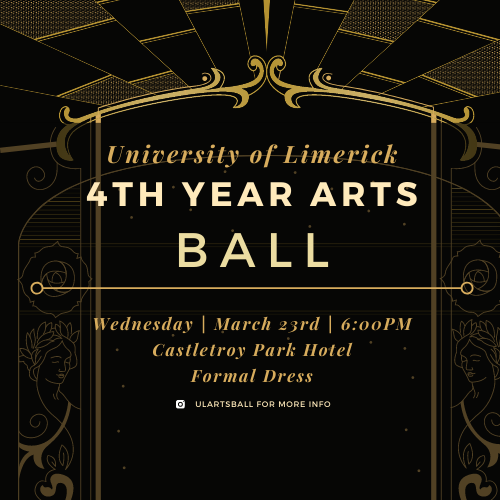 Two years of rules, regulations, and restrictions have come to an end, and as we return to a new normal, it not only brings back our cherished and missed annual events but also introduces some first-of-its-kind events that mark the end of an exhausting era.

Tickets can be purchased on Eventbrite for €45, which includes a cocktail reception upon arrival, followed by a 3-course meal served at 7.30 pm (which includes vegan and vegetarian options), all before dancing the night away to live entertainment from folk/pop duo FarHaven, and an after-party up until 2 am with DJ Paul Fitz. If that wasn’t enough, there is a Spotify playlist that has been made to encourage people to add their favourite songs so they can be played on the night.

The committee has also hired a professional photographer from Photobooth 365 for the ball so that attendees can capture special moments with friends and fellow students from the event.

The arts programme has one of the largest number of students in one course (300 in the 4th year group) and committee member, Jasmine Ryan, believes this is a major reason an arts ball has never been held before. The committee’s goal is to sell 200 tickets for the event in the hopes of promoting new friendships within the course before leaving college.

“When it comes to arts, we’re a really large programme and we’re kind of fragmented, in a sense, because there are usually so many people in your class that you don’t really get a chance to get to know them. So, I guess it has just never been done because the wonder has always been, “Could it be done?”

The dress code for the arts ball is formal, and not only has the committee gone above and beyond in their organising and planning, but they are also giving students a 10% discount at Suits You Menswear if you present a valid UL ID and proof of ticket, as part of a collaboration for the event.

They also have a pending agreement for a collaboration with Groody Carryout – stay tuned for further updates!

If you have already purchased your ticket and would like a chance to win a free €50 bar tab to use on the night, head over to the arts ball’s Instagram page and follow the steps in this post. Don’t forget to follow the account so you see all the updates regarding the event.

The arts ball committee also wants to acknowledge the support and encouragement they received from executive dean Shane Kilcommins and AHSS course director Chris McInerney and thank them for their part in helping this event come to life.

The event also welcomes students outside of the arts programme to come along.

“It’s a 4th-year arts ball, but if you have the desire to come along, or know a friend in arts, just hop on in.” Jasmine advised. “You guys deserve the night. I know that may sound really corny. But everyone deserves to have this one night. It’s falling in between the midterms for almost all of us, before the rest of the race days, and it’s before college ends. We have worked really hard. We deserve one night to just dress up, meet people, hang out with people they have known for a really long time, and just let loose.”