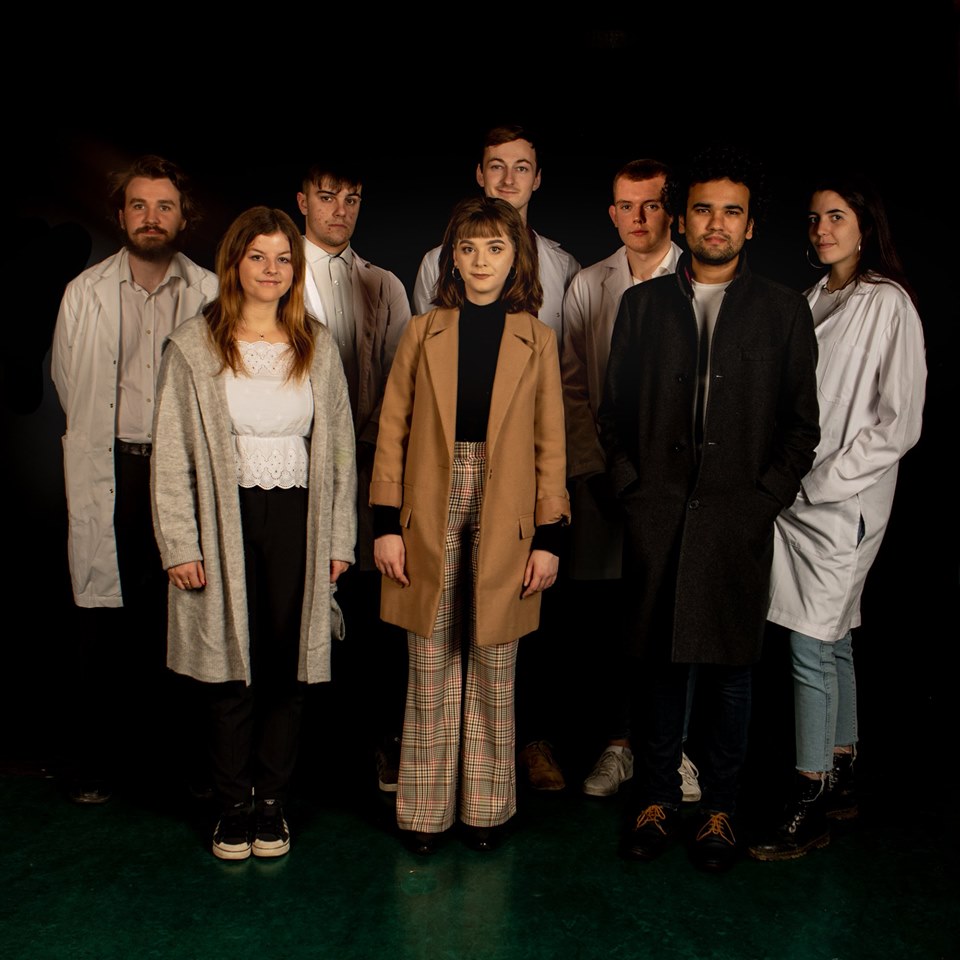 It takes a village to maintain a good theater program, as drama and the arts in schools are generally pushed aside in favor of sports.

For the UL Drama Society, this village is alive and active, which they demonstrated in their first production of the season, “Even Cats Talk.”

The performances took place on the evenings of October 22nd-24th, with a total of 140 audience members attending over the course of the show.

Under the direction of Paula Cooney, the students presented the story of a troubled girl named Sal (played by Keava Scanlon), who believed she was being detained in an insane asylum because she accidentally read some confidential government files.

The story, written by drama society member Kate Devaney, has the audience hooked from the beginning as they question Sal’s sanity right along with her.

Are the pills from the doctors really the cause of her hallucinations? Is her therapist (played by Conor “Cob” O’Brien) really a blood-sucking vampire? Is one of her doctors (played by Ollie Parry) really in love with her?

The answers to Sal’s questionable reality were layered in throughout the story, and in the end, it was revealed that her hallucinations were the result of a deep trauma that she experienced upon the death of her sister.

She even imagined her sister, Jodie (played by Sarah Devaney), as her “best friend” in the asylum.

The imagined “Jodie” later turned out to be only a stuffed cat that Sal had been talking to for comfort.

Although the story dealt with the weighty topic of mental illness, the cast handled it tastefully by keeping a healthy balance of drama and levity. Many of the actors showed their skills in versatility as they had to flip-flop between Sal’s imagined versions of their characters and who they actually were in reality.

Actors Muireann Hogan and Rushabh Mutha did a particularly good job with this, as they were initially introduced as quirky and bickering agents whom Sal had employed to help her escape.

Later, they turned out to be Sal’s grieving parents, and the drastic transition between characters was impressive.

Conor O’Brien’s performance also had an excellent display of this skill, as he entered the story as a red-cloaked vampire, and turned into a level-headed therapist as Sal started to see reality.

Keava Scanlon’s performance as Sal was emotionally charged and convincing; an outstanding choice for leading lady.

Sarah Devaney gave a sweet and endearing turn as Jodie, and Ollie Parry gave a memorable comedic twist to the show with his character, Dr. John Dunne.

Actors Paula Calvo, Paul O’Driscoll, and Matthew McKeon played the other three doctors in the asylum and did a good job of adding the element of creeping unease, leaving the audience to question whether they’re the “good guys” or the “bad guys.”

Despite a limited budget, the Drama Society managed a simple yet effective set design, producing the cold and lonely atmosphere of an actual insane asylum.

The lighting was cleverly used to create a distinction between Sal’s inner thoughts and the real world, and the intimate setting in the Jonathan Swift Theater made it so that even actors with quieter speaking voices could be heard from all areas of the room.

Even Cats Talk was a splendid example of the skill that the UL Drama Society has in its coffer, including a myriad of talented actors, scriptwriters, and stage crew alike.

They will be performing their next show, “Tales of the End”, in the last week of November.