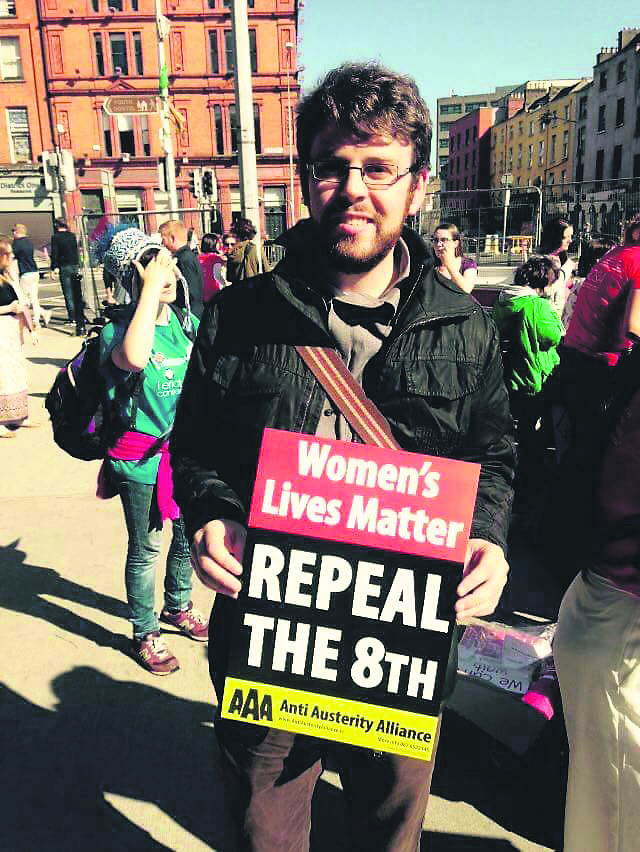 A Limerick City & County Council motion from Anti-Austerity Alliance Councillor, and former UL student, Cian Prendiville to support the complete repeal of the 8th Amendment from the constitution was defeated last week at a meeting of the Council.

In a statement Limerick Pro-Choice, ROSA (for Reproductive rights against Oppression, Sexism and Austerity), Mid-West Campaign for Choice and the Limerick Feminist Network said they were “very disappointed” the motion had failed to gain the support of the Council.

Limerick Pro-Choice Co-ordinator and ROSA activist, Aprille Scully said of the Council motion: “This is disappointing but expected – politicians are the most conservative force in society. True to form, they ignore the wants and needs of the majority (whom they claim to represent).

“Over 80% of the population want abortion legislated for in cases that require a repeal of the 8th amendment. No woman of childbearing age has had the chance to vote on the 8th amendment. Whether they like it or not, the repeal of the 8th Amendment will be a key issue in the general election. They need to come out of the Dark Ages and come join us in the 21st century.”

Mr. Prendiville, who proposed the motion and who has been selected to contest the next general election on behalf of the Anti-Austerity Alliance in Limerick city said: “This just shows how backwards and out of touch the political establishment are.

“They are happy to condemn thousands of women every year to travel abroad to access basic healthcare, and for those unable to travel – as was the case with Savita (who was too ill to travel) and Miss Y (who wasn’t allowed to leave the country) – the deaths and mistreatment of these women at the hands of the state will continue leave a shameful stain on the history of this country.”

Limerick Feminist Network founder and Limerick Pro-Choice volunteer, Yvonne Murphy added: “An estimated 12,000 people marched for Choice this past Saturday, it is blatantly obvious that this generation wants change and yet those in power continue to ignore us. What they need to realise is that we are not going away.

“This country has treated women appallingly in the past, with mother and baby homes, Magdalene laundries and symphysiotomy, and it is continuing to do so by not giving all citizens full bodily autonomy and a right to choose our own fate. We need access to free, safe and legal abortions in Ireland, before there are any further tragedies.”

A number of students’ unions around the country have taken positions in support of repeal of the 8th Amendment, including the Union of Students in Ireland.

However the University of Limerick Students’ Union has not taken a stance on the issue and does not have a any official pro-choice, pro-life or feminist society.