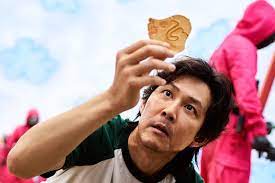 Since ‘Squid Game’ catapulted onto our Netflix accounts in September, it has become an online sensation, with meme worthy content and already a huge demand for a second season.

Now Netflix’s most watched show, Squid Game has blown the minds of its viewers with its violent and graphic concept. Its intense plot is centred around the events of impoverished people playing twisted versions of Korean children’s games to win a 45.6 billion Won cash prize (an equivalent of $38 million USD).

In this warped game, your elimination means sudden death. There is a survival show element, and it has been likened to a twisted version of ‘Takeshi’s Castle’.

This review has been personally targeted for those of you who have not yet had the chance to tune into this incredible series, with minimal spoilers (nothing that you haven’t seen in memes already) – so take this as your sign to start watching now. Plus, it’s spooky season so there is really no excuse to not freak yourself out and watch the goriest show on Netflix right now.

The main character is Seong Gi-hun, a divorcee that struggles to make ends meet financially, and gets by in life by exploiting his loved ones. 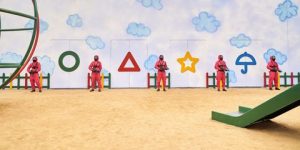 His financial and emotional challenges seem to go hand in hand thanks to his heavy gambling addiction. Ostracised by society and his family, his well-being hangs in the balance, and when dangerous loan sharks threaten to hurt him physically, Gi-hun reaches an all-time low.

It’s hard to feel bad for him, but it’s hard not to want a better life for him. So, when he is approached by a businessman who lures him into playing a game of ‘flip-card’ which results in Gi-hun walking away with a sizeable amount of Won, an aching face and a mysterious business card you can’t help but root for a happy outcome.

Being told he can make even more money just by playing games, Gi-hun feels he has no other choice as his mother needs treatment and he is at risk of losing his daughter.

Up until this point, we have seen Gi-hun gamble and lie to keep his demons at the door. We now see a more selfless side to him, as he risks it all to drag both himself and his family towards a better life.

In the first game of ‘Red Light, Green Light’ the penny drops that this isn’t just a regular game when the 456 players are at risk of being mercilessly shot if they cannot stand still in front of a large and creepy doll with a motion sensor. It’s almost like a game of Musical Chairs – except when you’re out, you’re REALLY out. 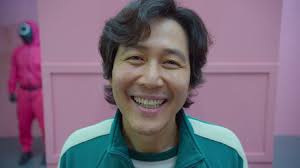 We follow Gi-hun and his adversaries as they fight their way through six vicious and ruthless games and come to realise that beneath the degenerate gambler exterior, Gi-hun is a kind and caring man who just got dealt a bad hand in life, like many of the other players – apart from a few who are just truly self-motivated and fuelled by fortune, which makes the show even more chaotic and entertaining.

‘Squid Game’ has received endless praise and acclaim for it’s one of a kind, albeit slightly traumatizing, plot and has certainly lived up to its hype.

The show ends with an abrupt cliff-hanger that leaves room for another season. While director Hwang Dong-hyuk has admitted to not having a clear plan for another season is it certainly not impossible, so feel free to get as attached as you like to the show, because we may be in for another gripping and grisly season.

Crystals- A Passing Trend or The Dawn of a New Religion?