Munster failed to end a decade of domestic suffering at the RDS. An Focal’s James Roulston Mooney reports. 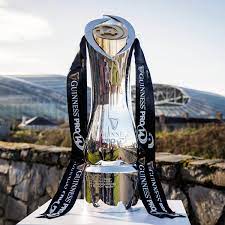 Leinster took home the Pro14 title for the fourth season in a row and eighth time overall after a commanding second-half display at the RDS.

The record champions started off the stronger side pushing Conor Murray into touch.

Their opening drive led to their first points when Ross Byrne opted to go for the posts.

The kicker added another three minutes later after Leinster failed to put the finishing touches on several plays.

Josh van der Flier and Ronan Kelleher stood out with their impressive work at the breakdown.

Munster got on the board after 13 minutes when their fly-half, Joey Carbery, converted his first kick of the evening, but Leinster kept control of the game.

Munster made a brief venture inside the opposition 22 but Leinster regained possession quickly and moved back towards Munster’s half.

The side was denied the first try by CJ Stander and Gavin Coombes after the pair held up Australian Scott Fardy.

Leinster full-back Hugo Keenan was sent through the Munster line by van der Flier and set inside centre Robbie Henshaw up for a run to the try line, but Chris Farrell took him down.

Conor Murray attempted a kick from beyond the halfway line after CJ Stander won the Red Army a penalty, but he failed to direct it between the posts.

Joey Carbery sliced a kick moments later after Leinster’s Jordan Larmour was judged to have been tackled but kept moving.

Carbery redeemed himself with a second attempt from behind the 40-metre line to level the scores at 6-6 for half-time.

Leinster got back on top at the start of the second half but were held up for the second time in the match before finally converting a try-scoring chance.

Jack Conan got the first try of the game and Ross Byrne added the extra two points to open a seven-point lead.

Peter O’Mahony was helped off the pitch after getting injured in the build-up to Leinster’s try and was replaced by Jack O’Donoghue.

Multiple changes in the front row saw both sides welcome back international stars for the last 30 minutes.

Ross Byrne failed to extend the gap to 10 points at the first time of asking when play was called back for a collapsed scrum.

Flanker Rhys Ruddock had Munster on the back foot with an impressive carry, but Munster’s breakthrough star Gavin Coombes brought an end to it with a jackal turnover.

A Jean Kleyn knock-on brought an end to a period of Munster possession.

Sexton was brought off for a head injury assessment (HIA) which saw Ross Byrne return to the field.

Sexton did not return.

Jack Conan made the most of a messy Munster box-kick and made metres that led to Ross Byrne getting a second chance to stretch the lead to 10 points, which he took.

Craig Casey, Billy Holland and JJ Hanrahan came on in place of Murray, Carbery and Kleyn while James Tracy replaced Ronan Kelleher for the final 10 minutes.

Munster was pegged into their half for the majority of the final moments with their attempts to escape being in vain.

Leinster earned a fourth Pro14 victory in a row after their second-half display took them beyond Munster on the day.

It was not their day as they were unable to convert their first-half chances and were kept at bay for the following 40 minutes.

The two provinces now look towards the Pro14 Rainbow Cup next month and the European ties they have scheduled.