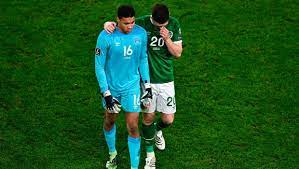 The Republic of Ireland lost 1-0 to Luxembourg yesterday evening after a torrid display that summed up Stephen Kenny’s reign thus far.

Ireland suffered a sixth defeat in 10 under Stephen Kenny with Gerson Rodrigues’ 85th-minute strike proving to be the thorn in the team’s side.

Kenny’s men were wasteful in front of the goal, failing to convert several chances in the first half and finish with 1.68 expected goals on the night but none to celebrate.

The combination of Enda Stevens and Callum Robinson on the left-hand side of the field looked dangerous once again at the beginning of the match but proved to be inefficient as time went on.

The midfield of Alan Browne, Jason Knight and Josh Cullen was lively for the first quarter too, offering passing options and making space for others.

The side conjured up their best chance 17 minutes into the game when both the midfield and the left-sided players worked together to lay it on a plate for Luton’s James Collins who couldn’t find a way past Luxembourg’s goalkeeper Moris.

After this chance, it began to feel like the side were not going to score as possession grew and grew but the quality of chances waned.

Luxembourg offered signs of dangers that were interspersed between Ireland’s time on the ball with midfielder Vincent Thill and Dynamo Kyiv star Gerson Rodrigues looking to test 19-year-old debutant Gavin Bazunu and his defence.

The half ended without a goal and anxiety grew as the second drew closer.

Wing-back Matt Doherty was replaced by Robbie Brady after pulling his hamstring earlier on in the game.

Luxembourg added more to their game in the second half with Vincent Thill giving the defenders more problems.

James McClean came on in place of Newcastle’s Ciaran Clark in an attempt to relight the attacking flame that had gone out.

A few chances were created but not taken and Luxembourg continued to look the more likely of the two sides to score.

A James Collins bicycle kick went astray and a Robbie Brady cross failed to find a green shirt, making a goal feel beyond the boys in green.

Four additional minutes were granted but Ireland failed to take advantage of them, creating no chances of note bar a late Shane Long attempt that was saved.

Kenny’s men slumped to 10 without a win under him and 11 as a team with the already slim chances of World Cup qualification looking non-existent.

Luxembourg can take in their performance as they were the better side overall but it is worrying for the nation that a side with some Premier League players in it was outplayed by the 98th ranked national side in the world.

It may leave the FAI at a crossroads on what to secure a positive future for the future of Irish football.

Qatar is up next for the Republic of Ireland and, with the rank of 58th best side in the world, they may be a handful for a national team that seems to be in freefall.