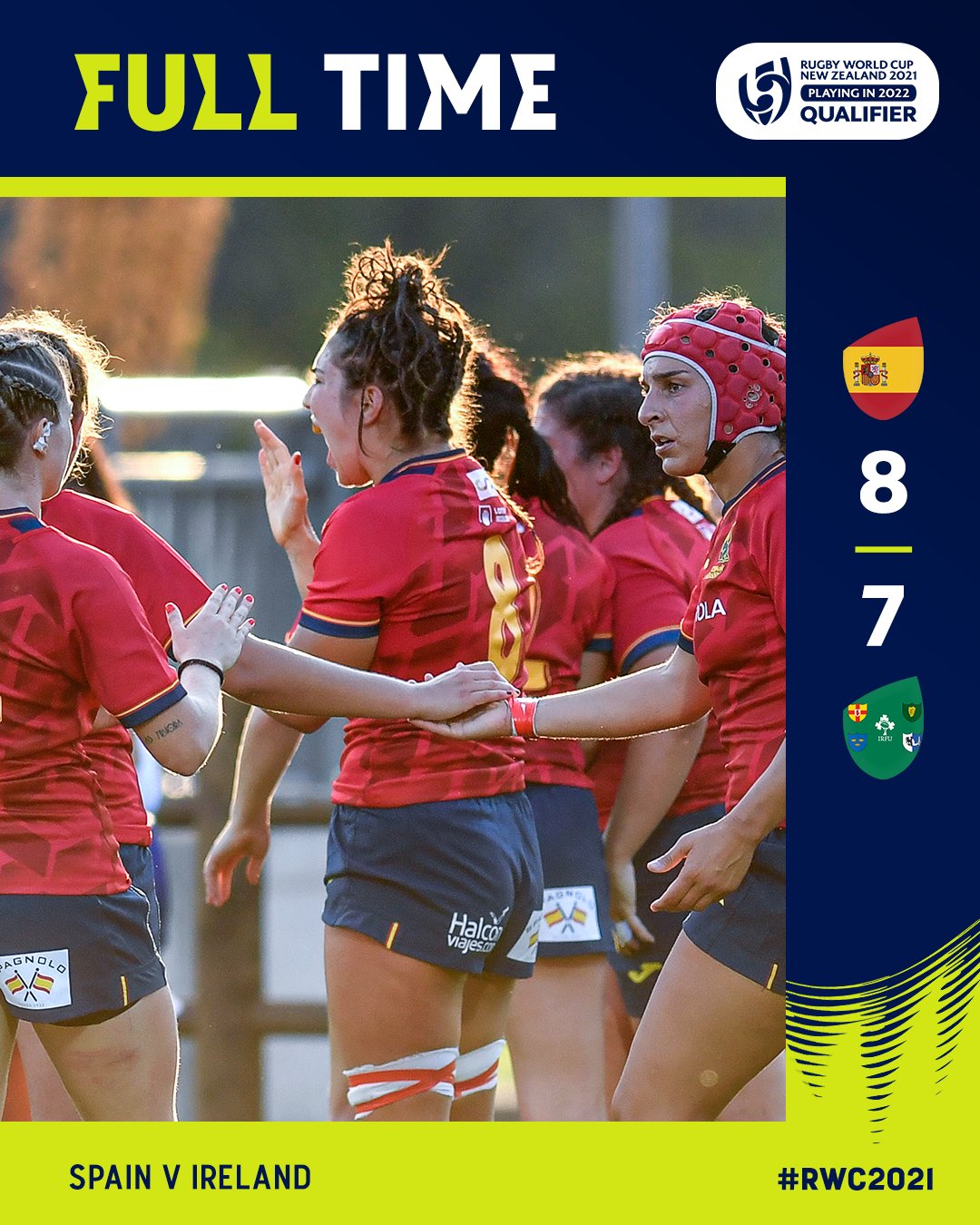 Ireland suffered a one-point defeat to a physically imposing Spain side in what was a poor start to their Rugby World Cup 2021 Europe Qualifier campaign on Monday evening.

Adam Griggs’ side made textbook errors throughout the match as the Women’s Six Nations side failed to assert their dominance over the 2019-20 Women’s Rugby Europe champions.

Spain threatened with their attacks from the opening minutes and their hard work paid off late in the game when replacement back Eva Aguirre dived over the line in the 71st minute to put her side back in the lead with less than ten minutes to go.

A missed conversion left the door open for Ireland to steal the game from the clutches of Jose Antonio Barrio’s squad but Enya Breen’s last-minute penalty fell short and their fate was sealed.

Spain started as they meant to go on with a dominant pack evident in their first set-piece opportunity.

Exeter Chiefs scrum-half Patricia Garcia’s penalty as a result of the Spanish pack’s physicality hit the post and it looked as if Ireland had got off the hook but Garcia made up for her error minutes later.

The ball was passed out wide after ground was made up in the middle and Flood found Beibhinn Parsons on the wing, who rounded her marker and crossed the line for the first try of the game.

Flood converted and more conversion opportunities were expected to come her way on the night after the response Ireland had given to Spain.

Yet, that was not the case as Spain showcased a resilient defence and Ireland made several unforced errors throughout the game to deny themselves some great attacking opportunities in the Spanish 22.

Parsons came close to adding a second several minutes after her score but both sides began to grow sloppy and the half devolved in a trading of penalties.

Spanish centre Amalia Argudo saw yellow as Ireland pushed for a try but Griggs’ side were denied a second score when prop Cliodhna Moloney was held up on the line.

Ireland went in at the half in the lead and came out in the second half with attacking intent – Amee-Leigh Murphy Crowe dotted over the line but it was ruled out due to a knock-on by Ulster number nine Kathryn Dane in the build-up.

Ireland started to lose possession at an alarming rate, either through being dispossessed by Spain or errors of their own doing.

Spain began to start threatening the Ireland defensive line in the final 20 minutes of the game and the Irish mistakes only served to aid their cause for a winning score.

Barrio’s team got the score they wanted with nine minutes to spare when Aguirre crossed the line after several errors from the girls in green.

Previous to the score, substitute and debutant Sam Monaghan was binned for 10 minutes but Spain initially could not make the extra woman count.

However, the resulting Ireland lineout throw was not straight and Spain retained possession, formed a strong maul that broke into the Irish 22, played the ball out wide and took the lead.

Garcia missed her conversion but Ireland could not capitalise on the opportunity that was presented to them as Ul Bohemians star Breen could not get the distance on her kick.

It is Spain’s first win against Ireland since a Women’s Six Nations meeting in 2005 and the 8-7 loss puts Ireland’s qualification hopes in jeopardy, with an attacking Italian side now foaming at the mouth ahead of Sunday’s fixture, ready to further their claim for the European qualifier spot for the World Cup in New Zealand.