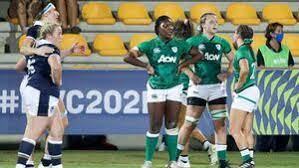 Anyone that watched the Irish women’s rugby game against Scotland will have seen distraught players thrown across the pitch after their defeat. This was, without a doubt, grim viewing for the onlooking audience.

Following this fall out in the World cup qualifier on Saturday, September 25th, many questions have been raised about the treatment of Women’s rugby in the country.

This loss means the Irish team will not feature at the World cup for the first time since 1991.  Although Irish women’s rugby has been in decline since 2015, this feels like an all-time low.

In 2017 Ireland hosted the Women’s World cup ending up in an eight-place finish meaning they missed out on a qualification for the next tournament.

The IRFU carried out a review into that failed campaign, but the report was not made public which lead to the committee setting some extremely difficult goals for the following year through to 2023.

These goals for the women’s teams included Rugby World cup qualification in 2021 with a top 6 finish, One six nations title or top three finish otherwise and qualifications for 2020 Olympic sevens. From reading this list it is obvious that there has been a huge failure in terms of meeting these goals.

The plan itself does not list any detail of how these goals could be achieved. During 2018 the IRFU also stated its aim to have 20% of its committee members and management rolls occupied by women.

The appointments of Fiona Steed and Yvonne Comer to the IRFU committee were a positive step forward but there is no doubt more female influence is need at the very top of the IRFU.

The failure to qualify for the world cup in 2022 is a serious situation that the IRFU find themselves in, but it must equal a turning point in the sport.

“The IRFU, no more than the players and team management – as was evident from the reaction at the end of the game against Scotland – are extremely disappointed that our women’s team objective of qualifying for the Rugby World Cup has not been achieved,” reads an IRFU statement from Monday 27th.

The question still remains as to why our ladies teams cannot qualify for these important tournaments. Well it may be down to the massive jump female players face from Under 18 to senior level.

This issue has even lead to the Independent Rugby Academy Ireland setting up an Under 20 initiative last year without support of the IRFU. There is also a lack of ownership when it comes to the Women’s All-Ireland League (AIL).

At the moment, there is a huge gap between most of the AIL clubs and IRFU with the majority of clubs basically running the league on their own. How are women expected to make the massive jump from underage to senior rugby when there is no clear pathway in place.

This issue is amplified by the men’s side of the sport, with clear stepping stones and guided ways of making all the way up to a senior or international panel. It is an old-age saying we are told that male players will not be ready for test rugby until they have been exposed to Champions cup or what is now known as the URC, but where are female players getting the same experience?

It is evidently clear from stories and social media that women’s rugby is not taken seriously enough in Ireland. It would be an injustice not to mention a couple of examples from recent months which have summed up the situation of the sport here.

During September, Connacht women’s’ rugby team had to change beside rat infested bins before their women’s inter-pro match against Ulster, which they were then told not to speak about after the game. This has never happened to any male provisional team, ever.

Another example came from former international rugby player Anna Caplice, who voiced her disbelieve and outrage at the reaction of Linda Djougang’s try on Saturday last. Anna compared the reaction to a try scored by a male at the rugby world 7’s tournament with comments appearing like “ An absolute unit”.

The comments under Linda’s try video cam in the form of utter disrespect and abuse “When they can’t tackle” and “Embarrassing defence”. Not one of these comments mentioned what a great score it was from the Irish prop. Anna finished this twitter thread with this comment “Stop telling me women’s rugby isn’t good enough when your eyes can only see the negatives…. I’m sick of it”.

These are only two examples out of countless others in regards to social media and complete lack of respect shown towards women’s rugby as an entire sport.

The only way for the sport to move forward is start bridging these gaps left by the IRFU. There has to be a connection between the higher powers and clubs, so girls can see a clear pathway for them to step into.

Reports also undertaken by the IRFU have to be made public so people can what needs to be done, but most of all there has to be a consist set of games in all age groups where females, like their male counterparts, are able to practice their basic skills every single week. Without this, there is no point in continuing as the standard will never rise to the level it should be at.

There has to be a serious turn around in the sport and now is the time.