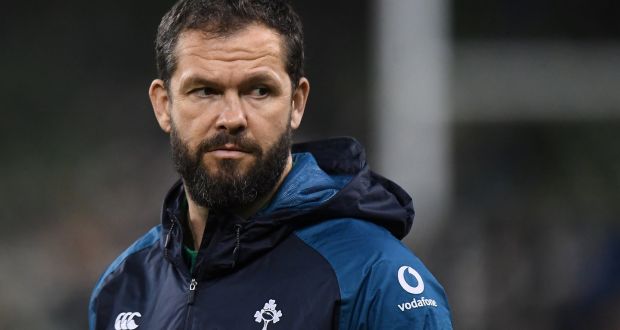 The Ireland side named to face Japan on Saturday could hardly be described as experimental. While other sides have clearly got one eye on the 2023 World Cup, Ireland coach Andy Farrell has opted for experience. It is easy to forget that Farrell was under severe pressure prior to the away win over Scotland in the 2021 Six Nations and, especially, the brilliant win over England in the final game of that tournament. He is probably safe in his role now until the World Cup, but a couple of poor performances and he may be under pressure again.

That said, when one looks at the teams the likes of England and France have named then one wonders is this not a missed opportunity for Ireland. France have been building towards the World Cup since the last tournament and they are now in the process of building a new squad. England boss Eddie Jones already has his eyes fixed on France 2023.

He has left the likes of established stars such as Mako and Billy Vunipola, Jamie George, and George Ford out of his squad for the Autumn Internationals when they will play Tonga, Australia, and South Africa. Speaking at the announcement of his squad for these games, Jones said the door is not shut on these players for the World Cup but that he feels the squad is one that can: “grow, develop and be World Cup champions.” It is an approach that might cost results in the short-term, but he is looking at the bigger picture.

He now feels he has identified a change in how the game is being played. He was the first coach to identify the value in using the kicking game to break down teams and it put Ireland to the sword in the 2019 Six Nations and got England to the World Cup final that same year, so his analysis is worth taking note of.

He has picked an exciting squad with the likes of Marcus Smith in it. A playmaking out-half who can mesmerise with ball in hand. It will be fascinating to see how England fare with this new approach.

As for Ireland, it is difficult to get away from the sense that this squad has largely been picked on reputation rather than form. There are several experienced players in the squad who have had little to no game time this season but are still in. The likes of Connacht’s Jack Carty is certainly one of the form players in Ireland at the moment but it still feels like he is paying the price for that defeat to Japan in the 2019 World Cup.

Joey Carberry still does not look back to himself following his horrible run of injuries. His Munster rival Ben Healy should surely be in the Ireland squad on form ahead of him and Harry Byrne. Johnny Sexton is still Ireland’s best out-half but the fact that there is no clear second choice two years out from a World Cup is deeply concerning. Sexton will win his 100th cap on Saturday but is 36 now and will be 38 come the World Cup so being so reliant on him is not a good situation to be in.

At scrum-half, Farrell is continuing with Jamison Gibson Park. If one were picking Ireland’s scrum-half on form, arguably none of Gibson-Park, Conor Murray, or Craig Casey would even be in the squad. Nathan Doak has been in fantastic form for Ulster. He is only 19 but we have seen how France benefitted from bringing players in at that age and integrating them into the side. Kieron Marmion and Luke McGrath have also been in fantastic form.

The team named to play Japan on Saturday is equally conservative. The likes of Ryan Baird, Gavin Coombes, Robert Baloucoune could all have been thrown in from the start and tested against good opponents. This will likely be the same side that will face New Zealand in two weeks. So, the likes of Coombes will probably have to wait for the Argentina game on November 21st. It certainly feels like this weekend has been a wasted opportunity to build up some squad depth ahead of the World Cup.