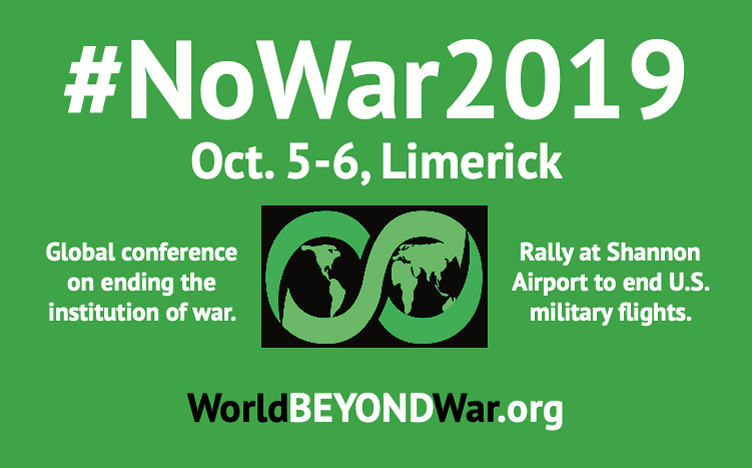 A conference called ‘NoWar2019 Pathways to Peace’ is planned for this weekend, Saturday and Sunday October 5th and 6th at South Court Hotel in Limerick.

The conference portion of the event starts at 9am on Saturday morning.

The conference will be followed by a rally near Shannon Airport on October 6th to demand an end to the airport’s use by the U.S. military.

Critics argue that the American usage of Shannon Airport is a violation of Irish neutrality, and  Edward Horgan, a part-time lecturer at UL and a vocal member of Shannonwatch, has lamented the US’ dealings at the airport.

“We fully support the restoration of Shannon as a genuine civilian airport and are convinced that the reputation and future of the airport has, and is being seriously damaged by US Military and CIA misuse of the airport” claims Mr Horgan.

“The emergency at Shannon involving a fire on an OMNI Air plane carrying armed US troops is an indication of a possible worsened disaster waiting to happen.”

Among the people taking part in the conference including MEP Clare Daly, Nobel Peace Laureate, Mairead (Corrigan) Maguire, Presenter, of RTÉ Global Affairs series “What in the World?” Peadar King, Chairperson and founder of Veterans For Peace Ireland and part-time UL Lecturer Ed Horgan, and Co-Founder of World BEYOND War, the organisation behind the conference, David Swanson.

The conference will include panel discussions on such topics as nonviolent activism, Irish neutrality, sanctions and refugees, closing bases, and outlawing the arms trade, as well as participatory workshops on divestment from weapons, youth activism, art creation, and using music to build the movement.