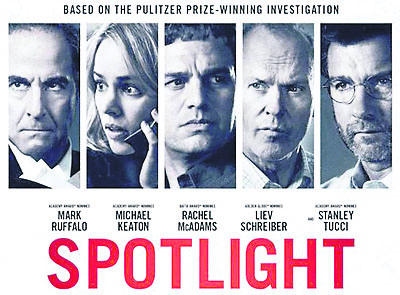 ‘All the President’s Men’, ‘Veronica Guerin’, ‘Spotlight’. These movies span both sides of the Atlantic but what both have in common is the stark depiction of the value of investigative journalism.

While ‘All the President’s Men’ depicts the series of events leading to the downfall of a US president and ‘Veronica Guerin’ brings to life the work of martyred Irish investigative journalist, Veronica Guerin, in the area of Dublin drug gangs in the 1990s, ‘Spotlight’ looks at the team of journalists who shone a light on the abuse of children by Catholic priests, and the subsequent cover ups, in Boston over the space of decades.

The movie centres around the Spotlight team at the Boston Globe in 2001, as they investigate both the abuse of children by priests from the 1970s in the Boston diocese, and the cover up by those in charge of the priests.

As an Irish person in my early 20s, it’s not difficult to recognise the stories being brought up in the movie. From abusive priests being moved from parish to parish, and country to country, to the attempts by the Church hierarchy to shut the stories down, these are all familiar to us from decades of almost identical stories in an Irish context.

However the movie doesn’t place sole focus on the heart of the story of child abuse itself. It looks further and to the dilemmas faced by journalists globally, especially those in the investigative field.

Spotlight looks at the ethical issues of writing so publicly about someone’s painful and traumatic abuse story. It depicts the dilemma journalists still face to this day of when to print a story and where a line can be drawn between the need to warn people of potential danger and the duty to gather all information first.

The first issue was brought up on several occasions throughout the 2 and a half hours, with some on the team running to publish the information they had and being held off until the story was fully complete.

Another harrowing scene, addressing the second issue raised by Spotlight, involved one of the journalists discovering one of the abusive priests had been living near his home. Concerned that the community did not know the information and had a right to know, the journalist appeared to struggle with keeping the information to himself until it came to publish the full story.

These two issues, faced by many real-life journalists, are depicted perfectly in Spotlight. Adding to this is the overall emphasis carried in the movie on the impact a story can have on a journalist’s personal life. Journalists are not removed from their work, no matter how hard they may try to be. When they go home at night, they still think about the story they are working on.

One character, depicted by Rachel McAdams, struggled with how she would tell her devoutly Catholic grandmother about the story she was working on when it was published. Another, Mark Ruffalo’s character, became so involved in the story he was researching, he broke down entirely in one of the later scenes.

As with ‘All the President’s Men’, Spotlight’s investigation was ignited by the smallest pieces of information and while first only looking into the knowledge of one Archbishop of the abusive history of one priest in Boston, the team discovered a series of abuse cases and cover-ups.

‘Spotlight’ was a refreshing display in a new age of journalism where fact-checking is now no longer held the highest regard. News now must be quick and can be based on rumours or speculation. The new goal is to get the website hits first, before any other publication, whether the information is factual, fairly presented or entirely accurate or not.

The Spotlight team, in clear contradiction, took the hours, days, weeks and months to slowly and meticulously gather all the information and extract and verify the truth before publishing their expose.

Having now been awarded Best Picture and Best Original Screenplay at this year’s Academy Awards (Oscars), ‘Spotlight’ has earned its place as one of the greatest investigative journalism movies of our age. A well-deserved success that will now stand alongside ‘All the President’s Men’ and ‘Veronica Guerin’ as examples of quality journalism. It will also stand as a beacon and example of professional journalism for new and young journalists globally.