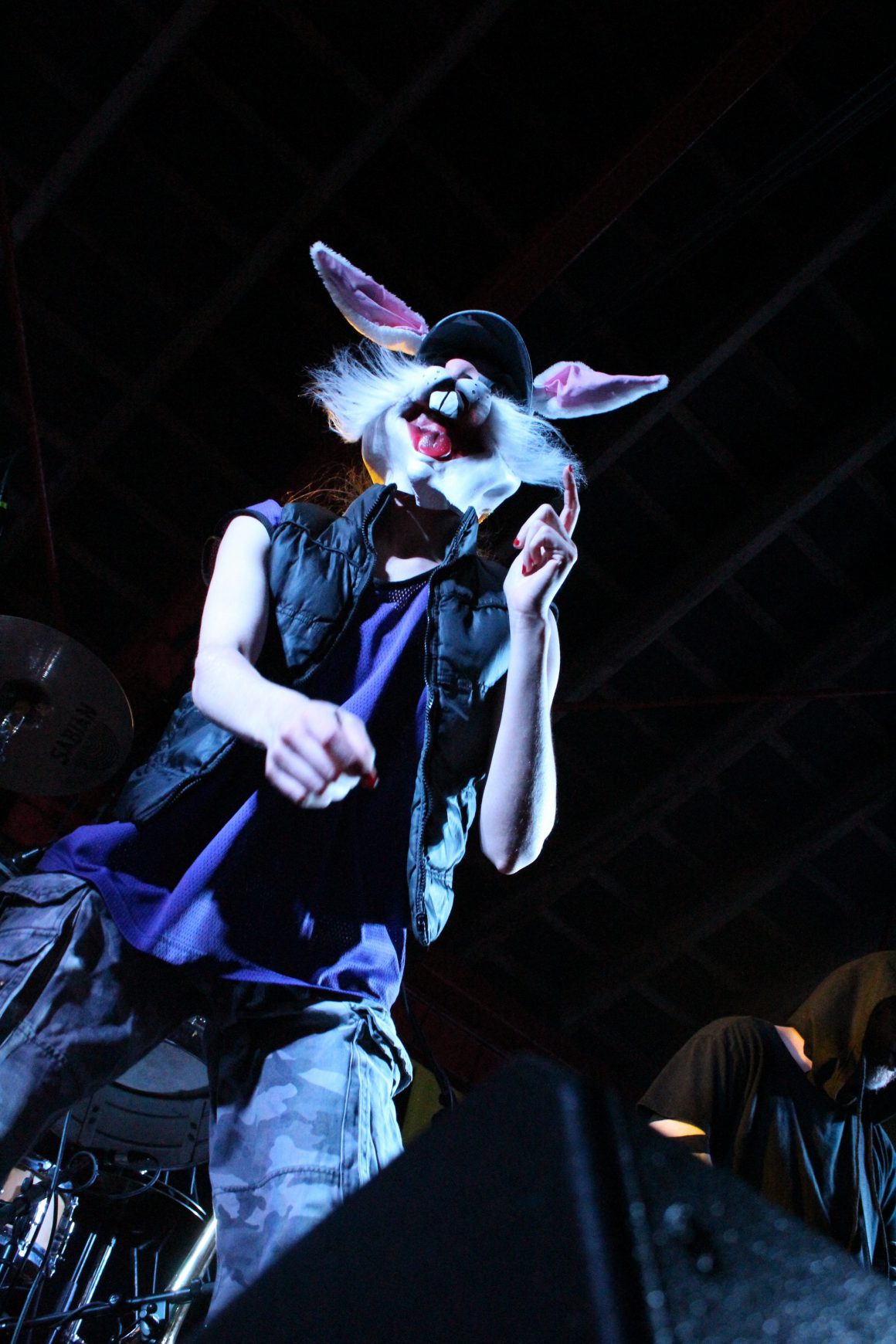 UL’s Music Society organised for the Irish dance band, King Kong Company, to perform Thursday night at the Stables as part of Music Week. The atmosphere was electric with alternative dance moves to be seen from all angles of the floor.

The Waterford based group kicked off the gig by entering the stage dressed in gorilla masks with a mesmerising display of lights instantly drawing the crowd from the bar to the stage. It was not long before they broke out their controversial line, “If ya have it, now’s the time to take it,” driving the small but loud crowd wild.

As the night went on, the crowd grew, the songs got heavier, “Box Head” appeared then disappeared and the vibrations of the bass could be felt throughout your body. It was as though UL had been transported into a 90’s rave.

Chants of “one more tune” rang out as the lights went down and the band left the stage. To the crowds delight, King Kong Company returned and the atmosphere was incredible once more.

The group described the type of music they play as “dirty, dubby, electric rock and reggae, crossing a lot of genres.” This was evident throughout the night as each of their songs contained many aspects of a reggae/dance fusion. When asked about their preference for intimate gigs such as the one being held in UL or festivals, Electric Picnic for example, the band answered with, “It depends on the gig, it’s the crowd that makes a good gig whether it be big or small.”

Playing to a crowd of students, King Kong Company explained how the ages of their listener-ship began higher, towards the mid 20s or 30s with it expanding to younger age groups as of late. Part of the appeal factor for a younger audience is the group’s lyrics. The inspiration for their lyrics comes from “Everywhere and anywhere, some are rants, things we experience and hear, real life and ultimately telling a story.”

“We were on top of Shaggy,” said the band when asked about their recent success in the Irish Charts following the release of their debut self-titled album, (June 2016). “It was a surprise, our album got to number one in the Irish Reggae chart.”

Having gotten to number six on the Irish Indie Chart, King Kong Company humbly explained, “More so than any charting or sales, it’s really nice to be able to put your hand on something that we made amongst friends and to be able to say we’re proud of it.”

When asked to comment on their latest single, “Donkey Jaw,” (September 2016) King Kong Company said they were very excited. “It gets such a good reaction at gigs, having people singing words back at you is very satisfying. It is suited to festival crowds as that’s the story it tells. Often the people who enjoy it the most are those at the front of festivals shouting their heads off.”

Despite being the group’s least radio friendly track, they believe it was an interesting decision based on their fans reaction to release the song as a single. “It was the one the people who liked the band reacted to the most.”

“The one with the wild pig,” and playing the main stage of “Body and Soul” were two of King Kong Company’s most memorable gigs. The group are playing Cork Opera House, The Guinness Jazz Festival and Sligo Music Festival over the course of the next few weeks. They hope to play more gigs in Europe and a limited number in Ireland over the coming year. King Kong Company have recently signed a record deal with a label in Belgium and are looking forward to the future. 2017 will be 50 percent focus on live shows and 50 percent focus on new material for the band.

King Kong Company finished on the note, “We know it won’t last and there will come a time when we won’t be able to do this so we try to enjoy every gig because it’s a very enjoyable thing to do.”