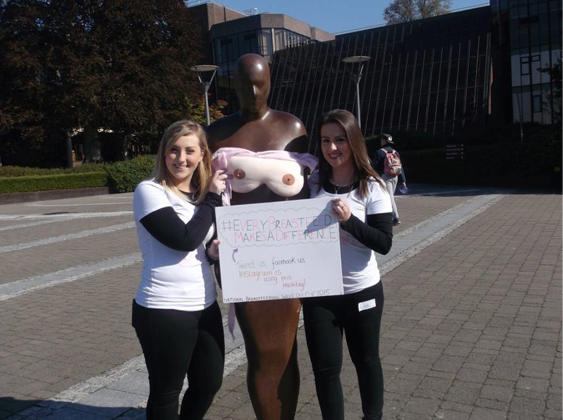 National Breastfeeding Week took place from the 1st to the 7th October this year, and the students of midwifery were hard at work on campus to raise awareness for it, with the event also coinciding with UL’s Health Awareness Week.

Staff and students were invited to a fun-filled event in the hub, which was held on the 1st October. Final year midwifery students offered displays of interesting activities and material regarding breastfeeding, and encouraged all guests to participate in various activities, such as a ‘Truth or Myth’ board, ‘The Breast Test’, and a game of ‘Pin the Baby on the Boob’.

These activities were enjoyed by all who attended. Many participants had their photos taken and were provided with free goodies, including sweets and cupcakes in the shape of breasts.

The students hoped that their presence on campus would not only help promote National Breastfeeding Week, but that it would also educate people on the importance and advantages of breastfeeding.

The event also attempted to put a stop to the negative views of breastfeeding, by correcting the common misconceptions regarding the issue, and they provided information on the topic which helped to break the stigma which breastfeeding mothers experience.

They also outlined any of the risks involved in breastfeeding, and offered leaflets which listed all of the health implications involved in the matter.

Visitors took part in surveys which raised questions about individual opinions of breastfeeding, with their participation contributing to a further study of the subject. The midwifery students were also present to answer any questions from the guests, and contributed in helping to solve any concerns that the staff and students may have had involving the topic.

The event received a great response from both staff and students of UL, who learned more about the issue and had fun while doing so.

As a follow up to the interesting activities held in the hub, the students invited local breastfeeding mothers and healthcare professionals into the university on October 6th. The students hoped to learn from the experiences of these women, and apply what they have learned to their studies of breastfeeding.

The events received a positive response from all involved, and the midwifery students were successful with the awareness that they raised, informing partakers of vital information and the essential facts regarding breastfeeding.

UL counselling waiting list to clear up to Christmas