No Strangers To UL 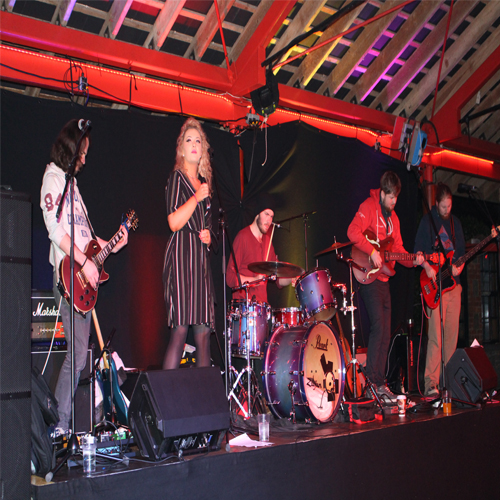 No Strangers To UL

The UL Music Society hosted their first gig of the semester with The Stranger Phases on Tuesday night.

It’s fair to say that their weekly Tuesday night gig went off like a house on fire and has certainly set the bar high for acts that are set to perform on the UL stage in the coming weeks.

Originally hailing from County Waterford, The Stranger Phases is a five piece band with the lead guitarist, Andy Buck, studying here in UL.

From the get go, there were good vibes floating around the place as the lads got set up and ready for the night.

They made a real effort to chat and interact with the audience before, during and after the gig which left a really positive impression.

Expectations, once the gig began, were definitely high.

Not surprisingly, those expectations were beyond exceeded as the band rocked the gig from start to finish belting out all-time classics such as “Galway Girl”, “Little Lion Man”, and “Sex On Fire”.

This was all alongside their own material from their new E.P. Life. Never. Peace., a teaser for their upcoming album Now Or Never.

When chatting to the lads after the gig they said that the inspiration for their new album title came from the fact that they quite literally felt that it was “now or never” for their music as they felt that it was the right time to really plunge into it.

Well, I think it’s safe to say that the crowd at the Stables on Tuesday are certainly glad of this, and old and new fans alike are certainly looking forward to the release of the album.

Their EP is available on Spotify, Bandcamp and iTunes. Nevermore and Life Is For The Living are also available on YouTube accompanied with music videos.

Looking forward to having ye back again lads, we had a blast!

Limerick Stands Up Against Mental Illness