Manchester United get back to winning ways, Cian Dalton reports. 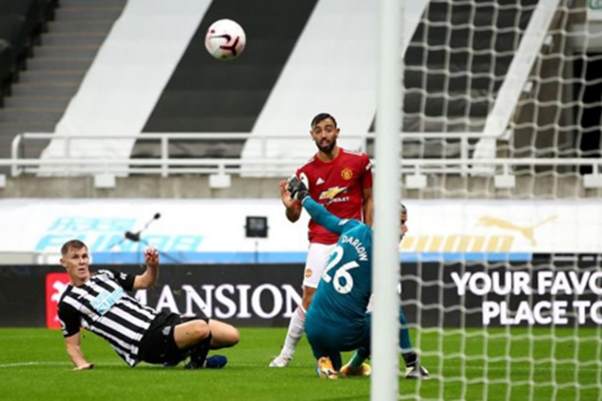 Manchester United put four past Newcastle United in St. James’ Park on Saturday night. However,  the scoreboard might have flattered the Red Devils.

It looked like it was going to be another one of those nights for Ole Gunnar Solsjkaer and his underperforming troops when Luke Shaw diverted a Newcastle cross into his own net.

David De Gea looked on helplessly as the ball sailed past him at the near post in the third minute. Manchester United settled into the game following this setback.

They thought they had drawn level through a Bruno Fernandes stunner into the top corner but VAR reared its sensible head again and ruled it out for an offside in the lead up to the goal.

Under-fire captain, Harry Maguire gained some redemption by heading the ball into the net and drew the teams level.

The second half continued in the same vein as the first. Manchester United held much of the possession.

Like the opening three games of the season, they could not find an opening in the opposition’s defence.

Bruno Fernandes, to the delight of opposition fans all over the world,  missed a penalty in the 58th minute.

Marcus Rashford went down on the edge of the box after an inconspicuous challenge from Jamal Lewis that needed an assist from VAR to be awarded.

It looked like it was going to be another frustrating night for Manchester going into the final ten minutes.

Rashford, who looked livelier than previous outings in the league this season,  ran at the Newcastle defence.

Just when it looked like he was about to take too much out of the ball yet again, he put Fernandes through one on one with Karl Darlow in the Newcastle net.

Fernandes curled the ball into the top right corner yet again and this time he was in  VAR’s good books.

Four minutes later, Aaron Wan-Bissaka, on his 50th appearance for the club, smashed the ball into the same corner after Rashford again provided the assist, his first for the club.

Not long after Marcus Rashford MBE bagged his second of the season and United’s fourth.

Despite the impressive scoreline, it was still a frustrating 85 minutes for Solskjaer’s men.

Apart from Rashford throughout the game and Shaw in the second half, there didn’t seem to be much urgency on the ball, unless they were losing possession.

Fernandes’ runup to the penalty didn’t look convincing and until his goal, in the 86th minute, it looked destined to finish in a stalemate.

United seemed to run out of suggestions when it came to scoring in open play and not from a dead ball.

In saying all this, Newcastle never really looked like scoring after the own goal.

Dan James resorted to running into Saint-Maximin to stop him rinsing his teammates any further.

Solskjaer will be happy with his side’s performance overall. They did dominate the match across the board.

He will be delighted that they did not leave the result behind them as usual and put away three brilliant strikes to seal the three points.

This was a match that he and the team needed to win following their drubbing against Spurs before the international break.

In the end, it was a positive night for some big names in English football.

Maguire may well have put some demons away after scoring an impressive goal and commanding the backline for 90 minutes.

Wan-Bissaka scored his first goal for Manchester United and may have given Gareth Southgate something to think about before the next Nations League games.

As for Solskjaer, he will just be focused on PSG in the Champions League on Tuesday.

That will be a much tougher task.