Brian Ortega and The Korean Zombie went head-to-head for a title fight spot on Saturday night. 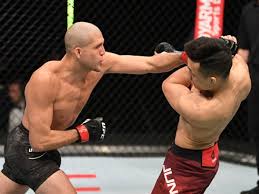 Brian Ortega (15-1 1NC) put on a dominant display against ‘The Korean Zombie’ Chan Sung Jung (16-6) in his return to the octagon.

‘T-City’ made all the right moves, including a dazzling spinning elbow in round two, in his first fight in 22 months, earning the unanimous decision (UD). The fight was scored 50-45 by all three judges.

The main event began with a slow and methodical first round occurring before some of the more exciting exchanges later in the fight.

‘TKZ’ hesitated regularly when getting within range of Ortega and was met with some heavy counters whenever he committed.

He managed to land some heavy blows to keep himself in contention every round and dominated the first half of round four but could not keep the pressure up long enough to impose himself.

Ortega will be lined up as the next contender for Alexander Volkanovski and his featherweight belt, a fight sure to bring the fireworks.

Jessica Andrade (21-8) became the first woman in UFC history to win in three different divisions (Bantamweight, Strawweight, Flyweight) after her victorious debut at 125lbs against number one contender Kaitlyn Chookagian (14-4).

A strong opening round culminated in a late TKO courtesy of a powerful strike to Chookagian’s mid-section.

The strong statement sent out by Andrade will be noticed by champion Valentina Shevchenko who will be eager to see a new face at the top of the flyweight rankings.

Jimmy Crute (7-1) dispatched of Modestas Bukauskas (11-3) in the first round of their light heavyweight clash.

His TKO win against ‘The Baltic Gladiator’ earned him the other performance of the night bonus awarded and more eyes on him as he moves up the light heavyweight division.

Guram Kutateladze (12-2) refused to admit victory after his split decision victory in the fight of the night against the previously undefeated former KSW featherweight and lightweight champion Mateusz Gamrot (17-1 1NC) in the latter’s UFC debut, dubbing it “no.1 bulls***” live on-air.

The other fights on the card went as follows: