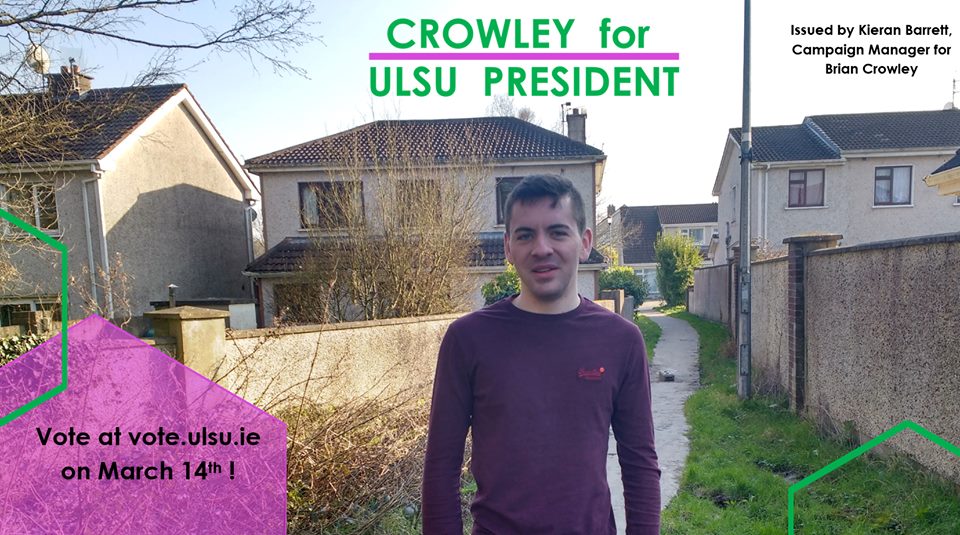 From: Depends who’s asking! Castlebar in County Mayo is where I grew up and went to school but my extended family are from Cork city. I’m from Limerick originally though and since returning for college over three years ago it has kind of become home to me.

Why’d you decide to run?

I think it was more so the fear of not running and that it would be something that I would look back and regret not doing. It’s a once in a lifetime opportunity when you think about it.

Have you always been involved in SU?

Yes, I have been involved with ULSU but that is not a selling point of mine in this campaign. I suppose I know the structures of the Union well enough that I know what I’m getting myself into. I also know the wonderful people that work in the SU well enough that I know I’d be comfortable working with them for a year if I’m lucky enough to emerge victorious at the end of this campaign.

Yes, both myself and my campaign manager are very active politically and I observe that there is a severe lack of politically active candidates running in this year’s Sabbat elections compared to other years. It can only work to our advantage.

Are involved with any club or society?

Yes to both, but again I appreciate that the vast majority of the student population are not involved in clubs and societies. It’s not President of Clubs and Societies that I am running for! I really do want to be a President for all students regardless whether they are involved in aspects of the SU or not.

It really is making a positive difference to students lives; I think if you ask any student in UL who has been on Erasmus exchange they will be able to back this up. We (it is ours after all) are really punching above our weight on an international scale.

The name change to UL Student Life (ULSL), while I agree with the reasoning, is not something I am too fond of. The fact you have referred to it as the “SU” in the question shows the difficulty that will be encountered in getting media publications to switch to the new name. I can see it being an annoyance to the next batch of Sabbatical officers throughout their term for this reason.

I’m trying my best not to think beyond the campaign week. It’s my final semester of my degree, a very hectic time. I had a job interview the first day of the campaign, I have two assignments due in the next week. The world keeps spinning. That said, I obviously wouldn’t put myself forward for it unless I felt the time was right.

To be honest, I haven’t properly assessed the other candidates so cannot answer that. I can only outline why I feel I am suitable; to which I would say I very in touch with the younger demographic of our student population.

Often candidates will have campaign managers and campaign teams comprised of fourth year students who will not even be on campus for when they begin their term. I am not particularly interested in looking for the fourth-year vote; I won’t be serving them a whole lot if they graduate in August. My aim in this campaign is to meet and hear the concerns of the people I would serve, if elected, so I built my campaign around this. I met many first year students on Sunday night (three days before polling day) who were not even aware there was an election! You must appreciate they are still new to campus.

Why did you choose this position?

President motivated me the most. It also seemed to have the best balance between interaction with the student population and the behind the scenes work such as sitting on various committees. Welfare and Academic are both very demanding in terms of the amount of face-time with students and I feel my skill set would be more appropriate for President.

What animal would you be if you had to pick?

What other animal would you change the UL wolf to if we couldn’t have Wolfie anymore?

A kangaroo, be gas.

What type of friend are they in their friend group?

That one is who always late, which probably isn’t the best thing to say if I am going for President! I am always “on my way”, even when I’m not.

I’m going to be real boring and say The Simpsons.