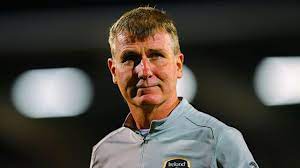 The Republic of Ireland earned a draw against Asian Cup holders and 2022 World Cup hosts Qatar in Hungary tonight.

Stephen Kenny’s side started strong with a goal from James McClean coming in the fourth minute but a decision almost went against them moments later when Qatari full-back Ró-Ró was fouled outside the box.

The challenge could have earned the home side, who are camped in Europe for their friendlies, an early penalty but the referee changed his decision upon further reflection.

Ireland looked dangerous in attack, especially on the flanks via Cyrus Christie and goalscorer McClean but left themselves open for a counter which Qatar tried to take advantage of.

The boys in green came close to a second before Robbie Brady had to make way for Troy Parrott after picking up an injury.

The half settled into the back-and-forth fashion mentioned above but the 2019 Asian Cup champions had the majority of the possession when the half ended and were thwarted by centre-back Shane Duffy during this period.

Qatar got their goal at the start of the second-half when Mohammed Muntari’s shot found the bottom corner.

Ireland’s attacks were few and far between in the second half but a strong period directly after their opposition’s equaliser saw several chances squandered.

The game became boring as it went on with little chances being created until the game came back to life in the final 10 minutes.

Both sides created chances worthy of winning the game but none were converted, most notably Josh Cullen’s last-minute header, courtesy of a Cyrus Christie cross, which forced Qatari keeper El-Sheheeb to dive low to deny Stephen Kenny’s side their first win since 2019.

Questions will still be asked of Kenny’s approach by many pundits and armchair commentators alike after an uninspiring game in the Nagyerdei Stadion.

A win is sorely needed but it is clear that the players know the game plan that Kenny wants – it is just a case of getting results.

The side is not scheduled to return to action until September at the latest with Portugal (A), Azerbaijan (H) and Serbia (H) to play then.