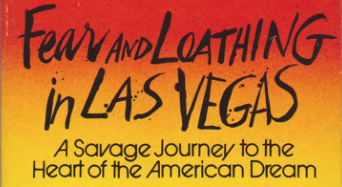 There comes a point in life when you rapidly realise that no matter how hard you may struggle against it, or even attempt to embrace it, time marches on with a cruel and cold indifference.

The day of my seventeenth birthday it happened to me, my head felt heavy at the thought of never being 16 again; perhaps due to a regret that I did not, as John Mellencamp advises ‘hold on … as long as You can’.

A similar sentiment is echoed in Hunter S Thompson’s seminal post-mortem of the sixties counterculture. Indeed a certain existential dread of never being able to experience the San Francisco of the mid-sixties as described by Thompson leaves a pit of emptiness at the bottom of my stomach if I give it too much thought.

The book gives an erratically paced description of what Thompson and his attorney do in order to ‘report’ in Las Vegas. Thompson is seen as the father of “Gonzo” journalism; this visceral POV of whatever captures the authors mind at the moment of writing, again and again we are assaulted by ramblings on his state of being and dissections of the society around him.

Before beginning to comprehend what is happening, we are thrust back into the action of the story, often a few paces ahead of where we left off, almost as if the action played on whilst we get the commentary varnished on top.

Thompson may have genuinely been “twisted” on the small pharmacy of drugs and alcohol he apparently sustained himself with throughout the course of the novel, or the pacing may genuinely be an intelligent device to convey the state of mind of someone so intoxicated. I opted to believe it was the latter, as even though the narrative comes off as disjointed and manically paced, it does have a pleasantly coherent rhythm.

I attempted several times to leave down the book and pick up later where I left off, but found I had to backtrack nearly to the beginning of a chapter to gain any sense of chronology. Fear and Loathing is certainly meant to be read in as few and as long as possible sittings.

It’s difficult to rate the novel according to any ‘normal’ rubric, as the saying goes ‘art is subjective’. In this case, heavily subjective. Even describing the book as a novel does it a disservice, it’s more of a travelogue, albeit heavily bastardised within the genre. It’s a good book, the psychotic storytelling leaves a sense of satisfaction when eventually everything works out. Taking the events as just part of it, there’s no big buildup to any massive climax, it’s just a story, the surreal constantly surfacing as no big deal, a recollection of what happened, through the lens of a plethora of chemicals.

When looking at the way it offers a scathing evaluation of the new ‘woke’ generation that emerged in the form of the sixties, to where they are in the the book, the discomfort the reader feels as Thompson demolishes that idyllic lifestyle and holds up a mirror to their drugged up husks, we see the true context; an upsetting humility. And that is executed well.

I wouldn’t recommend reading Fear and Loathing as just a story, you’d be disappointed by a traditional maxim of evaluation, again there’s no major twists or turns, nor a deeply complex plot, it’s just a recollection sprinkled with anecdotes and musings of ‘where next?’ for the love generation. In short, it’s about a trip, in the narcotics sense, and the physical journey too. It could also be about two professionals taking an unearthly amount of drugs. That’s the thing though, you can take what you want from it, it’s your call.

“Our energy would simply prevail. We had all the momentum; we were riding the crest of a high and beautiful wave.”