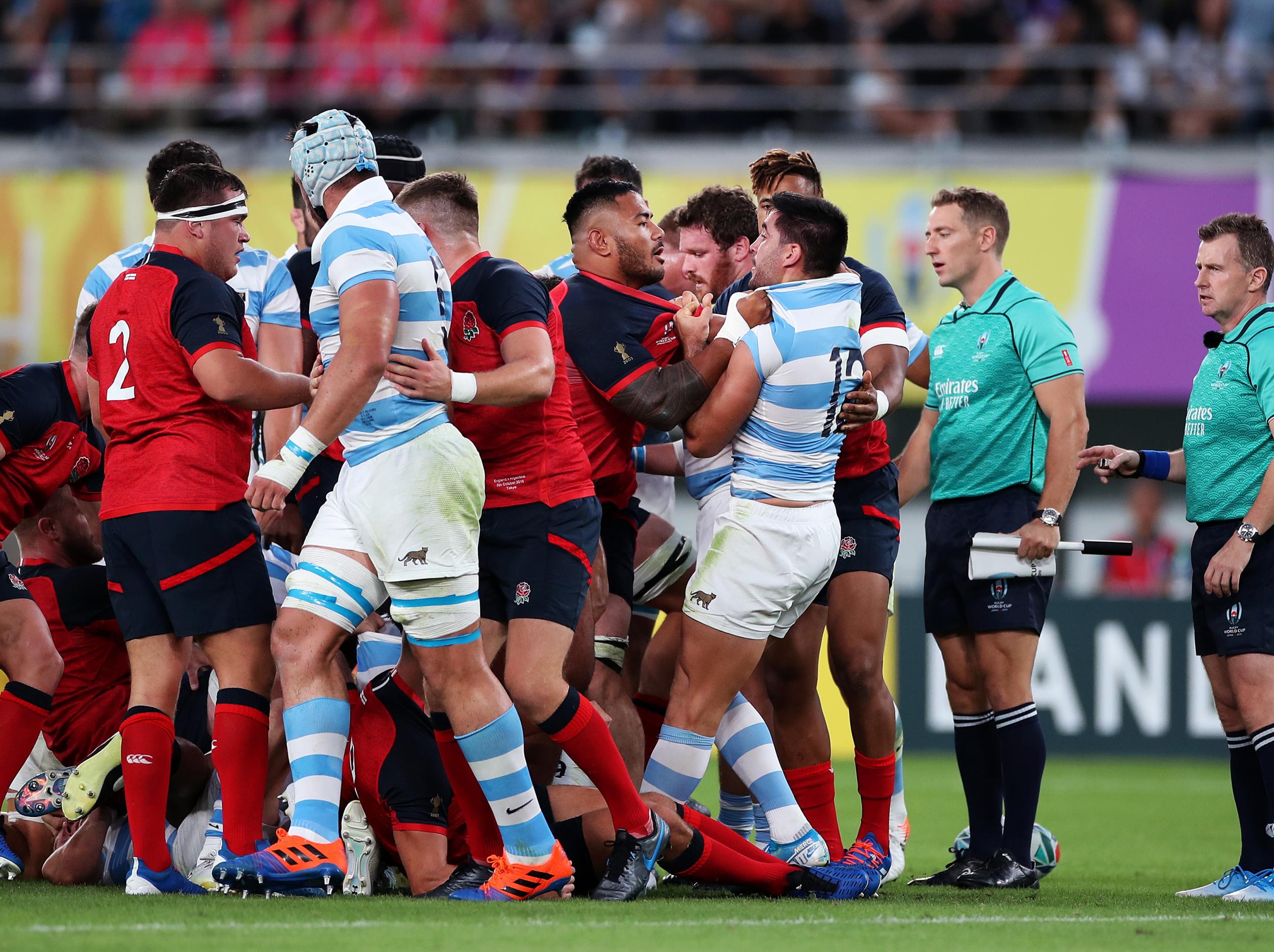 England played Argentina this morning in what was probably the biggest game of the week in this Rugby World Cup (RWC).

With a victory, England would essentially knock out Argentina and keep their fight up for Pool winner.

Argentina were looking to find consistent form in this game. Argentina have been a team of two halves in both of their games and this needed to change if they were to beat England.

The Argentines had an electric start and nearly capitalised on an England knock-on. However, Moroni was beaten to the ball by Elliot Daly.

The following scrum was won by Los Pumas and, again, they nearly capitalised on it. Elliot Daly once again England’s saviour. Three penalties conceded in the build-up left England three down after Urdapilleta’s kick.

England looked deadly when given the chance to attack. A fantastic maul led to Johnny May getting it out wide and having an easy route to the try line. Farrell’s kick proved too tough for him at this early stage.

An off-the-ball scuffle marred the game early on, with numerous players involved. A late tackle on Farrell was the cause. Matero was swarmed by English players. What these teams don’t know is that they’ve both shown their weakness to the world – discipline – something very easy to take advantage of in a contact sport.

Tomas Lavanini was sent off for a terrible challenge on Owen Farrell. Call it karma if you will but these tackles shouldn’t happen in this sport. A record 5th red card in this RWC.

The resulting penalty was another miss for Farrell.

Manu Tuilagi was in trouble soon after but avoided a card after tackling Emiliano Boffelli in the air. 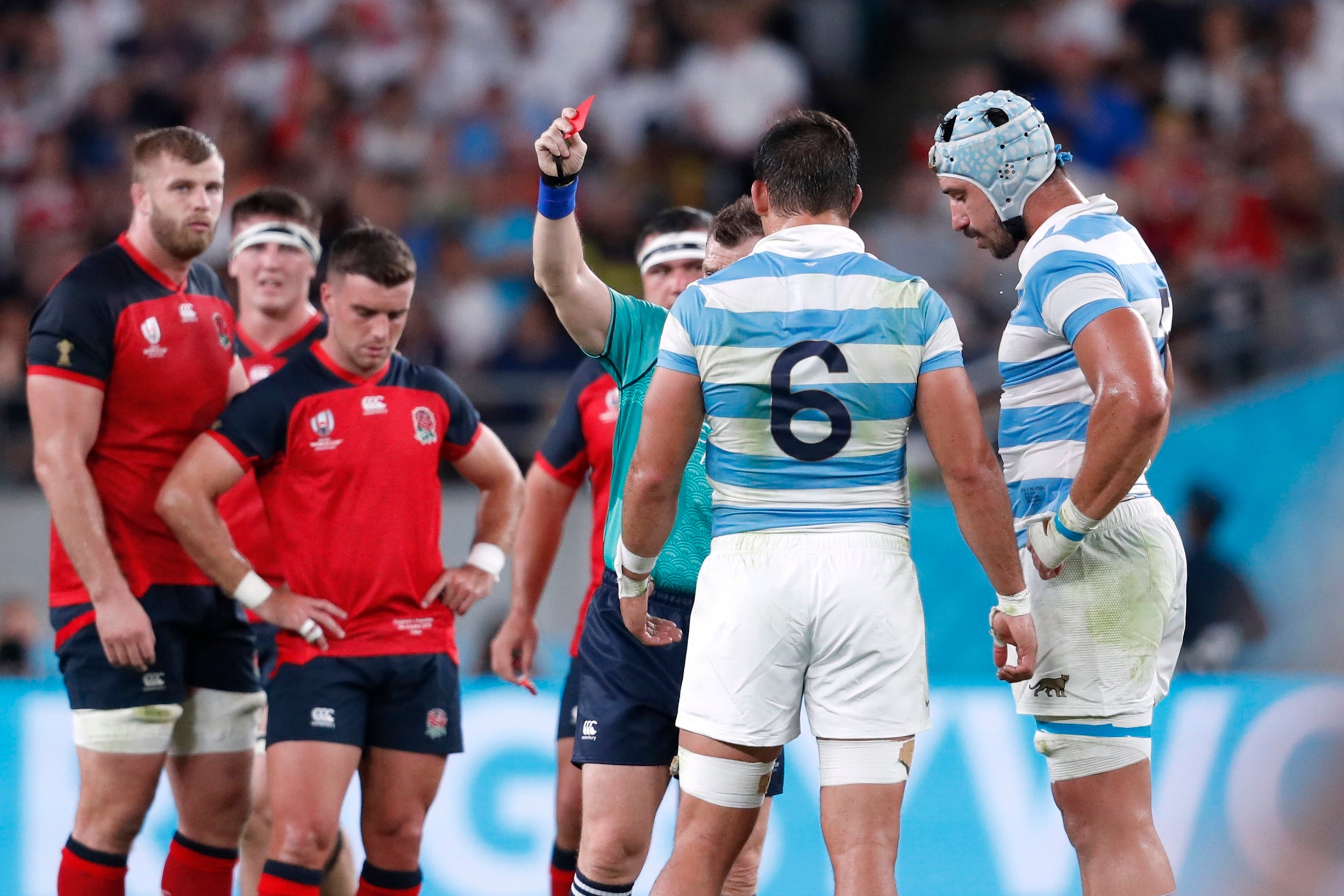 The game got a lot quieter for the next five to ten minutes, with the ball staying in the midfield for the majority.

Fantastic play from a lineout brought England to the try line on the 33rd minute. Argentina held off the close-quarter attempts but England persevered out wide with Elliot Daly – his first RWC try. Farrell missed yet another kick, very much an off day for him.

More pressure from the English punished a poor and fatigued Argentine defence. After 20 phases, Ben Youngs got himself over the line. Farrell couldn’t convert from a tough angle.

After the two late scores, the half finished with England leading 15-3. This could have and should have been more.

A bright start to the second half for England led to a George Ford try just five minutes in. Farrell was able to compliment the bonus point try with an extra two points.

A brilliant kick from Ford, after great work from Itoje, brought England close once again.

Agustin Creevy was brought on for Los Pumas and became their most-capped player by doing so, earning his 88th cap. Leinster legend, Felipe Contepomi, previously held the record.

Farrell added three more to England’s, as well as his own, personal tally.

Mako Vunipola came on for Joe Marler. England fans will be happy to see Mako back but will be worried about how serious Marler’s injury could be.

The game lost its momentum as time went on, with England looking happy to defend their lead. 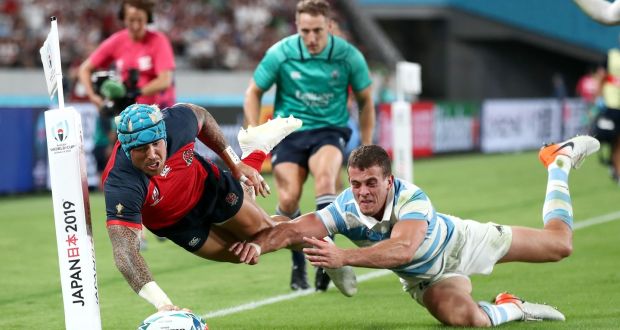 Moroni managed to get over the line in the 71st minute to provide consolation for the Pumas, the extra two points coming together for them.

Jack Nowell returned to an English shirt in fine form with a lovely try – a quality player. Farrell got the conversion with a beautiful kick from a very tight angle.

Another scuffle happened after the try. A terrible display of ill discipline from both teams who are surely to have lost a lot of respect among neutrals.

Farrell finished off the game with an easy kick to bring his kick success up to 50%.

England will be happy with the performance but disappointed it wasn’t 15 v 15. They are the first team to qualify for the quarter-finals in this RWC. However, their discipline must be questioned and condemned.

That being said, Argentina’s discipline is even worse. They appear to be sore losers – their laughable tantrums are nowhere near professional. They’ll be heading back to Buenos Aires with their heads down.

A good game marred by ill-discipline, rugby fans will be hoping there’s a lot more respect in future games of this RW