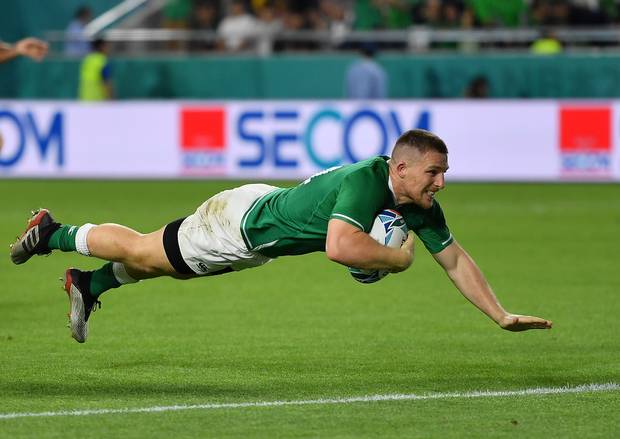 Ireland, favourites in this tie, were looking to get back on track after a humbling loss to hosts, Japan. With Russia having minimal chances of getting past the pool stages, this was thought to be an easy win for the Irish by many.

Ireland started off brilliantly, with Kearney getting over the line early thanks to good hands and quick passing. Sexton added two from a tough angle to put Ireland seven ahead.

Russia got into the game after conceding early and provided decent competition for the Irish.

Ireland weathered all the early Russian pressure and punished them once more. Sexton placed a lovely kick in for O’Mahony who placed it down underneath the posts. An easy conversion for Sexton meant a 14-0 lead for Ireland after 14 minutes.

Georgian inside centre, Golosnitskiy clattered into the post chasing down O’Mahony and was taken off, replaced by Vladimir Ostroushko.

Ireland came close once again with a crossfield kick to Earls. However, the Munster man could not hold onto it under pressure.

Ireland continued to assert their dominance but once again failed to capitalise, a knock-on from O’Mahony ending their play.

Jordi Murphy was forced off through injury in the 28th minute, replaced by CJ Stander. A very unfortunate injury as he had only joined up with the squad on Sunday.

Russia’s pressure seemed to annoy Ireland a little, with the Irish turning back into the ineffective and rusty machine that they were against Japan.

A forward pass took the sting out of what would have been a try for Conway. This was a worrying third time it hasn’t come together for Ireland in the Russian 22.

Russian number five, Bogdan Fedotko, was sent to the sin bin for a series of transgressions before the forward pass.

Ireland finally got over the line once more after this, Rhys Ruddock planting it down this time. Sexton had another easy conversion and put Ireland 21 up with half-time looming. 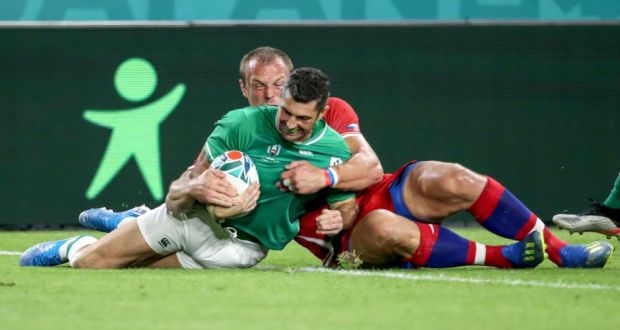 The second half started poorly for Ireland who made numerous errors. Russia repeatedly failed to capitalise on them and Ireland stayed comfortably ahead.

Russian lock, Ostriko, was binned for a bad clearance tackle on John Ryan. It could easily have been a different colour if Ryan was standing up straight.

Ireland conceded yet another penalty. Russia opted to kick but the result was woeful. It was very clear, however, that Ireland had lost their momentum.

They did manage to get their fourth try when Keith Earls and Andrew Conway linked up to get the job done. Sexton added the extra two to bump the score up.

Ireland could have added more but hectic Russian defending forced a knock-on from Iain Henderson. 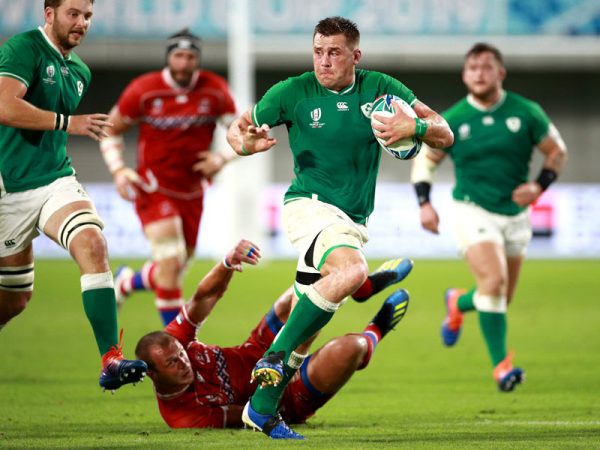 Fantastic play by Larmour and Earls led to a Ringrose try, Carty converting. The converted try put some gloss on a disappointing game for the boys in green.

Ringrose appeared to add a second in the game but the TMO deemed his earlier play to be a clear knock-on.

This disallowed try and a handling error that followed summed up Ireland’s game – a mix of unlucky and sloppy. A 35-0 win is always welcome but the performance will fail to scare Samoa, New Zealand and Africa.

Russia tried their best and, considering the possibilities, a 35-0 win isn’t the worst thing to happen. They were never going to get out of the pool stages but they have entertained.

A lacklustre game of rugby which was over before the whistle started.

There will be far more entertaining games down the line in the RWC, thankfully.