Our sports editor, James Roulston Mooney has more on the latest up and coming Irish musicians 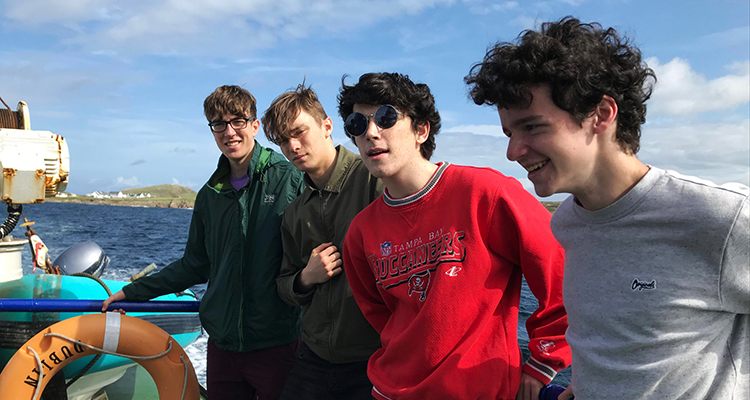 Donegal band Sheerbuzz have been forced to do things differently this year because of the COVID-19 pandemic.

Answering as a collective, they talked about their lives, their music, fundraising and their hopes for the future.

The band members – Lachlann Ó Fionnáin, Evan McGinty, Adam Grady and Lughan Devenny – all have other priorities that are of more importance.

They said that “it’s weird being anything these days, but I think the band is the least of our worries…we get our education-y things done first then we get to writing as soon as we can.”

The group have begun work on a new album recently and are enjoying coming up with the sounds that they like.

However, any recording of new tracks will have to wait until they know it is safe to do so.

The lads give every track a lot of attention in each part of the production process but agree that their best stuff is written whenever they are under pressure.

Their writing process is a mix of trial and error and convincing themselves that the song sounds good, with the band listening to the song multiple times and looking at what it says from different angles.

As for their music, it has reached radio stations worldwide, including Melbourne’s 3RRR and BBC Radio 1.

Speaking about this, the band said it is bizarre to them but also very heartwarming.

They think that “the fact people listen to [them] on purpose is so cool.

“Over the past year, we’ve had hundreds of people listening to us every week, and when we released the EP, we didn’t even expect anyone outside our friend group to hear us. It’s a very fulfilling feeling making something and seeing other people invest so much energy in it.”

The quartet have also raised money for bailout funds and the Irish refugee council by selling hand-painted CD covers.

Lachlann revealed himself as the one who did the artwork and the band went on to say that “after seeing the video of George Floyd, [they] all knew there was something [they] had to do.”

They think that everyone has a right to use their platform however they feel but “raising awareness for things you’re passionate about is definitely a nice thing to do.”

Altogether, the group managed to raise over €350 for their chosen causes.

The group have done shows with the Regional Cultural Centre in Letterkenny during the pandemic that were livestreamed online.

The lads noted that it was great to be back playing and they were delighted with how the livestreams went but they did find the cameras intimidating.

They do not have any future gigs planned yet, but they cannot wait to be able to return to normal and play on front of fans again.

“We miss standing gigs definitely, we played in the Balor in Ballybofey [before the restrictions were brought back in] but we really realised how much we missed gigs. The crowds, the chants, sweaty mosh pits, it’s difficult to think of how they felt at this stage but it just goes to show you don’t know what you’ve got till it’s gone.”

Sheerbuzz described the Donegal music scene as “brilliant” and talked about how they feel towards the other bands personally.

The guys said that the people involved in Donegal are some of the most talented and nicest people that you could meet.

“There’s so much variety and support for one another. It’s a really lovely time.”

They would love to be able to do “another packed out RCC with [their] friends Happy Out.

“Can’t forget the burrito before the show too.”