Ireland scrape a win against Scotland in a competitive affair in Edinburgh, An Focal’s James Roulston Mooney reports. 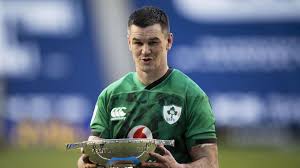 Ireland squeezed past Scotland to win the Centenary Quaich after a tight affair at BT Murrayfield this afternoon courtesy of a late Johnny Sexton penalty.

The men in green started strong with their dominant lineout once again being their best asset.

A James Ryan steal led to a fortunate try for Leinster’s Robbie Henshaw after Sexton’s had got the game’s first points to give Ireland an 8-0 lead very early on.

The Scots rallied together to overturn the deficit with the help of some error-strewn passages of play from Ireland.

Racing 92 fly-half Finn Russell led Scotland’s counter-charge, getting two kicks between the sticks and a try underneath them to get his side into the game after Hogg learned that luck was on his side.

However, Ireland continued to batter Scotland with their physicality and worked hard to retake the lead with Tadhg Beirne and Keith Earls working together to earn a penalty.

Russell missed one at the other end and Scotland number nine Ali Price was penalised for offside, allowing Sexton to add another three points to the board before the half ended.

Ireland started the second half as they did the first.

Physical dominance from the Irish led to a second try for the side with Romain Poite believing that Tadhg Beirne had grounded the ball on the Scottish try line after some personal investigating.

Sexton added a penalty after a second conversion miss to take the lead to 14 but Scotland fought back once again.

Huw Jones got over the line to give the game the competitive edge it had lost momentarily after a now-common lapse in defensive awareness from Andy Farrell’s men.

James Lowe threw a ball into touch and Scotland continued their ascent from the depths of defeat to draw level in the 74th minute, having been denied moments earlier by Will Connors.

Hamish Watson placed the ball over the line and Finn Russell made no mistake with his conversion.

Ali Price gave away another penalty immediately after this for not releasing the ball following Ryan Baird’s block of his kick.

Sexton stepped up to retake the lead for Ireland for the third time in the match and the side held on to take four points home with them.

Farrell & co. will enter next week’s game against O. Farrell & co. with eyes on a positive record in the tournament and a top-half finish to see out the Six Nations.

Gregor Townsend’s men will feel like they have been their own worst enemy today but will have Italy to cheer them up, and of course, that very important game against the French is yet to take place.

Both sides are out of contention for a championship win after this weekend’s results but can end this year’s Six Nations with smiles on their faces after mostly inconsistent showings.