Ireland dominated England to finish off this year’s Six Nations on a high, An Focal’s James Roulston Mooney reports. 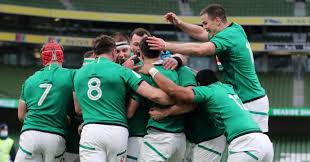 Ireland looked to put width on the ball early after pressuring the first England lineout.

England tried to assert dominance on the Irish after a second lineout win with lock Maro Itoje and their flankers Mark Wilson and Tom Curry making themselves known.

England captain Owen Farrell got the first points of the game after the English steel led to a penalty on the 22-metre line.

A fourth penalty inside 10 minutes gave England another lineout on the five-metre line but the Roses were held up by Iain Henderson.

Outside centre Robbie Henshaw fought back to force the English the other way and earn Johnny Sexton a chance at goal, which he took.

Prop Dave Kilcoyne’s match ended early after taking a hit from Bristol’s Kyle Sinckler and was replaced by Cian Healy.

Number eight Jack Conan won Ireland’s first lineout and played in Moyross native Keith Earls who squeezed past Johnny May to get over the line.

Sexton added two points to the scoreboard to get the home side into double digits before 25 minutes.

England replied immediately with a kick of their own after winning their own lineout again.

The kick put Farrell in exclusive company as he became the third player to score 500 points in the Six Nations, joining legends Jonny Wilkinson and Ronan O’Gara.

Ireland showed their strength against the strongest scrum in this year’s tournament, forcing a mistake from Mako Vunipola.

Johnny Sexton made no error when going for the posts and increased Ireland’s lead to seven once again.

Another blunder led to another slick first-half attack for Ireland.

Jack Conan finished off a fantastic Ireland attack that was destined for a score after some smart moves from a selection of the side’s stars.

Sexton kicked the conversion over and kicked the ball out minutes later to end the half with the home side up 20-6.

England started the second half looking to score as quickly as possible but Irish full-back Hugo Keenan stopped them twice.

A fantastic finish from Keith Earls looked to hand Ireland their third try but a knock-on denied the Moyross man his second.

Referee Mathieu Raynal pulled it back to an earlier penalty and Sexton opted for the posts, making no mistake.

England fullback Elliot Daly almost got away for a spectacular run but was stopped by CJ Stander in a tackle that underlined how important he was to this side over the last five years.

Owen Farrell was taken off for a head injury assessment after a collision with Iain Henderson and Dan Robson took his place in the XV.

Tadhg Furlong won another penalty in the scrum and Sexton added three points once again.

Bundee Aki was sent off with 15 minutes to go after his shoulder contacted the head of Billy Vunipola.

Ben Youngs got England’s first try of the game in the succeeding play, but the Irish fought back and added six more points in four minutes to take their total to 32.

Ireland took their foot off the gas after Sexton’s final kick with Conor Murray missing the climax and Johnny May getting a second score for England with the last notable play of the game, this time converted by Daly via drop-goal.

Ireland ended their Six Nations on the most emphatic high of the Farrell era, collecting their second piece of silverware of the tournament, while CJ Stander rode off into the sunset after catching the slipstream.

Eddie Jones’ England made last week’s performance look like a fluke with a submissive display and doubt will surely creep back into the minds of England fans.

A new hope dawns for the Farrell era while the sun continues to set for Eddie Jones.

An Focal MOTM: Every Irish player.