Wales fell to France at the final hurdle. An Focal’s Sean Finnan reports. 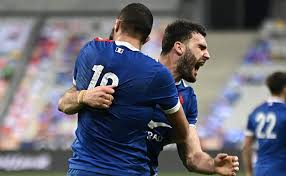 Have you taken a moment to breathe yet? Take one now if you are still on the come down to what would’ve been the tensest championship/slam decider in Six Nations history, but instead, it’s the best penultimate game in six nations history.

Historic is one way, but not the way everyone hoped it be, and certainly not what Wales hoped it be.

This highlight of highlights of what has been an entertaining Six Nations with more than its fair share of games – England V Scotland for the historic win, England v France for the “oh shit England are back to their best again” moment, only for Robbie Henshaw to show how weak that assumption was (as weak as Eddie jones hairline).

But the other games that have been the highlight from these six nations so far have been, and this is not an understatement, every single Welsh game.

Wales had the perfect setup, start, middle and projected end. And they used everything that they could, every crazy moment to put them on their way for the unlikeliest of Grand Slams, and all that stood in their way was Dupont and them guys.

Dupont let them have the ball for a bit, while he charges up his brainpower to think of the most ludicrously good decision at any given time.

The game started as fast as Conor Murray racing down the touchline after getting yellow carded today, knowing if he makes it to his car quick enough, he can beat the Dublin traffic.

Wales and France, from kick-off, threw all their chips in, France are notoriously good from the kick-off and Wales from the first whistle held the intensity in their defence to the end, or almost to the end, but we’ll get to that.

France opened looking to exploit Wales ridiculously strong line by following the golden rule – can’t go through, around, or under, then go over – the pressure on Adams from the French kick resulting in French gaining territory just outside the Welsh 22.

The early start did not fail to disappoint with Dupont leading a ridiculously quick string of offloads that forced the sturdy wall in and out and finally, to crack in awarding a penalty, a great offload into the blindside of a French lineout slipped in Jalibert only for it to be held up by the Welsh defence.

It was not before long that the French’s dominant offence finally produced a merited score, Taofifenua getting over to give the French the lead.

The Welsh respond lightning for lightning and great box kick from Williams, collected by Davies who offloads to North, who does George North things and drives through the French line, resulting in advantage and a Welsh scrum, the Welsh physically at the game line pushing the French back to their try line, with no one being able to stop Dan Biggar from equalling the scoreline.

We are only at the 11th minute.

Again, the French pressure on the Welsh kicking earned the French a lot of territory that Dulin used to chip in behind the Welsh defence for Jalibert to collect and Dupont to score his required try of the game.

It was clear that both teams were going to rely upon their strengths and piss into the wind and hope they come out best untouched.

But while the French strength only turned on when they were in possession, the Welshmens’ strength was keeping them out of possession, battering for every ball with unrelenting stamina to produce great pressure, turnovers and points.

The second phase of the first half was this to a tee, with another try in response from Navidi, who put in an expletory performance, the French in the second period suffered from poor kicking from Jalibert, who before long was replaced due to a H.I.A.

The Welsh earned scrum-after-scrum putting their physical superiority to good use in winning turnovers. A soft high tackle on Fickou gave French a pen, much against the run of play, you’d be forgiver for thinking the referee Luke Pearce(who had a great game, props to him, not those props though) you’d be forgiven for thinking he gave the soft pen to France just because he wanted to ref an open game, and not (to use the steal, but very much “borrow” Squidge rugby’s term) to see another jammy performance in Paris.

The shift in momentum so that it was not just a mauling by Wales showed how regressed France had become, their mind not being fast enough for each other’s bodies, producing handling error after handling error.

Wales went into halftime level on points with France but must have held a mental edge, knowing that their game plan was coming together better than France’s.

The direction of the wind was changing, and that meant the jam-coloured piss was hitting France.

A great offload to Rees-Zammit in the middle of the park saw him batter off 3 French players with the resulting ruck breaking through to the 22, Adams winning advantage, the resulting penalty and the inevitable 3 points from Biggar.

The sign of life was creeping back into the eyes of France, a great dummy from Dulin opened up a pocket of space, but the unrelenting Welsh line kept giving the French line a bit of rope until they eventually slipped and hung themselves – a lineout to Adams produces a great kick into the French defence, with an offload to Adams earning him the try, but did it?

Well the TMO checked for so long it would’ve been enough time for Eddie Jones to say the word “mate” more times to equal the number of stars in the night sky.

France had finally woken up, it made Wales take notice that the men in the blue jerseys had actually shown up to play rugby, some Dupont level offloads by Dupont resulted in an offside from Wales that France came back to, with Ntamack picking up the 3 points.

The French, aware of the tightrope that they were dangling off, held off kicking repeatedly but tried even riskier plays to keep hold of the ball (see Dulin running from his try line past 5 Wales forwards who would love nothing better to do than see some French cheese smothered by Welsh jam).

Dulin wiggled out to give Thomas what would’ve been the try of the tournament, but the Welsh booted him into touch and the ball with him.

The resulting lineout maul seeing Rees-Zammit score what was to me, a perfectly good try but the TMO thought otherwise, so alas we cannot have good things, like some sweet, sweet jam, but we can have the English having a reverse triple crown, we can have that though – that is certainly allowed.

The ending 15 minutes were……. Hectic is a word you could use, after Rees-Zammit disallowed try was brought back for a pen which Bigar slotted, it gave Wales 13 minutes to defend a 10-point lead.

The French bet it all, blue wave after wave at the Welsh line. Slowly eroded the Welsh back to their try line, with some valiant defending from the Welsh, using every ounce of their strength to hold the barrage of French bravery, finally breaking through after almost 6 minutes of last-ditch rucks and pens.

An eye gouge by Willemse chalked off the French try, with a red card for Willemse. Wales’ valiant display was lawfully upheld. France switched off, the demoralised empty reward blown by a split-second act of foolishness, but Wales valiant display also dealt a price, stamina, Wales were drained, having been on the defence for nearly 10 minutes straight, the flurry of yellows came for Wales as they tried to tick the clock down by using every unlawful tactic in the book.

Again, the last-ditch Welsh defending resumed but not for long as the French captain Ollivon drove home to set up the nerve-shot ending 4 minutes.

The French knew that one mistake and the Welsh would wind the clock down, the red wall was ominous, the game line slowly bouncing off the Welsh flesh, a turnover finally came for Wales, their physicality at the game line coming up trumps for one last time.

Or so they thought.

A mistake from Welsh elder Alun Wyn Jones gave the French their last shot, a lineout in the Welsh 22, the repeat of the Alamo style defence, the 13 men Welsh, against the 14 men France.

The French finally used their numerical advantage, shipping the ball out wide from the ruck for Dulin to score the winning try uncontested on the wing.

Heartbreak, heartbreak in every single Welsh heart, with my Irish one included. Wales were fingertips away from the unlikeliest of grand slams and will now have to wait to see if the championship disintegrates in their hands also. Needing Scotland to put up a fight against France, to either beat them or keep the French to a close scoring game.

And while much of what Wales did this Six Nations was not luck, a smartly fought set of 5 games in which in all 5 they were the better side.

It is in the bizarre moments that Wales prospered this campaign using every call to their advantage and earing the luck that resulted.

But if you live by the jam,

You must die by the jam also.

What a Six Nations.