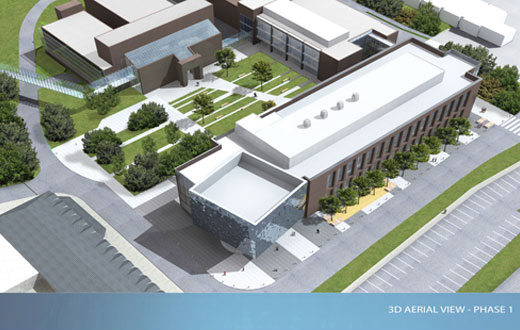 UNLESS you are incredibly unobservant or indulgently self-absorbed you will have noticed, depending on your perspective, a couple of awe inducing phallic symbols of modern engineering stretching skywards or alternatively two towering eye-sores puncturing the UL skyline.

Large scale capital projects are particularly welcome in trying economic times, and in a boon to the local economy and wider ‘knowledge economy’, the project will provide 225 jobs, of which 150 are short-term construction jobs while 75 are long-term sustainable research and teaching positions in UL. Funding for the project will come largely from philanthropic donations with UL’s most enduring supporter Atlantic Philanthropics stumping up over half the €52m bill having committed €26.3m to the project. The balance will come from UL funds and state funding.

The project and ultimately building is named after the world renowned Tipperary born scientist, John Desmond Bernal (he has an extensive Wikipedia page so he must be famous), often referred to as the father of molecular biology for his pioneering work on X-ray crystallography. The Neenagh native spent the majority of his academic and working life in Britain, where he made a large contribution to the Normandy landings in World War II, by helping with the mapping of the landing sites.

The building is designed by UL favourites, RKD Architects, who have previously designed the Kemmy Business School and Tierney Building for the University. The four story building, replete with scientific laboratories and lecture theatres, is due for completion in March 2015 with full occupancy anticipated by April 2015.

Taoiseach Enda Kenny speaking at the project’s launch in October said: “The 150 construction jobs will be a great boost for the sector and I also welcome the 75 high-quality, high-skilled permanent jobs in the project.”

Also speaking at the launch, UL President, Professor Don Barry, said; “The imperative in growing the University and contributing to the economic development of Ireland is premised on developing a deep knowledge infrastructure and human capital base that will attract investment and stimulate the development of high-end industry and services at the core of a revitalised “smart” economy.”

Vice President of Research at UL, Dr Mary Shine, said: “Through the Bernal Project the University of Limerick is attracting top researchers from some of the world’s top 100 ranked universities to bring their expertise to Limerick in support of Irish recovery and growth. This investment will have major significance in promoting Ireland as a location for Foreign Direct Investment and job creation particularly in R&D and advanced manufacturing. The Bernal Project provides an opportunity to align the strategic needs of the State with those of the University in their common goal to impact economic, educational and social development nationally.”