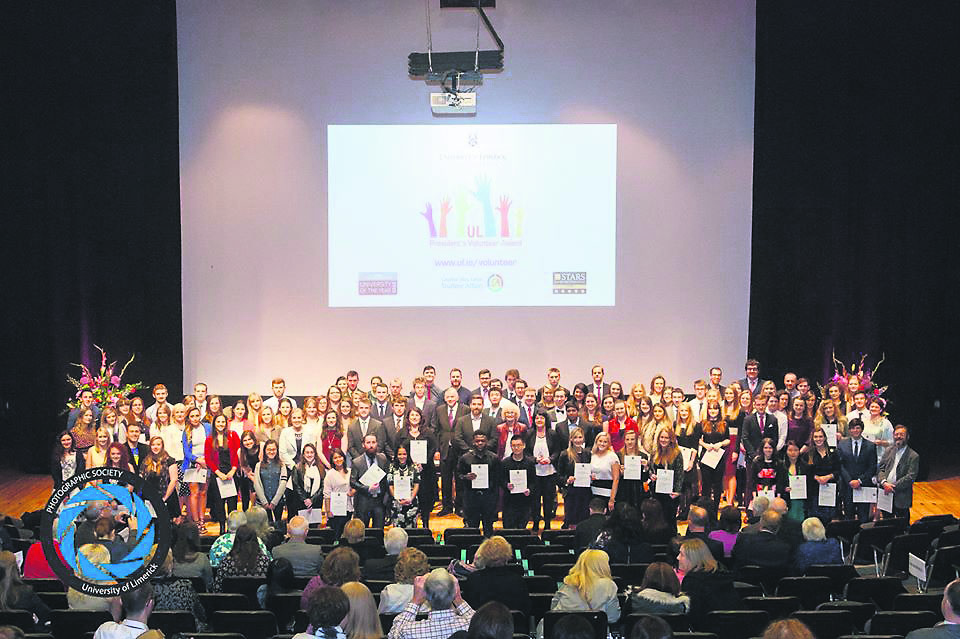 On Friday the 25th of September, an event took place on campus that will be etched into the memories of those in attendance for years to come. The 5th Annual President’s Volunteer Award Ceremony went off without a hitch, and I definitely wasn’t the only one leaving the Concert Hall with a huge grin on my face.

The PVA Ceremony might not be an event that has students scrambling to obtain tickets, but it was actually one of the best student events that I’ve been to since joining the UL student body in 2013.

The ceremony began with a warm welcome from the Student Hosts: Stephanie O’ Flanagan, and Cathal O’Connor. The pairs’ chemistry and charisma set the tone for what was to be a spectacular ceremony.

We were then treated to a captivating video which showed some of UL’s students talking about their volunteering experiences. The testimonials in this video, given by the student volunteers, opened my eyes to the sheer variety of volunteering opportunities available in UL, and the vast wealth of benefits for those involved in volunteering – not just the organisations, but the students themselves.

As the PVA recipients filed into the Concert Hall, Florence and the Machine’s ‘Ship to Wreck’ played over the speakers. The applause and cheering drowned out Florence’s sultry tones as proud friends and family congratulated the volunteers. The audience clapped a little louder having just watched the testimonial video which allowed us to catch a slight glimpse into the massive amount of work done by the student volunteers.

University of Limerick President, Professor Don Barry then took to the stage to warmly welcome everyone to the ceremony and declare how proud he was of the hardworking students who had given up so much time to volunteer with the various worthy organisations.   He expressed gratitude to the student volunteers who make this university one of the best in the country, and to all the volunteers who helped to make the PVA Ceremony such a successful event.

Next up was guest speaker Brian Higgins, CEO of Pieta House. He told of his past experiences as a volunteer – a list which was as long as my arm. Volunteering is often merely looked at as a way to spruce up one’s CV and to impress potential employers, but Brian Higgins left everyone looking at volunteering in a different light. Volunteering not only looks good on a CV but can also steer one down a career path that they might never have thought of otherwise.

After the inspirational speeches from Brian and our Professor Barry, the 2015 PVA recipients were called on stage to receive their well-earned PVAs. Roll call is not the most exciting of things to sit through at the best of times, but this usually tedious exercise was made less so by videos which were played at intervals during the ceremony, granting some relief from the monotonous calling of names.

These videos gave the audience an insight into some of the volunteer organisations, and it was brilliant to see such diversity in the volunteering opportunities available to UL Students.   Something that really stood out to me in these videos was said by Tony Sheridan, who received the Gold Award for his work with Pieta House.

Tony said that volunteering is the most selfish thing he does. This struck a chord with me and all the members of the audience because when you think about volunteering, you think about giving, when in actual fact the volunteer gains far more from volunteering than they give. If anyone went into the PVA Ceremony having not volunteered before, there’s no doubt that they would have been inspired to volunteer having heard from the student volunteers of UL.

What also became evident from these videos was the large amount of organisations that work with the Community Liaison Office in order to provide fantastic volunteering opportunities to UL students. The work done by these organisations, alongside the Community Liaison Officer, Gabriella Hanrahan, is to be highly commended. These benevolent, philanthropic individuals dedicate their lives to helping others, and UL student volunteers gain hugely from working with such compassionate people.

It was honestly so humbling to have witnessed the generosity and selflessness of the students who had given up their time throughout the year to volunteer with great organisations.   Without a doubt the UL PVA programme is the lifeblood that flows through the veins of the University of Limerick, and what makes our university the Sunday Times University of the Year 2015.

Go to www.ulpva.ie to learn more about the amazing opportunities available.