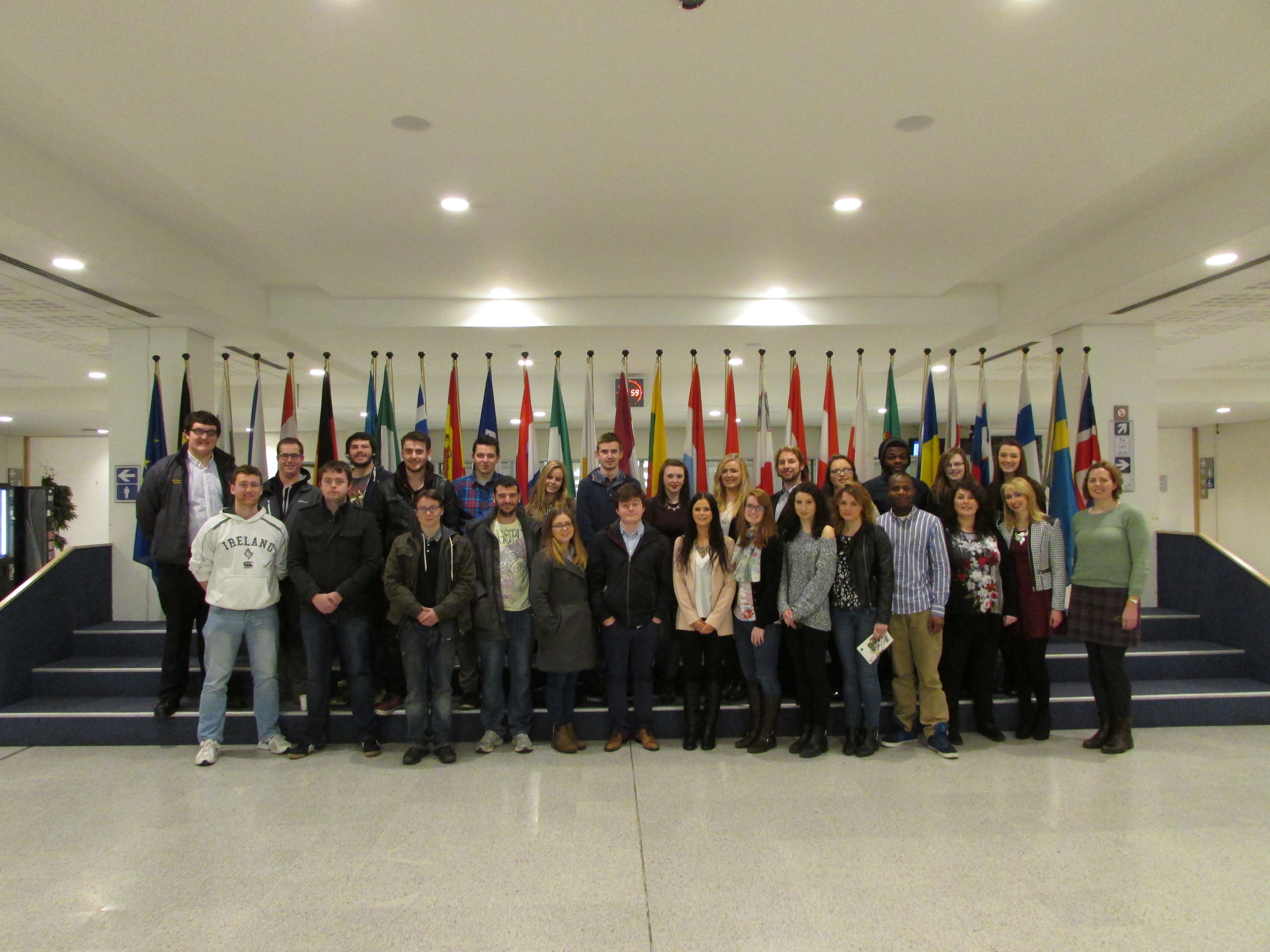 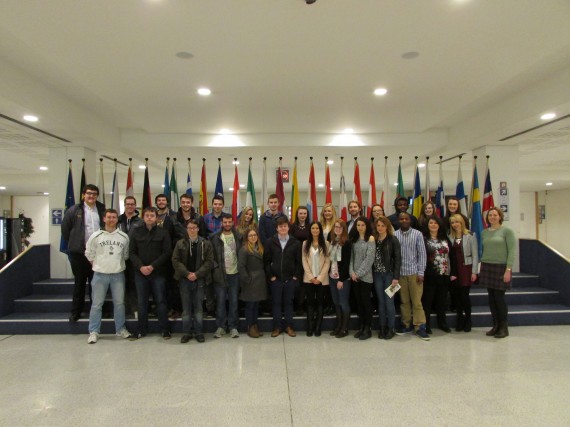 In the dark early hours of the morning of the 19th of January thirty members of the University of Limerick’s Students Council set off for Brussels to learn about the EU and it’s governing structures. The group gathered, half-awake yet full of excitement for the days ahead. Through nothing short of a miracle all of us were on board, accompanied by our passports and all on time! Once the group landed in Brussels it was clear this was a whole new ball-game. The streets, the airport and the train station were all teeming with people, all moving in different directions. In a convoy of suitcases we made our way to the hostel, none of us aware of the actual route taken but more the detail of the suitcase in front of us. In the hostel the group was given a few words of warning about Brussels. Pickpockets are rife and the city is a labyrinth so always travel in large groups and let the group leaders know where you are. These words were drilled home before and throughout the trip. It became almost the motto of the trip along with “Belgian beer is strong so take it easy”.

The first day in Brussels was dedicated to getting there and getting settled. On the Tuesday however, the group set about experiencing what the city had to offer. This began with a city bus tour which gave us a brief look at the various landmarks throughout the city while also providing a better idea of where we were staying. However, if I was to return to Brussels I think this tour would be given a miss as when it finished I still had learned little about the sites apart from where they were located. That afternoon however, was of much more interest as we visited the Belgian Senate. We were given a tour of the building which contains portraits and sculptures of many previous prime ministers and members of the monarchy. We learned the history of the building. It was originally built with the purpose of being an administration building. I would recommend anyone travelling to Brussels to visit the Belgian Senate. The tour is interesting and the staff were friendly and engaging with the whole group. On our final day we visited the Atomium which was built in 1958 for the World Fair in Brussels. However, due to its popularity it was never taken apart as was intended. We were given a guided tour of the Atomium which included a temporary exhibition called “Orange Dreams”. This exhibition was of objects of orange plastic which swept the world during the sixties.

Wednesday rolled around and the main purpose of the trip – which was to visit and learn about the European Parliament. Once we arrived and had passed through security we were brought into a conference room where we were told by our tour guide throughout the tour that a few Irish MEPs will drop in to talk to us. On an average tour a group would meet one or two of the eleven Irish MEPs in the European Parliament as they try to see groups in between meetings. However, luck was with us on this particular day and we met seven of the Irish MEPs: Marian Harkin; Nessa Childers; Matt Carthy; Deirdre Clune; Liadh Ni Riada; Lynn Boylan and Mairead McGuinness, Vice President of the European Parliament. We did see Luke Ming Flanagan in the distance (does that count?). My interest was held throughout the visit as the large number of Irish MEPs gave a number of conflicting opinions on the European Union. I also learned while on this tour that one week a month the whole parliament must travel to Strasbourg, along with all their necessary documents, due to the Treaty of Amsterdam. The Students Council was given the full European Parliament experience, as following a lunch in the Parliament building we were given a tour of the Altiero Spinelli building which houses the MEPs offices. This was a privilege that was not ordinarily granted to groups visiting the parliament. We were shown a café known as the Mickey Mouse bar as a reference to Margaret Thatcher who once called the European Parliament a Mickey Mouse institution. Once we had completed this tour we were given a conference room in which we could discuss issues such as that of TTIP (Transatlantic Trade and Investment Partnership). We were given information on the topic and MEP Lynn Boylan talked to us about it. I found this particularly interesting as even though she had a clear opinion on TTIP she made it clear that that was only her opinion. Our visit to the European Parliament came to a close with our discussions in the conference room. There is no doubt in my mind that the day spent in the European Parliament was the high point of the entire trip. Throughout the day on a group level everyone was engaged in the tour and discussions. While on a personal level I learned a lot and came to the realisation that I had more of an interest in the workings of the European Parliament than I previously thought.

All of this would not have been possible without the support of the Ulster Bank Enablement Fund. Thank you Ulster Bank!

“Will you be voting yes or no in the marriage referendum and why?”