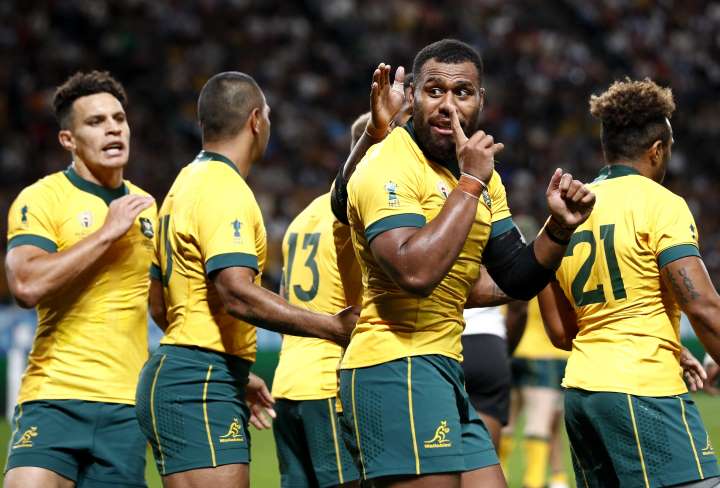 Australia and Fiji kicked off Pool D of the Rugby World Cup (RWC) in the first of Saturday’s three games.

The Wallabies went into this game as favourites but had endured an inconsistent 2019 pre-RWC, only showing flashes of their quality.

The Fijians were confident as usual, performing their traditional Cibi dance with pride.

Australia seemed to start as they meant to go on, kicking deep into Fiji’s half. This was not the story as it turned out – Fiji returned it into Australia’s 22 for an Aussie lineout.

Australia won the lineout but scrum half Nic White was targeted and gave a penalty away, with Volavola converting to put Fiji 3-0 up.

Australia, once again, did their best to get into the game as quick as they can, trying to go wide but failing. A minute later, the Fijians had scored again, courtesy of a Peceli Yato try made by Tuisova’s fantastic run. A missed conversion from Volavola left the score at 8-0 Fiji.

The Wallabies gradually realised the occasion of the game and got into it, skipper, Michael Hooper scoring their first try of the game. Christian Leali’ifano narrowed the deficit to just one with his conversion.

Fiji continued to impose their physical game upon Australia, forcing many errors, leading to the Australians giving away numerous penalties, two of which Fiji chose kick between the posts with, granting them a seven-point lead.

Try-scorer Yato went down with a suspected concussion in between penalties and was replaced for his safety.

Australia soon got a share of the penalties when they were awarded one 40 metres out. Hooper elected to kick for touch and Australia took advantage of this.

The Wallabies won the lineout and pushed up the field, culminating in Reece Hodge getting over the line to bring Australia close once again, Leali’ifano, however, missing the tough conversion attempt.

There was more injury concern for the Fijians as loosehead prop, Campese Ma’afu went down towards the end of the half but seemed okay to continue. Two points separated the teams after the first 40 minutes.

The second half began with a re-enactment of the beginning of the game. Australia started strong again, but a mistake led to a Fijian score, this time in the form of a try from Nayacalevu. Volavola’s conversion gave them a nine-point lead, a surprising position for them to be in.

A change of kickers for the Wallabies as Hodge took over kicking duties, slotting one over to bring the game back inside a converted try.

Australia began to take control, forcing Fiji to twice collapse their maul before driving it all the way to the line for hooker Latu to get over the line. Reece Hodge put the kick wide, but the momentum had switched.

Fiji started to crumble, with Levani Botia heading to the sin bin and Latu’s second try coming directly after, a carbon copy of the first, becoming the first ever hooker to score a World Cup double.

Another missed conversion didn’t worry the Wallabies as the onslaught continued, with outside centre Kerevi getting over the line. Toomua slotted the conversion over and the lead grew.

Five minutes later, replacement fullback, Dane Haylett-Petty opened up space for Koroibete to get over the line, a reward for his efforts throughout. Toomua added two points once again, putting the Wallabies 39-21 up.

Fiji did their best to push for a consolation try but couldn’t find it, even after five extra minutes, ending with David Pocock kicking into touch and ending the game.

Australia will be disappointed with their display, as for the first 60 minutes, they were second best. They should be worried when Wales come to play.

Fiji did what they do best, play exciting and fun rugby. Their defence falls apart too easily, however, and this was their obvious kryptonite. With their lacklustre defence, Fiji will struggle to compete with Wales and Australia in this seemingly straightforward pool.

This game was yet another exciting exhibition of rugby, providing a great undercard for what’s to come today. This RWC is looking to be a truly great showcase of a wonderful sport.