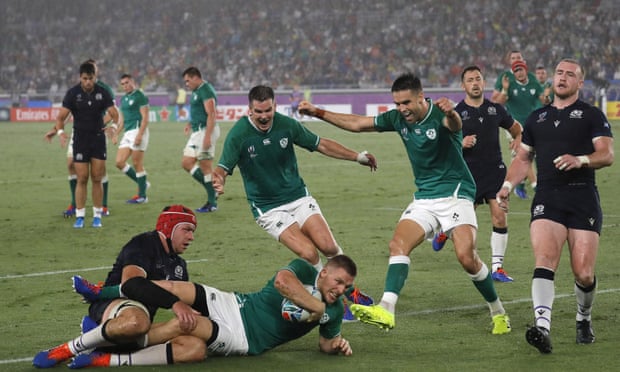 Ireland and Scotland faced off in a possibly very pivotal game in each of their Rugby World Cup (RWC) campaigns this Sunday morning.

A possibly pivotal game, as previously mentioned, this game was highly anticipated by many and a lot was expected from both sides.

The game started off very energetically with Stuart Hogg providing some early Halloween scares for the Irish.

Scotland looked to use the wide channels but Ireland defended well and began to take control. A great run by Iain Henderson paved the way for James Ryan to score. Johnny Sexton added the extra two from underneath the posts and Ireland had a 7-0 lead after seven minutes.

Murray played on and kicked for a lineout after a penalty. The lineout went Ireland’s way and the maul dragged Rory Best over the line to score a controversial try. Sexton missed the conversion but a 12-0 lead after 16 minutes was a dream start for the boys in green.

Scotland posed a threat when Sean Maitland found space for Hogg and Tommy Seymour to run into but the Irish took control of it, albeit giving away a penalty. Greig Laidlaw, such a reliable player for the Scots, had no trouble in converting.

Aki went down injured due to the previous play and was replaced by Munster player, Chris Farrell.

Finn Russell threatened with his kicking, troubling Jacob Stockdale who made a handling error and put Scotland in a great position.

The Irish regained control with pressure and Munster’s Andrew Conway did brilliant to chase down Stuart Hogg and force a 5-metre scrum. Conor Murray and CJ Stander combined to grant Tadhg Furlong the opportunity to get over the line.

Murray converted as Sexton was getting treated, the Munster contingent proving hugely impactful.

Fitness seemed a problem for Ireland as their second change in the first 30 minutes was made when Peter O’Mahony, Munster captain, had to be replaced by Jack Conan.

Possession was almost equal but Ireland’s dominance was clear to see through their use of the ball. CJ Stander broke through the Scottish defence and brought Ireland close once more but the chance was wasted when a penalty was conceded.

Scotland looked to trouble in the 34th minute but Stockdale did well to force a scrum with an attack-stopping tackle. After the following scrum was won, Stockdale gained many metres with his now familiar Garryowen. The counter-ruck, however, stopped Ireland’s move, led by Sam Johnson.

Hamish Watson went down after tackling Conor Murray, who was Ireland’s talisman in the game – a performance his old university will be proud of.

Watson’s RWC is seemingly at an end after he was stretchered off, Fraser Brown, a hooker, the replacement for the openside flanker.

Murray finished the half off by missing a penalty, but Ireland entered the locker room at half time in full control. 19-3 was a well deserved scoreline at the break.

The second half could have started very well for Ireland if it weren’t for a clear push by Conway on Hogg. Scotland began to get into it after this, with Hogg standing out, using kicking tactically.

The ball switched hands often until Murray’s box kick was chased down by Conway. The ball fell to Larmour, who played Conway in for the bonus point try. Murray missed yet another kick, but his influence in the game was still huge.

Ireland continued to dominate after Murray went off, with Chris Farrell standing out amongst the XV on the pitch. An easy kick for Carty, brought along by Chris Farrell, put the lead to 24.

Hogg refused to back down and gained great distances with his runs, one of them resulting in a Tadhg Beirne sin bin. However, Scotland couldn’t capitalise with their penalty.

Scotland kept attacking, although appearing disheartened by the deficit. Ireland soaked up the pressure from the Scotsmen and turned the ball over consistently.

Ireland were happy to see the end of the game out. An emphatic 27-3 win is a great start and puts them in a promising position for a quarter-final match-up with former Munster coach, Rassie Erasmus and his group of re-emerging South Africans.

Scotland, on the other hand, will be extremely disappointed. Completely dominated for the full 80, they now have little chance of avoiding New Zealand if they get through. Russia and Samoa can prove to be easy games but Japan will be tough for both teams.

The Japan match-up will be very crucial for both teams, especially Scotland. If Scotland want to get through, they must beat the hosts. With Matsushima dismantling Russia and Scotland’s porous defence sure to be leaky, Hogg & co. could have a tougher time than many expect.

A fantastic start for the Irishmen, but even more will be needed for bigger matches like South Africa and others. Scotland could have scored if they were more focused and other teams will be. They must take this game as a promising start but they have to keep going.