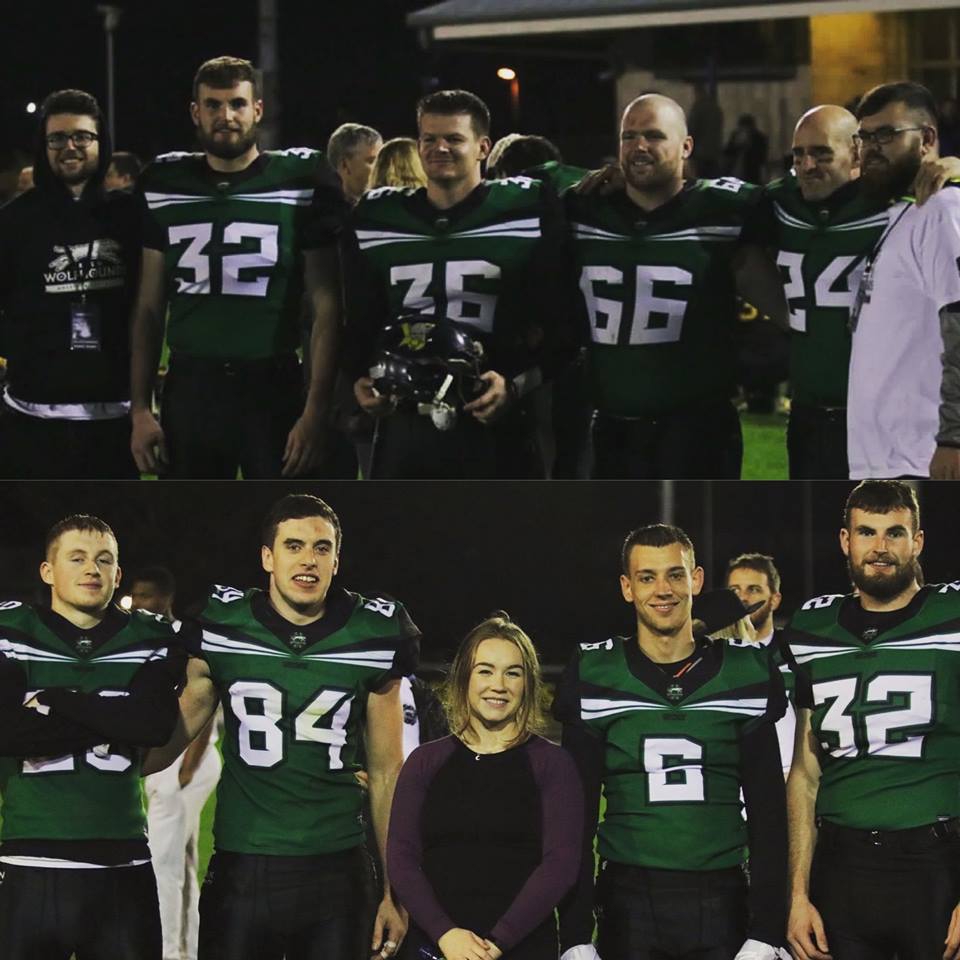 Saturday October 20th saw the Vikings make a TV appearance, where they put former Springbok and Rugby legend Bryan Habana through his paces on Channel 4’s “The Big Tackle”, ahead of Munster’s Champions Cup win over Gloucester at Thomond Park. A number of Vikings got the opportunity to mix with Rugby World Cup winner, putting him in a running back position for both British and Irish viewers to see, in a much-enjoyed TV slot and a fantastic way for the UL college side to get themselves on National TV in both Ireland and the United Kingdom.

But that was just the beginning of the Vikings Saturday, as four of their team played their part on a special evening for the Irish International team (The Wolfhounds) in Navan, County Meath.

The returns of the Wolfhounds after a two year break was of no surprise to people involved in American Football in this country. Ireland has 20 teams from all four provinces across two divisions in a very competitive league. With the NFL only getting more popular this side of the pond, and participation numbers of the Sport in Ireland is only rising, and the revival of a National team made up of the best players from the Irish American Football League was long overdue.

Lead by head coach Ciaran O’Sullivan; the Wolfhounds welcomed the Belgium Barbarians to Navan RFC where the Irish side beat the Belgians 20-19. It was a historic night as mentioned because it would be Irelands first ever international victory in their history. Ireland had a total of 45 players from their roster which included the quartet of Sean Sheehy, Finn Kearns, Richie Cronin and Adrian Garvey, who all play for the UL Vikings Senior team.

Irelands last international fixture came in 2016 in the Netherlands where they lost to the Dutch Lions. This long-awaited return to the international stage for Ireland had them as underdogs against a very experienced Barbarians side in Navan.

As the game kicked off it was the Belgian outfit that started the quicker of the two teams, quarterback Tomasz Firszt left the pocket on the 4th down and rushed in from just 5 yards.

However, the conversion attempt was missed leaving the Barbarians with an early 6-0 lead.

With Belgium drawing first blood in this game, it only meant that Ireland had to strike back and excellent running from both Chris Carson and Simon Mackey drove Ireland back into Belgium territory. Unfortunately for Ireland, consecutive interceptions would give the ball back to the visitors.

Things continued to go in Belgium’s favour as Barbarians Defensive back Hadrien Godichal returned one of those interceptions and stretched their lead out to 13-0. Ireland may not have played on an international stage in two years, but the last thing they wanted, was for this game get away from them early on against the more experienced team.

So, they found their way back into the game as quarterback Andrew Dennehy went down the sideline and found receiver Sean Goldrick for their first touchdown of the game.

After the break, Ireland continued to build on the momentum from Goldrick’s touchdown and the second interception from Defensive Back Alex Kusmirek applied further pressure on Belgium’s offence. Irelands high work rate cracked the Belgian code, and Dennehy once again found Goldrick in the corner of the end-zone, kicker Marty Caskey added the extra point with the boot, and the game was tied 13-13.

A missed field goal attempt from Belgium gave the Wolfhounds an opportunity to regain the form they had from earlier in the game and running back Pete McMahon dodge several tacklers to reach the end zone, giving Ireland the lead in the 4th quarter.

There was more drama to unfold in that 4th quarter when the Barbarians closed the gap on Ireland when Firszt found receiver Thomas Bouron for a late 4th down try. The Belgians had options now, and rather than opting to tie the game they decided to go for two to win.

In what was a nail-biting finish for Irish American Football fans, the Wolfhounds defence stood strong and firm to stop the Barbarians doing further damage to the scoreboard to clinch the victory. It was the Wolfhounds Neil Graham who managed to recover the onside kick that sealed a historic first for Ireland in thrilling fashion. The final score in end, 20-19.

For a team that had not played an International game in over two years, this was an exceptional night for all involved in Irish American Football and an excellent showcase for the Irish American Football League too. As for the UL Vikings, it’s turned out to be a super Saturday as a whole and a proud moment for the club to have a number of their players represent their country on a historic night.

Enjoy Sport? Tune into “Beyond The Game” on ULFM every Friday from 1-2pm, for the latest Sports news, views and updates.

Letter to The Editor: From A Disappointed Feminist