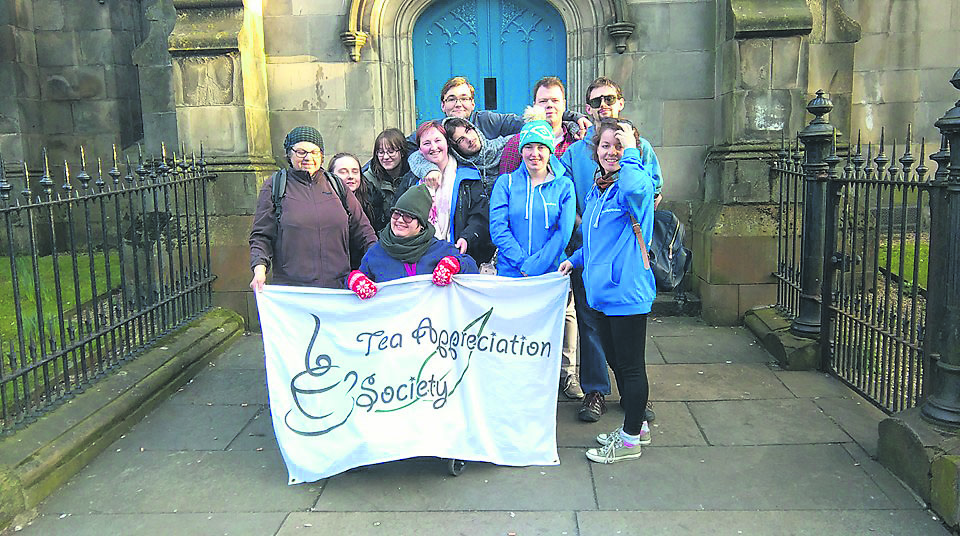 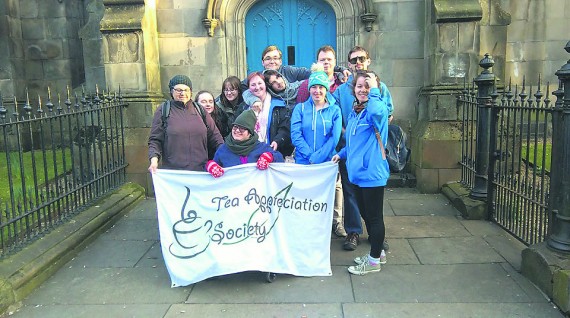 By Rachel West and Aaron Young

On the 18th of March, 12 very excited members of UL’s best society met each other in Dublin Airport. We had all gathered to do something very special; to take Scotland by storm. Months of planning had gone in to putting together the Tea Appreciation society’s first ever trip abroad.

After a long day of college, we all piled into busses and trains for the first part of our Scotland trip; the dreaded journey to Terminal 1. After arriving in Edinburgh, we started as we meant to go one, celebrating arriving in one piece the only way we knew how; with a nice warm cup of tea in the Airport, armed with selfie sticks (just for proof we made it!). Equipped with tourist maps, the Tea Soc flag and the world’s most confusing currency, we made our way to the hostel almost flawlessly.

The hostel staff (in particular, Ed! Shout-out to Ed if he manages to get his hands on this somehow) were amazing. They provided some of the friendliest service any of us have ever received. They were helpful, delightful and went out of their way to ensure the comfort of all of our members.

We all woke up bright and early, got breakfast in the hostel and set off to the Scott Monument, where we made sure to get photos of the society with our flag, as well as the bench the Edinburgh Beatles Appreciation Society had dedicated to John Lennon. For certain committee members, it was a complete and utter fangirl moment. Afterwards, we went to the Cathedral and did blatantly touristy stuff, simply because we could. (Yes, we got a picture of a telephone booth too, because without it, we couldn’t claim to be as touristy as we made ourselves out to be!). Some of our committee then sat down and got tea in the National Museum, while everyone had fun exploring all the exhibits that the museum had to offer. This museum was also the Lego museum, so we all spent time feeling nostalgic about our childhood memories and cringing as we remembered how it felt to stand on Lego. We also found some leaflets in the museum in Gaelic, so five of our six committee members relished the similarities between Gaelic and Irish, and felt a small sense of pride in knowing we could understand it. Later that night, we also started speaking as Gaeilge and it just escalated from there and became a regular occurrence for the rest of our trip.

Afterwards, we found a cafe named Chattime which sold something called bubble tea. There was definitely mixed reactions to this, and we’re still not entirely sure if people enjoyed it or not. But, it was definitely an experience to say the least. The gallery blew our minds with its stunning landscape paintings and made some of us realise that, in comparison, our stick man drawings were top quality. That night, we all went to the Elephant House (The cafe where J.K Rowling wrote the Harry Potter) and released the Potterhead in all of us. We each signed the wall in the bathroom with our favourite quote. This was definitely an emotional experience for some of us as Harry Potter was such a huge part of all of our childhoods.

Day 3: Walking up hills is not fun…

We managed to have a little bit of a lie in, and then have some fun. We split into groups and went on a Treasure Hunt. Our Treasure Hunt consisted of Edinburgh’s Tea Scene and all the historical things that we could find, from the Sir Walter Scott Tea Rooms to Tiger Tea, and from Tron Kirk to Greyfriar’s Bobby; We saw it all. The people of Edinburgh must have been sick of us as we took at least five billion photos, minimum. We imagine that all that ran through their minds was: “Look at those tourists being tourists. Damn Irish people and their selfies!”

None of us realised just how beautiful Edinburgh was until we went the Castle that evening. The view from the hilltop was spectacular. We couldn’t get over just how pretty a city Edinburgh was until the Castle outdid all our original expectations. Our resident expert in all things British, Rob Cross, to his great annoyance, deduced from the flags that her majesty was not in residence by lack of royal standard flying above the keep. His disappointment lasted for days, and his scowl was matched only by those of Robert the Bruce (Same first name…Coincidence?) and William Wallace glaring from either side of the Castle Gates. The Castle definitely lived up to our expectations, even if the city decided that it wasn’t worth any of us having functioning legs by the time we got home… On the bright side, we all bonded over one thing; the ache of climbing that mental hill, and also, from steps. Nobody likes stairs. Moving swiftly along, we got a photo in front of the Castle and then went and got the world’s greatest quesadillas.

That night was an early one for all of us as we had to be up at the crack of dawn, as we were heading to Glasgow.

We scrambled for the train, queueing, waiting, trying and failing to count currency at some ridiculous hour of the morning that some of us would refer to as “Stupid O’clock” (By “some of us” we mean Rachel). Shortly after our arrival in Glasgow, after being approached by a guy selling Monk Rock Music CDs (Yes, that’s a thing!), we found the Tardis. Needless to say, the Whovian’s were ecstatic. We found our way to first coffee house we could find (We’re Tea Soc we swear!) and drank ourselves awake from sheer caffeine intake. This was followed by the Art Gallery, in which we were all feeling very cultured and picked up books on Art and Science, as we worked our way through an exhibition of modern art and feminism, entirely by female artists. It wasn’t everybody’s cup of tea, but was nonetheless there was something there for everybody, including tea infusers in the shape of Her Majesty Herself (Needless to say, Mr. Cross, was delighted).

Gregg’s for lunch, need I say more? The pasties were the best you could get outside of Cornwall, no lie. It’s cheap, it’s warm, it’s food, and it’s just too good for life. We all sat and ate lunch in St. George’s Square, where we were greeted by competitors from the Irish Dancing World Championships. Some of us were happy, some of us were curious, and one of us was sad that she wasn’t competing against them… but then she got tea and calmed down.

After that, we split up to find as much tea as we could, and challenged ourselves to find Forbidden Planet. One of the groups managed to find a tea Room called Cup Tea, and found what was called the “Scottish Tea Cake”, which was a honey cup cake with rooibos flavoured icing and sugared fig. Their menus also had many quotes and an overall favourite was “Money can’t buy you happiness, but it can buy you Tea, and that’s sort of the same thing”. Our new mascot enjoyed this trip just as much as we did. His name is Tea Towel, and he’s the Tea Soc Owl.

The other group got yet more coffee in costa and had a fascinating discussion on Nordic royalty even finding that one of our own members had an unexpected connection to the Norwegian queen. An adventure was then had to track down the mystical Forbidden Planet tucked away in a small corner. We could have spent hours lost in the tightly packed shelves of comic books, books, and merchandise, but were taken by a sudden desire to visit Waterstones. The bookshop was spread over three floors of literature and history from around the world were we confused our Norwegian member (and ourselves if truth be told) with a book of Scots poetry.

After we had all met up again in George’s Square we took a walk along the river side, to the Cathedral. The river was beautiful and blue, and it offered us a great background for some of our photos. When we got to the Cathedral, we were greeted by a fountain outside. We all went inside, and whether we were religious or not, took a moment to reflect on our lives and just be quiet for a few minutes. This was a very emotional experience for some of us, but we gathered our thoughts and went to the park. The park was huge, and we met so many cute dogs while lying on benches and trying not to fall asleep. It was a very long day, with lots of walking, lots of sign reading and wondering if we were going the right way.

We went to Nando’s after a long day, and couldn’t thing of a better place to get food (Except maybe Greggs!). We enjoyed our food, had a laugh, lost track of time and rushed for the train. On the way back on the train, many of our committee slept while some of us recounted our life’s story… We were wrecked, aching, and trying our best to be nice and share our snacks. We went back to the hostel, acquired a Hat from Ed, said our goodbyes to him, and went to bed, prepared for the long journey back to our homeland, where we finished just as we started, with a cup of tea in Dublin Airport.

We got back to Dublin on Tuesday evening, having lost nobody and all in one piece. We said our goodbyes, counted the amount of selfies taken, and went our separate ways on our journey to wherever we were staying.

This trip was truly the greatest Tea Soc event to date, and will be hard to compete with the fun and friendship that was had on this journey. We made friends with people who we may not have known properly prior to this trip, and became closer to those who we did know. We will be forever grateful that we had the opportunity to go on this trip, and we will have memories that we will keep with us forever. Tea Soc is more than a society, it’s a family, and we proved this in Scotland. While we were happy to be coming home to see our families, it was heart-breaking having to go our separate ways even after only five days. We will definitely have to go back again next year, to make even more memories with even more people, and drink even more tea. There’s two questions left to ask…to tea or to Scotland? Or both?

A flurry of activity at Animal Welfare Society