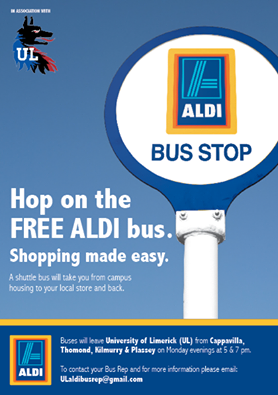 The Aldi Bus service began in week seven and is set to continue on two routes every Monday evening until the second week of May.

The bus has two routes, the first is Killmurray and Plassey, the second route is Dromroe, Thomond and Cappavilla.

Students Union Welfare Officer Shane McCormack organised this service for students by working with Sligo IT where the idea originated, he said:

“The bus service is completely free, anyone can hop on, you don’t have to live on campus at all, you just need to email the UL Aldi Bus Rep, book your spot and even if you don’t you can show up and if there are spaces available you can get on.”

ULSU will be putting reminders on Facebook every Thursday as you need to book your spot weekly.

“They have allocated stops for the bus so it’s safe, the students will be signed on by reps and they will make sure everyone is on again after they are finished their shopping.

That’s going to continue on until the second week of May, it is a solid trial run and depending on how the rest of the semester goes, it’ll be there again next semester.”

This service does not cost the students anything as the cost is covered by Aldi.

The Aldi Bus service has replaced an existing service called “College Dinners” which was brought in in the beginning of September.

When they came to UL the same arrangement wasn’t able to be put in place because the accommodation office is already advertising meal plans.

It was unfortunate but they decided that they would stick with their original marketing which to us didn’t seem like it would target the wider student body.”

Unfortunately the service did not receive the same response as it did in UCC and died out. However the service was a very good one:

“You got your weeks dinners for 12 euro so that’s three euro per day and you got all your meat, all fresh veg all fresh everything, the meat was vacuum packed, they were proper dinners and because of the marketing they didn’t get enough pick up.

They had to cease operating here on campus and stopped at the end of February.

The reps from College Dinner contacted the students and said sorry we won’t be able to operate beyond this date, and the students were disappointed with that but we will be re-evaluating that in the lead up to June for possible re-launch next September.”

The two services were in competition but the Aldi Bus has proved to be “more than sufficient” for students:

Speaking with the Accommodation Office, it was reported that students were walking 20 minutes to go to Aldi for their shopping and then getting a taxi back, whereas now they can get transport to and from Aldi for free every Monday at five and seven o’ clock.”