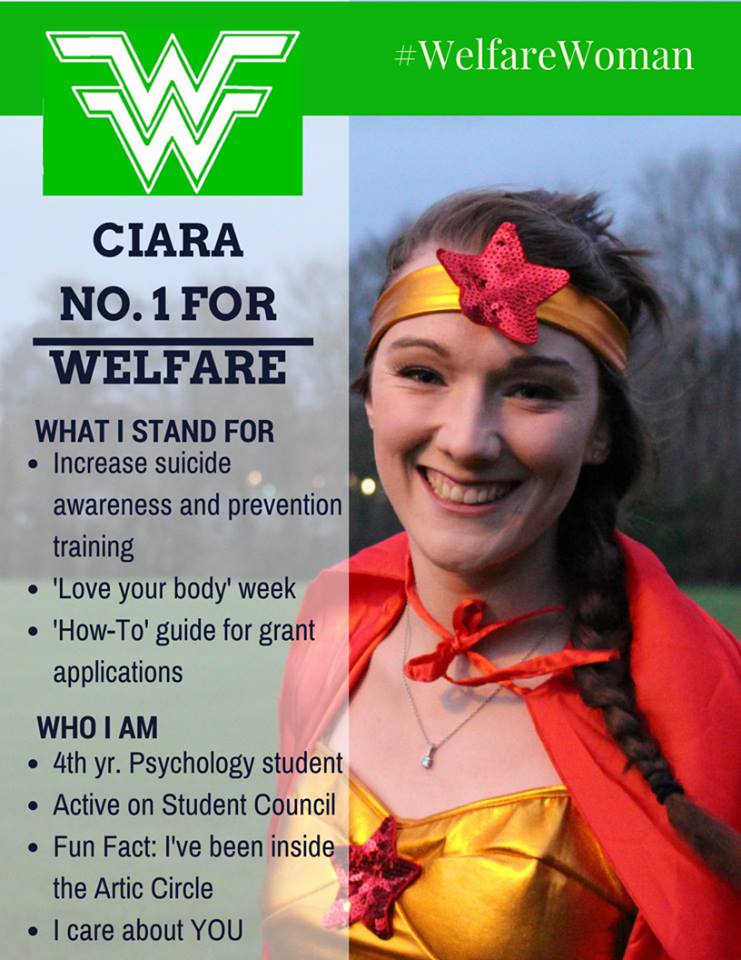 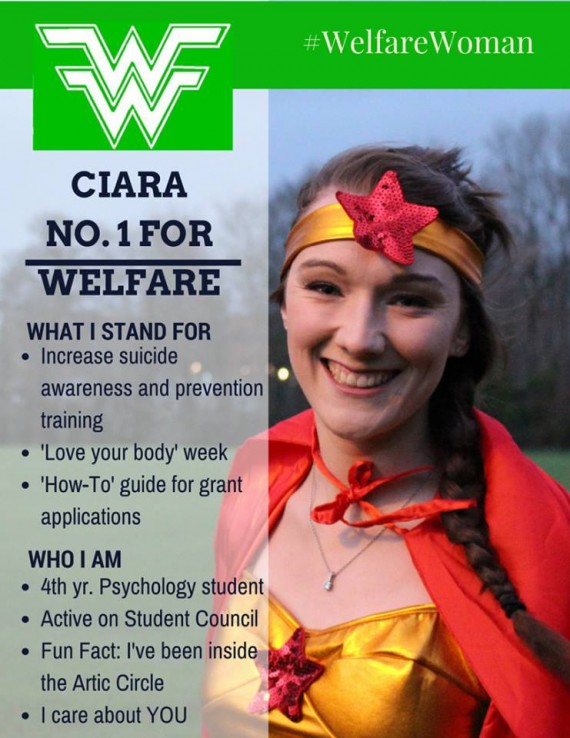 Speaking on the night of the election results Ciara said:

“I genuinely can’t believe it; the two girls ran such a strong campaign. It still hasn’t sunk in; I don’t think it will sink in until June when my face goes on that door. I’d just like to say thanks to my campaign team they were fantastic I really don’t know what I would have done without them. I don’t want to sound cliché but I love UL, I never want to leave it! The first thing I’ll have to start working on is the grant guide because that needs to be up and running as soon as possible for people applying, that will have to be the start and then onwards and upwards”.

Ciara’s manifesto promises to raise suicide awareness and work on suicide prevention for UL students, a ‘Love Your Body’ week, and the creation of a ‘How-To’ guide for grant applications.

A huge issue that was discussed for all candidates is the task of incorporating the North campus in the events, welfare and academic sectors.

Speaking on ULFM Ciara said: “I think it’s so beautiful over there and we definitely don’t utilise it enough. I know it’s much smaller over there and maybe the majority of people are here but I think we definitely need to utilise it more. I know Vanessa had a fantastic idea of having some office hours for the Welfare Officer over there so I’m definitely going to try to work with Vanessa on that. You don’t really know what’s going on over there, I spoke to some dance students during the week and they said that they only have an hour off during the whole day so they don’t have time to come over here to talk to any of us.”

A campaign that Ciara is passionate about running is a ‘Love Your Body’ Week where issues surrounding body image and pressure put on young people will be targeted:

“It’s something that I think is a real issue that needs to be addressed, it’s something that is on Facebook all the time, and it is everywhere. I find especially when you’re going out, you’re in your room and you have your make up done and you’re in your dress and you’re like “I am fab, I am great” and then you walk out into the kitchen and there’s loads of other people and you’re like “oh…okay”.

It’s not going to be one week and we all magically love ourselves but it is something we can raise awareness about, it can be a starting point and we can build from that. I think it’s something that is so important and it’s just not talked about. It’s kind of like mental health stigma that’s just not talked about either. With mental health it is slowly but surely coming along, so I just hope that this will start it off at a week and see how things go. It’s something I really believe in and I find it really interesting and it’s really important to me. I don’t think one week is going to solve the world of problems but if it is a start and if this campaign helps even one person I think it will definitely be worth it.”

Ciara’s term as ULSU Welfare Officer will begin on June 1, 2015.