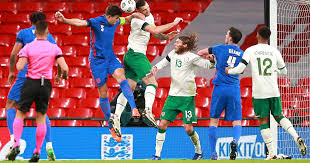 Gareth Southgate can be pleased with his side’s performance – he probably knows that it was the easiest challenge they had faced in a while.

Despite impressing in the early stages Ireland couldn’t make their play count. A Daryl Horgan ball went fizzing across the goal, watched by defenders and strikers alike.

Harry Maguire and England struck first after poor defending from Christie and Duffy allowed the Manchester United captain to glance it home.

Jadon Sancho found the bottom corner after Jeff Hendrick failed to close him down on the half-hour mark.

The Dortmund winger twisted the Irish players inside and out over the course of the game and will be happy with his contribution.

Cyrus Christie gave away a penalty ten minutes into the second half. Bakayo Saka pushed the ball ahead of him and Christie clipped him needlessly, allowing England to extend their lead.

Calvert-Lewin, who is enjoying his most prolific season in football so far duly dispatched the spot-kick into the top corner, leaving Darren Randolph no chance.

In truth, it could have been worse.

Grealish came close at the start of the second half. Maitland-Niles could have done damage had he not miscued his pass. Harry Maguire threw his head at anything that moved in the opposition box and could have had another one or two goals.

The only time that Ireland looked any bit dangerous came when Kenny made multiple substitutions.

Ronan Curtis forced a save from Dean Henderson in the England net and Jason Molumby galloped forward. However, even the fresh legs were soon weighed down by the gulf in class between the two sides.

Ireland played sidewards and backwards while England pressed them back. Any forward pass was intercepted or overcooked and our tired defence was tested once again.

Gareth Southgate will be happy to be the first England manager in 35 years to beat the Republic of Ireland in a football match.

Ireland hasn’t beaten the Old Enemy since 1988. Big Jack and his Ireland side may have lacked the quality and squad depth that England possessed then, too, but they always looked like they could nick a win.

Stephen Kenny’s side tonight, unfortunately, look like they would ask each team politely if they might grab a goal and oblige if they refused.

I still think that Stephen Kenny will be a success in an Irish dugout. Injuries, transition and Covid have ravaged his squad.

The gulf war was fought and won in Wembley.