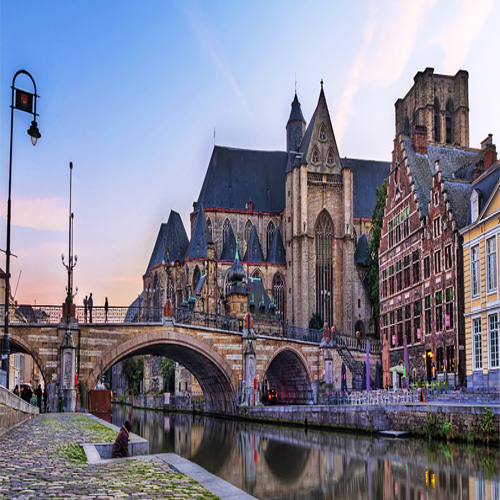 I have been living in Gent, Belgium for just over two and a half weeks now. But it feels like I have lived here forever.

Funny as I barely have two sentences of Dutch to my name. I haven’t yet tired of exploring the seemingly never ending nooks and crannies of Gent.

Each day we come across a new church to explore, another street with intricately designated windows.

There is a castle called Gravensteen from the 10th century a thirty- minute walk away. I have never lived in a city before and life is fast paced and exciting. No day is the same.

No day is the same.

Every weekend, my friends and I hop on a train to a new city in Belgium and I see new sights that I could have never conjured up with my own mind.

My classes in Ghent University started on the 29th of September and I have resumed life as a student having had a break from lectures for nine whole months.

My love of learning has increased but let’s just say my ability to stay focused for the duration of three-hour lectures has not.

I find myself amazed by Belgian students’ eagerness and dedication to learning the English language.

A Belgian girl I met here only reads books in English and has done so for more than two years.

I hadn’t realized how immersed Belgians are in English language books, film and culture. Their determination to master a language used all over the world is admirable and inspires me to be open up to other languages.

Here, Belgians pride themselves on speaking more than one language and speak three at the very least. Dutch, Flemish, French, and English are commonly spoken in Gent.

As an Erasmus student, it makes me very determined to immerse myself in all things Belgian, to open my mind to a culture that is now all around me.

Through speaking to locals I discovered the role that Belgium played in World War II, something I had not previously known.

I now know why so many cafes in this fair city have nooses in their logos, an ode to their colourful past.

I have long lost count how many bikes I have seen streaking past me, multiple ones a minute.

It’s not the fear of being hit by cars in this busy city or the trams that I have. I have a genuine fear of being mowed down by a Belgian furiously pedaling through the streets. I don’t even want to know what their leg muscles look like.

These people will look at the steepest hill and fly up it, not batting an eyelid, whereas even the sight of a hill makes me sweat.

I shiver at the thought of my friends’ and I’s first day in Belgium, dragging suitcases on and off trains, up hills, trying to avoid the bicycles.

Doing all of that while being awake for over 36 hours without sleep. It was a nightmare. It’s safe to say however that I am adapting to this new life of mine.

The architecture is ancient, enormous and I have taken more than three hundred photos in two weeks. I want to document it all, to show the people at home what they are missing out on.

While writing this I was lying in my room on the fourth floor of House Uppsala, student accommodation.

I thought to myself, here you are! You are actually living in Belgium.

I remember I could hear voices of young Belgian men chattering, laughing and calling out to each other in a language that I do not understand.

I found myself smiling because it is a great thing to experience something so different to what you are used to and also it’s a gift to see young people doing what they do best, having fun.

When I moved to America for my J1 I was surprised at how patriotic I became.

Even more patriotic than I already had been. There is an Irish pub called Porters just five minutes from where I live.

Even though I am hours away from my small country, its big flags hang out the pub’s windows, its a little piece of home during this Erasmus experience.

During past two and a half weeks in Belgium, Erasmus has been a whirlwind of parties, new subjects, new people and multiple nationalities.

While I am so excited to embrace life as an Erasmus student, every time I pass those tricolour flags I get a little twinge of pride. Irish born, and always will be!