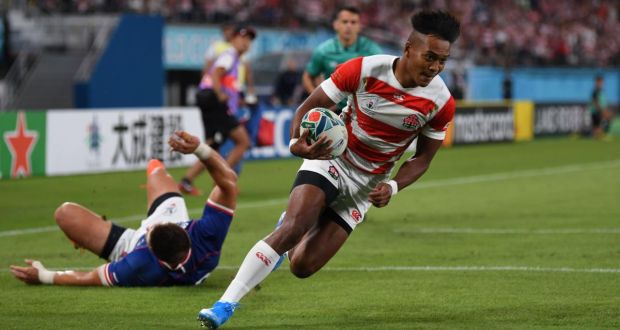 The 2019 Rugby World Cup (RWC) kicked off today with the opening match-up of hosts Japan taking on Russia in Pool A.

A lot of tries were expected in this game, with Japan being thought of as clear favourites.

Not a lot was considered of Russia after their heavy defeats at the hands of Italy and Connacht in the run-up to the tournament.

Their efforts led to a try after four minutes when winger Golosnitskiy took advantage of a mistake from Japanese fullback Willie Tupou to score the fastest first RWC try.

Kushnarev furthered the lead to seven with his conversion.

Japan used this mistake as a wake-up call and struck back quickly with Matsushima getting over the Russian line in the eleventh minute, bringing the deficit back to two points.

No scores followed immediately but the game still entertained with flashy footwork from Japan’s fly-half Tamura and some solid counter-attacking from the Russians.

The game moved from 22 to 22 with the Russians keeping a solid grip on their lead, mainly due to Japan’s lack of grip on the ball, consistently dropping it when trying to get an attack together.

Russian scrum-half Dorofeev was taken off for a head injury assessment in the thirty-first minute, and this gave Japan the chance to catch the Russian’s off guard.

The Cherry Blossom’s seemed to take this chance when Matsushima crossed the line once more in the thirty-fourth minute.

However, it was ruled out by the TMO for a knock-on, influenced by Russian captain Artemyev’s try-saving tackle.

Matsushima got over the line once again with two minutes left in half, with no need for TMO this time. Tamura converted this time to put Japan five points in front at 12-7 heading into half-time.

Japan carried their form into the second half, winning a penalty in the Russian 22 with Tamura converting and furthering their lead to eight.

Japan furthered their lead once more a few minutes later when openside flanker Labuschagne ripped the ball out of Ostrikov’s hands and carried it all the way to the try line. Tamura, for the second time, missed the conversion.

Russia refused to give up, with great kicking from Kushnarev, including a huge clearance and a penalty to bring the game back within 10 points. Openside flanker Tagir Gadzhiev also impressing for the Russians.

Tamura slotted a tough penalty between the posts with 15 minutes to go. The quality strike reminded everyone of his stellar kicking form pre-RWC, which hasn’t been on show with every kick today.

Matsushima completed his hat-trick on 68 minutes for the bonus point after Artemyev’s atrocious return kick granted Japan the opportunity. Tamura converted yet again, giving the hosts a 20-point lead.

The Russians tried their best to salvage their performance with a late consolation try, but it wasn’t to be.

With a four-try bonus point and a 30-10 win in their opening game, the Japanese fans left happy, although their overall performance was below par, much to the delight of fans of the other Pool A nations.

The Russians will be disappointed as their defending let them down in what could have been the perfect start. With this loss, and upcoming games against Scotland and Ireland still to come, the Russians will have a tough time trying to get out of Pool A.

The game was an entertaining opener for this year’s RWC, and fans will be even more excited for the month ahead after watching it.