“It is easier to discredit a failed degree down to back-lash towards a street party rather down to lacking the ability to succeed third-level education.” 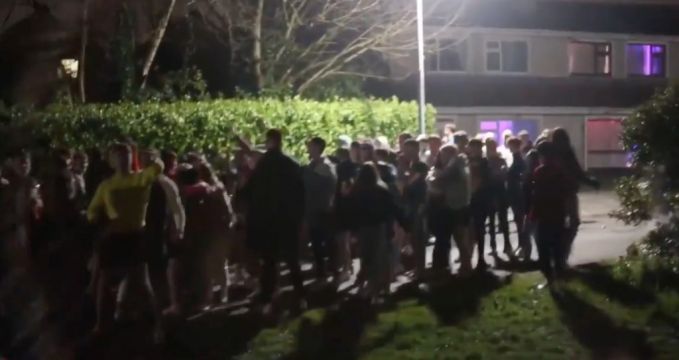 For most UL students, social media was where we watched the antics unfold. Most of us haven’t set foot on campus since March and have spent the last year grappling with online college, isolated from our peers with little support.

Despite having held up frontline services such as supermarkets and hospitals for the past year, students are still pinned as super-spreaders of the virus and the videos emerging from last night validated the idea rather than challenged it.

Last week, all UL students received an email emphasising the devastating impacts of Covid-19 alongside the news of increasing Garda patrol and fines for anyone found breaching guidelines.

This paired with the unanimous disapproval for the Dublin riot on Saturday makes the College Court drama appear not just as a street party, but an organised affair.

There were even fireworks there to mirror Saturday’s protest that saw 23 arrested and widespread disapproval.

Yesterday’s videos uploaded on public Snap Maps and Instagram stories mean the event was organised to generate backlash, but why?

Even before the pandemic, there’s an air of desperation that comes with University.

Going to third level is seen as a rite of passage by many, with the promise of brilliant parties and enduring friendships.

This pandemic has stripped a degree course back to its very foundations. Now, all that remains is a challenging academic core.

For the last years of secondary school, the emphasis is on getting the points for a degree, with little thought given to whether or not you have the academic stamina to complete it.

Getting into college is the easiest part. I’m not discrediting the Leaving Cert, but in a system steeped in grinds, past papers and tutorial colleges, the effort to get into a course rarely meets the challenging academics required to succeed in it.

Most of last night’s attendees had pre-empted the consequences that would occur.

Suspensions and expulsions were a given, and that was the driving force behind it.

It is easier to discredit a failed degree down to back-lash towards a street party rather than down to lacking the ability to succeed in third-level education.

This desperation and anger is no new feeling for University students. However, this academic year has made all anxieties more acute, with students thrown in with new hurdles with little to no support.

The fact it took a street party to stir a response from the Minister for Further and Higher Education after months of skirting around the real issues only added fuel to the fire.

Now that Minister Harris has addressed the minority, will he now look at the widespread issues facing students?

What about the students caught up in rental agreements they made under the pretence of having some in-person lectures that never materialised?

What about the students who have inadequate software to meet the requirements of their now fully digital degree?

What about the students who contracted Covid-19 and endangered their families while working in a frontline job on a sub-par minimum wage?

With the first Minister of Higher Education having dropped out of college himself, will he look at the issues that cause such resentment that in extreme cases, leads to an organised outburst like last night?

The only hope for the majority is that this case study in College Court might finally bring deeper problems third level students are facing to the focus, now that Simon Harris has finally realised what he is the Minister for.

And as for the offenders, any consequences of their reckless actions will be exactly what they were looking for all along.