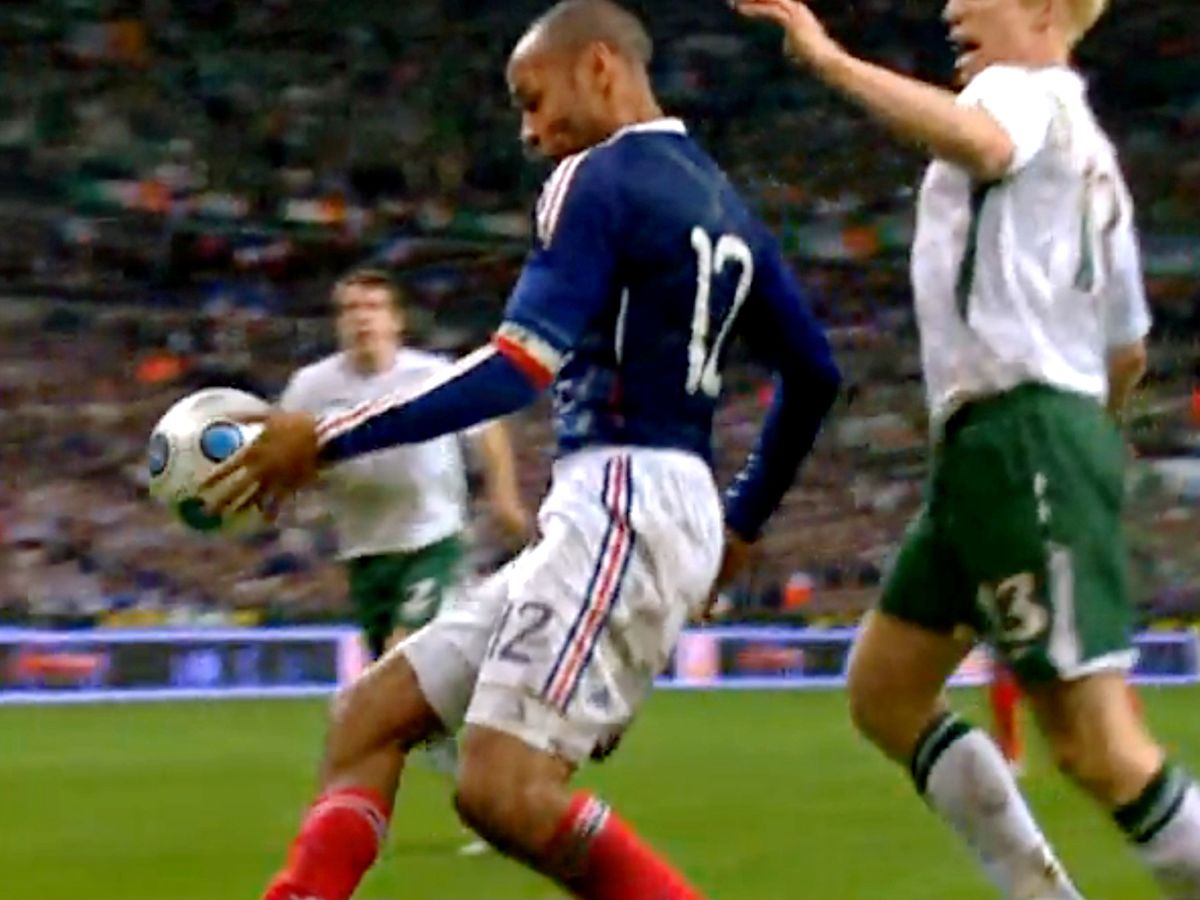 Reigning World Cup runners-up France and two-time competition entrants Ireland are duking it out in the European qualifiers.

France, after a torrid Euro 2008 and a spotty qualification campaign that led to them finishing behind Serbia, are forced to a play-off with an unbeaten Ireland, who have managed to hold reigning World Cup champions Italy to a draw home and away.

The French take a crucial Nicolas Anelka away goal with them to Stade De France, their bespoke stadium built for their triumphant 1998 World Cup campaign on home soil.

Irish talisman Robbie Keane levels the score on the 33rd minute to bring the tie level.

Over the next hour, Ireland and their Gallic counterparts grind out a tetchy and nervy affair; typical Trappatoni tactics.

The ball bounces out of reach of defender Paul McShane, and the Barcelona player controls the ball not once, but twice with his hand to stop the ball going out of play.

He controls the ball to his right foot, finding the head of the offside centre-back William Gallas, who heads it into the Irish net.

The players swarm Swedish referee Martin Hansson, but to no avail. 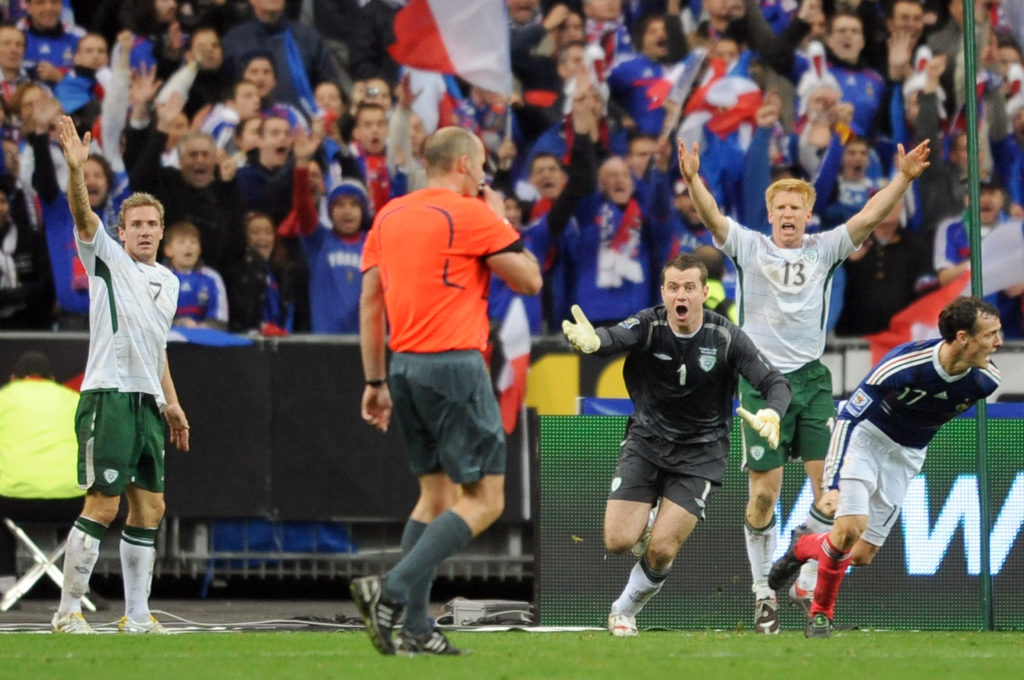 The goal stands, and Ireland are unable to find a winning away goal.

France go through to the 2010 World Cup Finals in South Africa at Ireland’s expense.

This is the second time in a row the French have stopped Ireland from qualifying at the World Cup at the final hurdle.

In September 2005, a Thierry Henry goal at Lansdowne Road condemned Ireland to their only defeat in the 2006 World Cup Qualification campaign, meaning the Boys In Green and their Golden Generation of Duff, Keane, Given Dunne and the rest of the Brian Kerr’s men stayed at home while the French swaggered to the controversy-laden Berlin final.

The full-time whistle goes, but the story doesn’t end there.

Giovanni Trappatoni is reported to have screamed in his trademark broken English “It has been a fucking murder!” and Shay Given described the dressing room in the bowels of the Stade De France as ““carnage … as angry a dressing-room as I’ve ever been in”.

With 10 years of hindsight, it is easy to paint Ireland as this helpless victim that was served a great injustice, but the fact of the matter is Ireland never had a chance of getting the result overturned.

Sepp Blatter was as grossly incompetent at his job as Shay Given was a good goalkeeper, and his behaviour towards Ireland after the relatively innocent, albiet idealistic, request to be admitted as the 33rd team told you everything you needed to know about the man who was brought down on corruption charges in 2015. 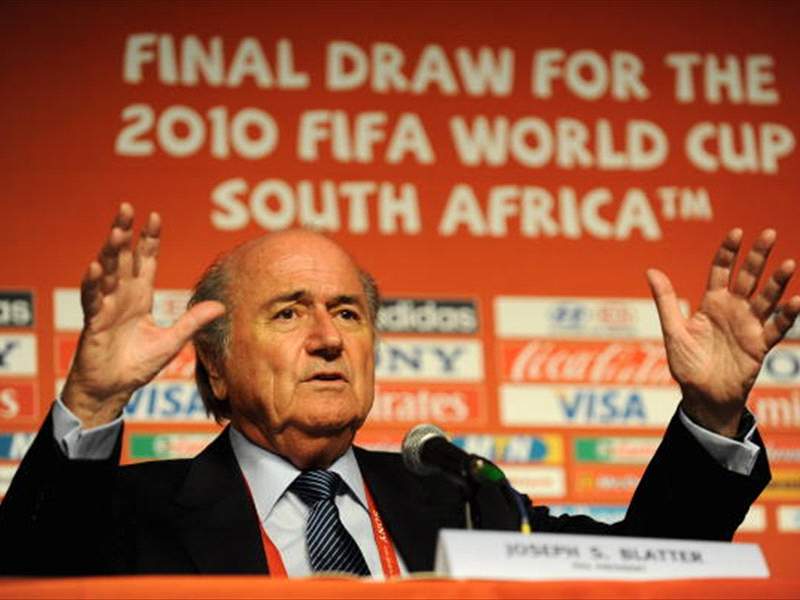 A common solution in the immediate aftermath was a call to replay the game from the time before the goal was scored, rewriting history and striking William Gallas’ 4th international goal from the record books.

If that sounds ludicrous and idealistic, Real Madrid played the remaining 6 minutes of an abandoned match in January 2005 and ended up winning.

Granted, the circumstances are different (however you may feel about Henry, the Madrid game was called off because of a bomb threat) but this was not happening as long as Sepp Blatter was calling the shots at the games highest level.

More qualified and informed writers have written about the failings of Sepp Blatter as the President of FIFA, but the blame lies squarely at the referee.

“The incident could never happen now,” in the light of VAR and it’s arrival into the football world.

“Not just because of VAR but also because, within half a year, they appointed the additional assistant referees behind the goals. It was (the Henry incident) that meant them starting that project.”

“Of course, if we had the technology in place back then it would have been better for everyone. But what I would really like to ask is: where is the discussion about players cheating?

“It’s not a very big discussion, is it? If the referee makes a mistake, the television company wants to speak to the referee to ask what happened. The referee has to come out and say, ‘Oh, it was a big mistake, I thought it was a penalty and I was wrong.’ Or in my case, that I couldn’t see the handball because I was blocked from the player.”

The Athletic piece is a fantastic piece, a shining example of sports journalism, but let’s bring it back to the Irish perspective.

Ireland sweated and grinded out results under Giovanni Trappatoni.

An unbeaten World Cup qualification campaign is nothing to be sniffed at.

Ireland were an Alberto Gilardino 89th minute equaliser away from going through as group champions, and indeed the game could have been a rematch of the 2006 World Cup Final between Italy and France for the final play-off game.

2010 was the last chance saloon for the majority for our 1998 UEFA U-19 European Championship winners to line out for their country on the biggest stage of them all, and it was taken away in a moment of disgrace.

It’s easy now to discuss what could have been, but one can’t help but feel this set Ireland on a downward path it arguably never has recovered from.

As Croatia showed last year, success on the pitch can distract from issues off the pitch, but Ireland failing to qualify for 4 straight World Cup tournaments leaves a bitter sting for many an Irish fan, especially as the likes of Uruguay, New Zealand, Iceland and Croatia with their equivalent populations pulling off miracles in the tournaments.

If the story has a happy ending, it’s the French mutiny at the 2010 World Cup.

In one of the great World Cup scandals, the players sensationally went on strike against manager Raymond Domenech over his treatment of star player Nicolas Anelka, and were sent packing by Mexico and Uruguay at the group stage.

Of course, that set back was more beneficial for French football in the long run, as last summer’s Russia triumph showed, as the demons of 2010 laid the foundation for a new golden generation and reform within the French FA.

Two European Championships, some glorious nights against Italy, Germany, and Wales were some highlights of the post-Paris era, but the allegations leveled against John Delaney and the apparent corruption within the FAI, a stadium that rarely sells out and a domestic game in decline remain.

Paris 2009 was a fork in the road; if we qualified, would we have gotten results against South Africa, Uruguay, and Mexico, but fall to Argentina or South Korea in the knock out stages?

It’s the great defining incident of the modern era for Irish football, and one that will haunt us for years to come until the World Cup qualification hoodoo is lifted.