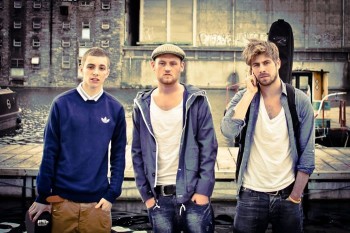 12th of April 2012 saw the UL RAG Society host RAGSTOCK charity gig in aid of Pieta House of Limerick for suicide and self-harm prevention. A mix of acts including Petri Chor and Ka tet were billed but The Original Rudeboys would be the much anticipated headline act.

Arriving late to The Stables I was a bit perturbed by the small crowd but big noise. The hard rock blaring from the warm up act was not drumming up much enthusiasm from the audience despite the musicians head banging efforts. However the main event was what I came for, so a drink later and it was time to push to front stage.

Sean “Neddy” Arkins, Robert Burch and Sean “Walshy” Walsh, or collectively The Original Rudeboys are the strange union of acoustic and hip hop with even a ukulele thrown in for good measure. Formed in March 2011, the quick release of their debut single Stars in Your Eyes saw the North Dublin boys take to the gigging circuit around the country drawing wide support and acclaim. Playing festivals such as Oxygen and the Leeds music festival the Rudeboys firmly established themselves in the music industry.

However tonight it was UL and the smaller stage of The Stables courtyard. Albeit not quite as large as the previous gigs the boys were in fine form and ensured the growing crowd a really great night of indie beats and treats. Starting with the song “Sunny Days” they set the right tone with the upbeat tempo but reflected the aim of the evening as it is a piece written about a friend who died from suicide. Original tracks including Bringing Me Down and Me and My Mind got a good reaction from the boisterous spectators as did covers of Crazy by Gnarls Barkley and Ed Sheeran’s The A-team and student favourite Little Lion Man by Mumford and Sons.

“Ukulele” chants rose around the venue as did spirits and waving arms; the success of the gig was assured by the gusto of the guys and the thronging mob. My only comment is that a relying on covers is acceptable for mediocre success however in long term reality they would need to eliminate their reliance on them during a live performance. Despite this the live performance is enough to get you hooked and lead to YouTube searches for their own eclectic sound. Infectious, unique and unusual, l The Original Rudeboys live up to their name; let’s just hope they can live up to their reputation of greatness that is starting to build.

The band’s debut album This Life is out now.

Girl with the Dragon Tattoo reveals torrent of sexual abuses