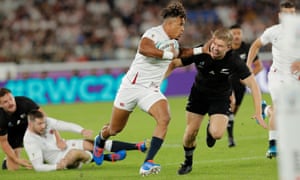 England and New Zealand faced off in a colossal Rugby World Cup (RWC) semi-final tie with both teams tipped to go all the way if they progress.

England came into the game on a run of fine form, having improved dramatically from their somewhat disappointing Six Nations earlier this year.

Before kick-off, they were 3-3 in World Cup games against the All Blacks, but if any team can beat them, it’s this England team.

New Zealand, fresh off their heavy dismantling of Ireland, would have been aware that a more complete team awaits.

Having laughed off Eddie Jones’ earlier comments on spying, Steve Hansen was confident his men could do what’s needed.

They also hoped to put the even RWC record between the two in their favour.

England had a very bright start with fantastic play.

A Tuilagi try was the end product for a tremendous display of passing, which Farrell converted.

Farrell seemed to further set an early tone, turning it over with a brilliant rip out of All Black hands.

England pushed into the All Black 22 with a kick.

A failed kick by Elliot Daly forced some fantastic defending from Jack Goodhue.

New Zealand looked set to punish the English with a turnover, but Tuilagi intercepted brilliantly, leading to Jonny May getting into the 22.

A penalty was given away when they lost possession, Itoje tackling high to stop the counter.

England sped into the New Zealand 22 after a fantastic Maro Itoje turnover, but lost the ball through a turnover as soon as they reached the 22.

New Zealand looked to punish with every attack, but England were quick in defence.

Another fantastic England play led to Sam Underhill breaking the line and getting the try. A TMO check for a dummy runner ruled it out, however.

A George Ford kick led to New Zealand barging into England’s 22 with some great offloading.

Itoje won the lineout to help clear for England. 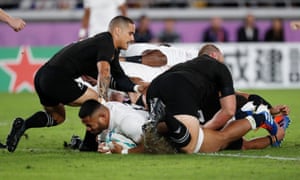 New Zealand looked to provide a deadly finish to the first half, but England’s fantastic defence prevailed and forced a penalty.

An unbelievable eight turnovers won in the first half.

George Ford added three from deep to give England a 10-0 lead to take into the second half.

Ford had an early chance in the second half to add three more but couldn’t pull it off.

English pressure forced a penalty in the All Black 22.

An interception by Reece threw a play into danger, but Ben Youngs intercepted Reece’s offload to keep the momentum with England.

Youngs then got over the line after some fantastic maul work.

A TMO check discovered an accidental forward pass in the maul, and the try was cancelled.

Sinckler came off after another fantastic game, replaced by Dan Cole.

The tactical kicking continued to lump pressure on the All Blacks, with Maro Itoje’s lineout dominance making the two the perfect combo for gaining ground.

Sevu Reece was left open after a brilliant pass from Sonny Bill Williams, but Tuilagi managed to get across and stop his run.

Ardie Savea got over the line after a smart lineout went to the openside, who had an easy path to the line.

Mo’unga made it seven, and New Zealand were back in it.

England looked to respond quickly, Underhill starting a move with a monstrous tackle to turnover, but Ford dropped it at an important moment.

Ford added three onto the board to redeem himself and widen the gap.

Youngs came off after a fine game, replaced by Heinz for the final 15 minutes or so.

Whitelock was penalised for an off-the-ball incident on Owen Farrell, who’s been on the receiving end of a number of them this RWC.

Ford put three more up with another brilliant kick from a distance, giving England a 12-point lead.

Another penalty granted Ford the opportunity to put three more on the board, but he couldn’t make it, not that it mattered as the game was already over.

They’ll face either Wales or South Africa with a bone to pick with both – Wales beat them to the Six Nations this year while the ghost of 2007 will linger against South Africa.

Their resolute defending, namely Itoje and Underhill, and deadly attack, courtesy of Youngs and Tuilagi, as well as brilliant kicking from Ford will make both teams fear them.

Steve Hansen’s New Zealand career will end with a third-place play-off after being humbled by the English.

They’ll be favourites to claim third but will be dissatisfied as they hoped to make it three-in-a-row. England made them look average.

A fantastic game of rugby that brings a fresh change of scenery for the final. Today, England showed the world how you beat New Zealand, offering an exhibition in near-perfect rugby.

What a RWC, but what a team Eddie Jones has. 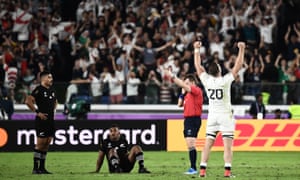