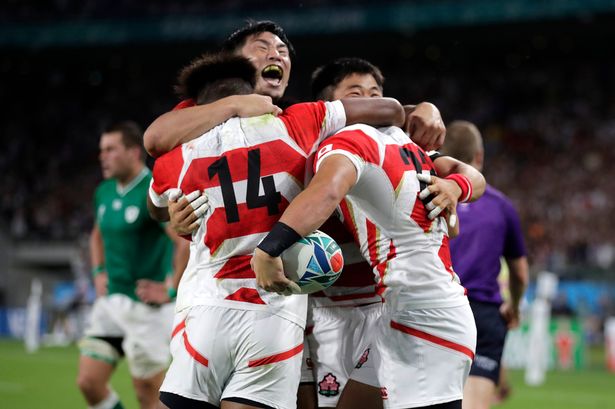 Ireland continued their Rugby World Cup (RWC) campaign with a game against Japan, but with Ireland being Ireland, veered off-script.

Ireland were viewed as favourites, being second in the world, but the Japanese were not to be underestimated.

Japan started off well also, with very confident handling on display. Tamura missed an early penalty to take the lead.

The breakthrough came in the 14th minute when Jack Carty’s Crossfield kick was taken down by Garry Ringrose who crossed the line for Ireland’s first try. Jack Carty missed his opening kick.

Japan strike back immediately after CJ Stander is penalised for offside. Tamura took the kick with ease to put Japan on the board and keep the pressure on Ireland.

Carty once again kicked, with Ringrose tapping it down to Kearney for an easy try.

Carty got it between the posts this time.

Japan didn’t back down and kept pushing Ireland to get back into the game.

They looked very dangerous whenever the ball was in their hand.

Leitch came on for Amanaki Mafi in an early change after Mafi went down.

Tamura got three more points on the board for the Japanese after Conor Murray was penalised for holding on in the ruck.

The Japanese kept the pressure on in midfield, with Tamura once again scoring after a penalty is forced.

Both teams started the second half equally strongly, entertaining the crowd with fantastic rugby.

A massive tackle from Dave Kilcoyne being the highlight of the first five minutes.

Japan pressed hard once again and looked very dangerous when in possession.

They won a penalty, courtesy of a knock-on, which Tamura put too far left and too short.

Ireland survived repeated attacks from Japan thanks to the likes of a knock-on.

They looked to be crumbling under Japan’s pressure.

Japan only needed a good pass to send them to the try line on various occasions.

Japan got over the line with Fukuoka getting the ball in a wide position to score – his 22nd try in 34 test matches.

Tamura’s brilliant conversion put the Japanese 16-12 up with 20 minutes remaining.

Ireland sensed the need for urgency and kicked into gear.

A Rob Kearney kick sent Matsushima into touch for an Irish lineout.

Pressure mounted on the Japanese but it was relieved when James Ryan was penalised for not releasing.

Tamura put an easy penalty over to put their lead to seven points.

A beautiful interception from Fukuoka killed the game off for Ireland.

Keith Earls spared our blushes further with a try-saving tackle.

A fantastic victory for Japan, who are now favourites to finish top of Pool A.

Another famous victory for a truly exciting Japanese side.

Ireland, on the other hand, were awful.

The ghost of World Cups past returned and consistent mistakes and fouls crept back into this side.

After this loss, Ireland are now looking at a possible match-up with New Zealand as their most likely quarter-final, if they get through.

This is the reason we love rugby, even if it was us on the wrong side of history this time.