An Focal’s Sean Finnan reports on today’s Round 2 offerings in the Six Nations. 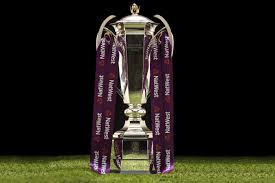 England welcomed Italy to Twickenham to kick off round two of this year’s Six Nations, with two teams looking to build on 2 mediocre showings from last week.

An England side that wasn’t allowed get up to speed against an effective Scottish defence, while Italy in this afternoon played an almost identical game to that against France last weekend – they started promising, got on the scoreboard early, and even took the lead this time out, but still looked a real threat against a strong opposition up until the 30-35th minute, when much like France a week prior, England seemingly flipped their collective switch and progressed into second gear, leaving the Italians racing the old royals Royce with a bicycle.

The pace from the likes of Anthony Watson and IQ of George Ford meant that England quickly unscrewed the pedals on the Italian bike in the last 15 minutes of the first half, leaving the likes of Garbisi left in no man’s land without any propulsion.

Garbisi’s disappointment shown with Anthony Watson’s interception just after the start of the second half, with the fly-half throwing his head up knowing that, yet again, for all their decent play for the first 25 minutes, they were still no match for a mediocre English performance.

Even with the early shock of Montanna Ioane’s try after 2 minutes, England didn’t have to muster much to produce a routine win against Italy.

The whipping boys of the six nations have progressed in terms of how they got beat before – no chance going into the game, started awfully, and were expectedly hammered – now, the only change in that formulaic line of events is that Italy has a habit of starting a game well but without steam to continue, like a train driver who uses parts of the engine instead of coal.

Even against a mightier opposition in France, a period sprouted in the game where much like the opening 20-25 minutes against England, Italy had found a spec of momentum and milked it for all its worth Garbrisi and Ioane were deadly when given the ball, the trouble is there were another 13 Italian men out on that field.

Until a single mistake from them(See Watson’s second try) or a single piece of intelligence from the opposition (See Elliot Daly’s attritional try) snatches the life out of the game as it then by that point turns into the formulaic Italian rugby game, where it’s picking up an easy winning bonus point, and who can pad their stats so they can make themselves look good.

Eddie Jones was content with the showing from England labelling their performance “a mixed bag,” but the toughest moment to take from today’s game was the severe knee injury suffered by England and Wasps flanker, Jack Willis.

The Gallagher Premiership Player of the Year was only on the field 5 minutes and had scored a try before his moans of anger rang around the empty Twickenham, the cruel but realistic nature of the game.

England entertain Wales next time out and must improve before them or face a strong possibility of letting their championship trophy fall out of reach.

Italy will welcome Ireland to the Stadio Olimpico in a fortnight and must use their energy wisely if they are to stand a chance against Andy Farrell’s men.

A generation-defining performance from Scotland last weekend put them in great stead with an elusive triple crown in their sights.

They faced a Wales side who had needed a reckless red card from Ireland to grind out an unlikely win.

Scotland held off from an early wales barrage to gain a real handle on the game, pinning the wales defence in their own 22 for much of the first half.

But the strength of the Scots’ defence, much as we saw against the English last week, showed that they didn’t come into this year’s Six Nations to fill up the numbers.

Their front line was aided by the slick Finn Russell who seemingly provided the right touch of class just when the Scottish attack needed it, and even the Scottish scrum, albeit against a second-string Wales side showed the fight and tenacity that made their win over England possible.

Scotland chiselled a 17-3 into the scoreboard after 30 mins after this strong start.

It was a lead which they truly deserved with the aforementioned versatile Finn Russel pulling the strings and the strained, but defiant beating heart of captain Stuart Hogg capped off with a morale-building performance from youngster Darcy Graham.

The loss of Leigh Halfpenny cost Wales significantly, missing unmissable chances, the tole of Wales’ lack of depth seemed to be too much for Wales head coach Wayne Pivac to manage.

However, Wales were given a lifeline from 20-year old Louis  Rees-Zammit at the death of the first half.

A try unconverted, but a try none the less, which was more than Wales could muster for the whole half, going back to their changing room nine points down.

The opening to the second half was a tight and cagey affair, with both sides conceding pens.

Wales finally dragged themselves to where they felt they had a hold on the play.

A feisty tackle on Darcy Graham from elder statesmen Alun Wyn Jones was the showcase of the highlights on both sides, with a daring young Scot vs the experienced but ageing Welshman, with Darcy winning on this occasion.

Darcy Graham wiggling away from Jones put the scots on the welsh try-line and soon came what looked like their reward after two scrums.

Gary Graham touched down but was chalked off due to Scott Cummings obstructing the welsh defence.

The resulting Wales lineout saw a magnificent maul that scattered the Scottish defence, still in shock over their chalked off try with Rees-Zammit finding Liam Williams to score, making it 17-15 to Scotland.

The decisive moment in the match came 5 minutes later with Zander Fagerson committing the same offence Peter O’Mahony committed against Wales in Dublin.

Wales wasted no time in their capitalisation of this advantage, as another effective maul drove Wyn Jones to score and put Wales ahead for the first time in the game but it was unable to be unconverted again

The string of substitutions allowed Scotland to steady themselves and push again, now behind.

A couple of penalties saw a scrum in Wales’ 22, with Stuart Hogg battling his way through two Welsh players to pull Scotland back in front. Russell added a peach of a conversion to further restore the lead.

The cagey affair of the start of the second half had evolved into blood-for-blood. Both Wales and the Scots could smell it and both went for the kill.

Rees-Zammit yet again created the spark out of nothing to add yet another layer of tension to the final 10 minutes with a wonderful score but, yet again, Wales missed the conversion, Wales were seeking to kill the game after attaining the one-point lead and strangle the belief out of the Scottish players.

But Scotland, as amazingly resilient as they were against England, were rewarded yet again, as Stuart Hogg broke the Welsh line and was away, only for him to fail to find his feet after squeezing his way through. Rees-Zammit kicked the ball back to the Scottish 22 for a lineout.

With the clock in the red, Scotland needed a miracle to make the 75 meters for a try. They battled and bruised their way to the Welsh 22 only for it to be stolen, and with it, their hopes of a triple crown, or maybe even a grand slam, were dead as disco, with the French up next for Gregor Townsend’s side.

Wales, on the other hand, have a surprising opportunity to win the Triple Crown for the 22nd time when they face England in round three and may have raised fans’ championship hopes too.